“Unless the Lord builds the house, the builders labour in vain.”

The outcome of the UK General Election on 12 December will determine the future course of Britain in a way that cannot be overstated.

Over recent months we have witnessed an unprecedented series of events that have tested the robustness of the UK Parliament. This has led to arguably the most significant election of this generation, an historic vote that will affect us all.

At the epicentre of the Houses of Parliament is the Central Lobby, where MPs and peers congregate, journalists roam for interviews and visiting public marvel at the impressive heritage of the “mother of parliaments”. Under their feet within the large mosaic on the floor is the Latin inscription of the first verse of Psalm 127: “Unless the Lord builds the house, the builders labour in vain.”

This verse couldn’t be more appropriate for these times. It is one of many examples of Scripture incorporated within the architecture of Parliament, unnoticed by many, that remind us that Britain has a bright future if it builds on a foundation that honours the Lord. Politicians, the media and the public – the three groups that gather over this Scripture – must all be reminded of the importance of this truth.

From the standpoint of supporting Israel, our hope and prayer is that the UK will stand on the foundation of the Bible and strengthen our nation’s relationship with the Jewish state.

At CUFI, we cannot emphasise enough the importance of Britain standing with Israel on every front. We are also hurting on behalf of our Jewish brothers and sisters over the rise of anti-Semitism in this country and are very concerned about the real threat to the UK’s relationship with the Jewish state if Jeremy Corbyn became Prime Minister. The UK currently benefits from a close partnership with Israel. Any damage to this relationship deployed by a future Corbyn government would have devastating consequences.

There is a war being raged against Israel and the Jewish people but ambassadors of truth are rising up in our nation. The Bible commands in Genesis 12:3: “I will bless them that bless thee, and curse him that curseth thee: and in thee shall all families of the earth be blessed.”

CUFI recently launched our “For Zion’s Sake” campaign ahead of the General Election. We highlight 12 principles (see below) that we would like to see the next Government adopt in their approach to Israel and combating anti-Semitism in the UK.

There are three actions we invite you to take:

1. Ask your local candidates, or the candidate you intend on voting for, to pledge to the 12 principles or ask which they can commit to. Click here to act

2. Use the 12 principles as strategic prayer points in the lead up to the election and in the weeks and months that follow. Download our prayer card here

3. Make sure you vote on 12 December if you are eligible to do so.

Please also connect with us on Facebook and Twitter where we are equipping you with important information ahead of going to the ballot box and will be expanding on the 12 principles in greater detail.

“For Zion’s sake” we will not keep silent. We will not allow this election to pass without sharing the truth about Israel and holding our next Members of Parliament to account for how they treat Israel and the Jewish people.

Thank you for your on-going support. 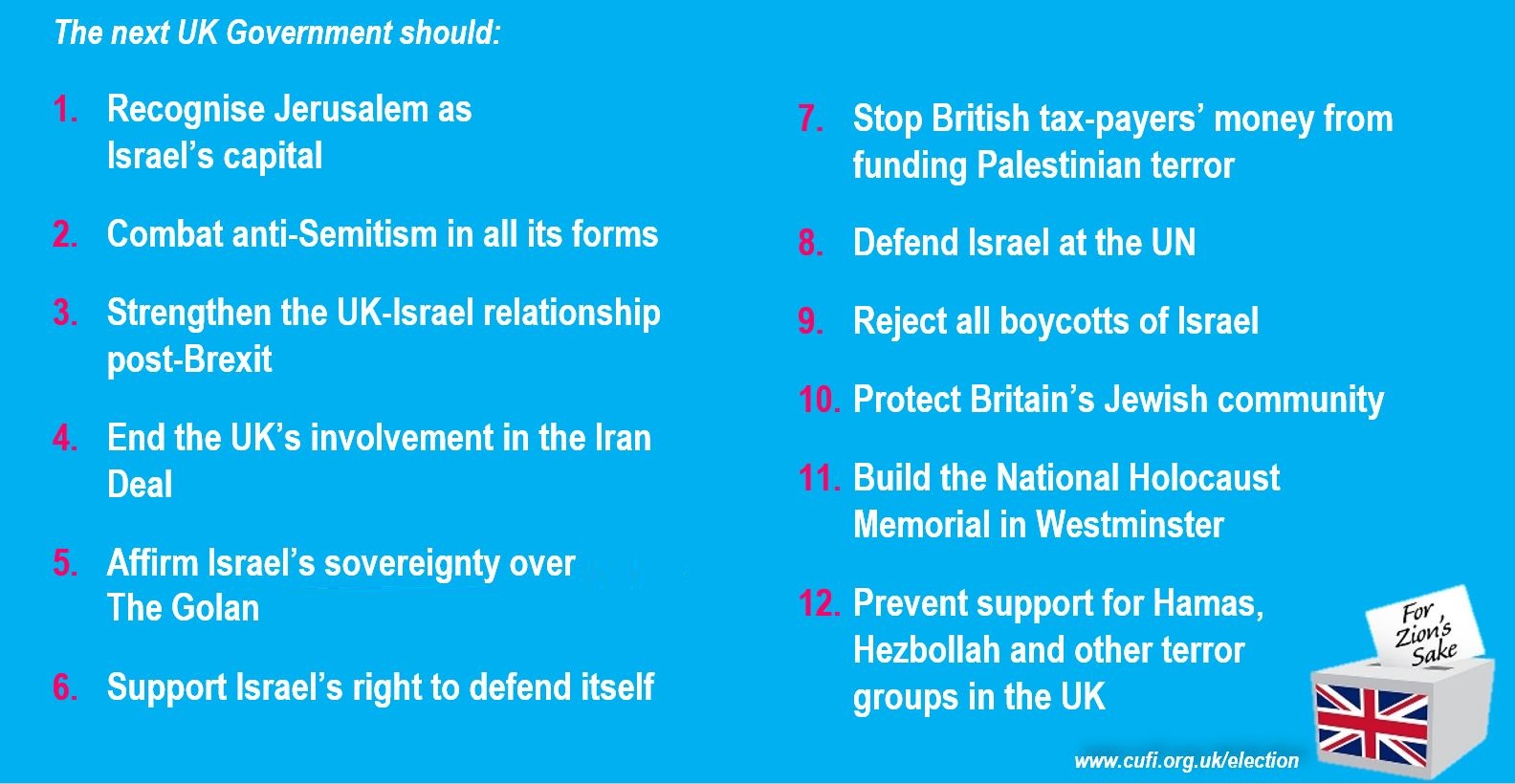