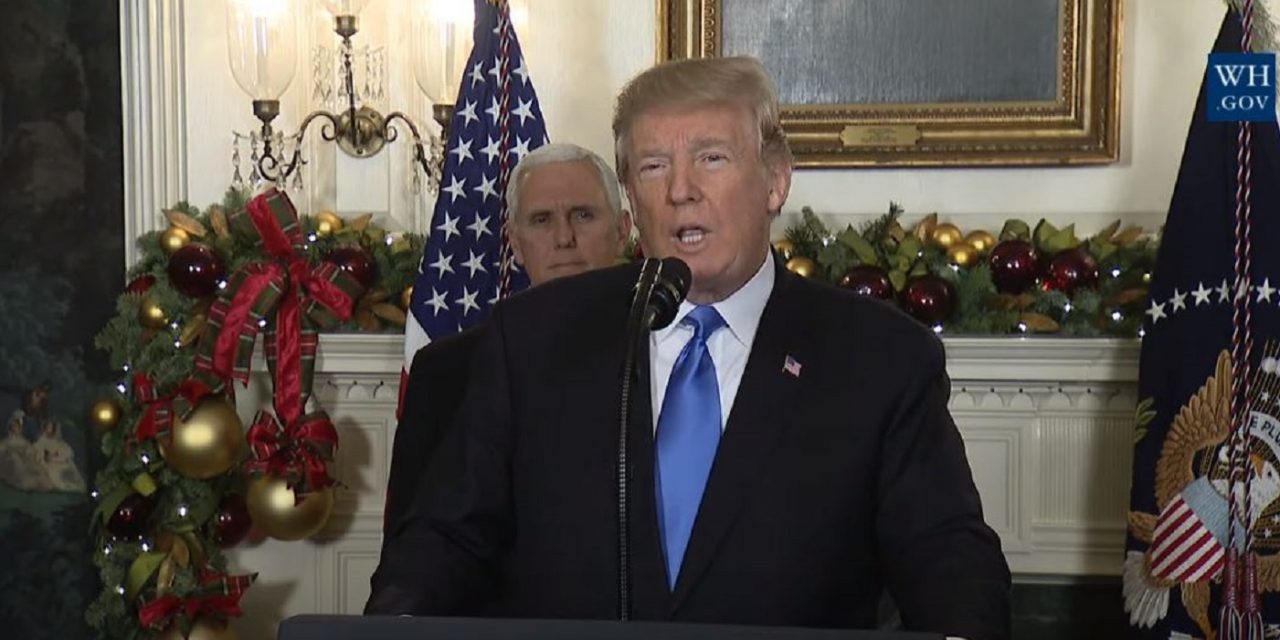 After months of speculation, US President Donald Trump has followed through with his election promise of moving the US embassy to Jerusalem.

The United States will now become the first country to relocate its embassy to Jerusalem in a move that effectively gives American recognition to the Israeli capital.

President Trump Recognises Jerusalem as Israel's Capital and A…

Watch as President Donald Trump officially recognises Jerusalem as the capital of Israel and announces that the American Embassy will be moved to Israel's capital, Jerusalem!Praise the Lord! This is Biblically the right thing to do and we are sure God will honour President Trump for making this decision.#Israel #Jerusalem #Embassy #USA #Trump #PrayforTrump #PrayforIsrael #CUFI

Earlier this year Christians United for Israel’s founder, Pastor John Hagee, joined with 60 other Christian leaders and organisations in signing a letter to President Trump. CUFI’s message was simple: “We believe the time has come, at long last, to uphold American law by moving the U.S. Embassy to Israel’s eternal and indivisible capital city of Jerusalem.”

American Christian Leaders for Israel organised the letter, which encouraged President Trump to fulfil his campaign promise to move the embassy.

CUFI Action Fund Director, Gary Bauer said, “Congress voted in 1995 to relocate the U.S. Embassy to Israel’s capital city.  It was not a controversial issue.  It passed the House 374-to-37 and passed the Senate 93-to-5.  In spite of that overwhelming support, however, our embassy remains in Tel Aviv.  And because of that, Israel’s enemies continue to deny Israel’s sovereignty over Jerusalem, as well as the Jewish heritage of Jerusalem.  In doing so, they also deny the historical roots of Christianity.”

“On December 6, 2017, President Trump will recognize that Jerusalem is the capital of Israel,” one official said, confirming a series of reports on Trump’s planned speech from the White House, slated for 1 p.m. Wednesday ( 8 p.m. in Israel). The officials spoke on the condition of anonymity.

“He views this as a recognition of reality, both historic reality and modern reality,” one official said.

“While President Trump recognizes that the status of Jerusalem is a highly sensitive issue, he does not think it will be resolved by ignoring the truth that Jerusalem is home to Israel’s legislature, it’s Supreme Court, the Prime Minister’s residence, and as such, it is the capital of Israel,” one of the officials said.

The announcement will mark a major milestone for Israeli efforts to gain international legitimacy for their claim on Jerusalem. Israel calls Jerusalem its undivided capital, but the international community has refrained from recognizing it as such pending final status negotiations with the Palestinians, who claim the eastern half of the city as their own seat of power.