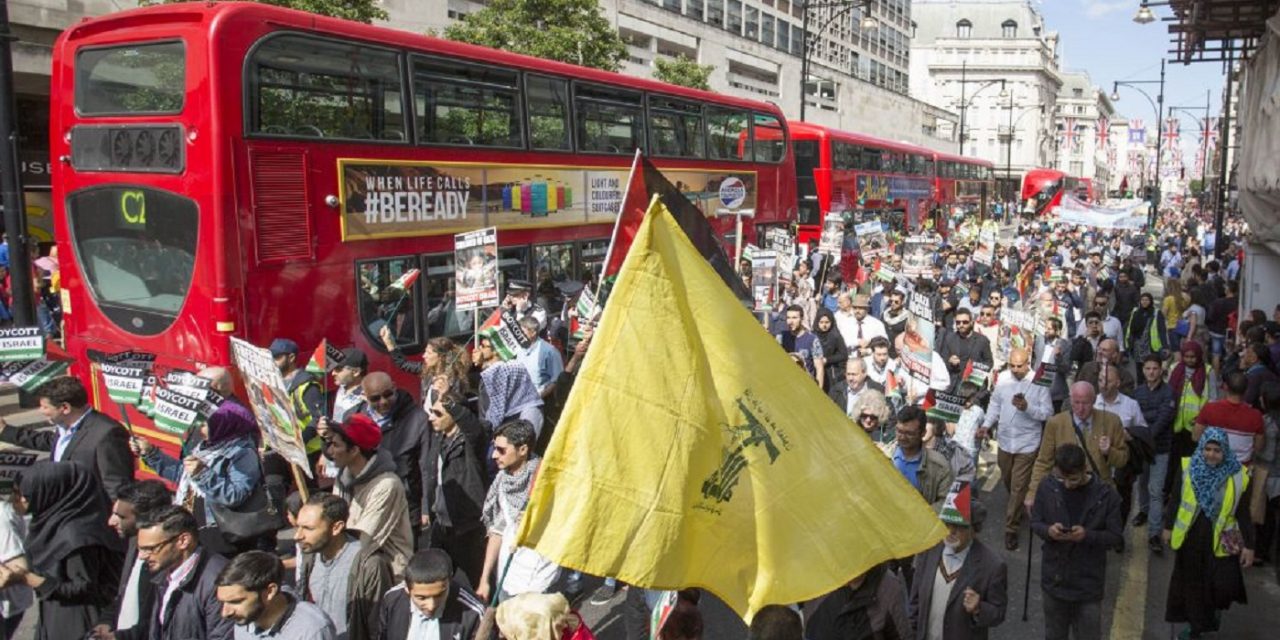 Hezbollah flags to be paraded in London at the anti-Israel Al Quds Day March – ACT NOW!

The Al Quds Day March is scheduled to be held in London on 18 June 2017. Previous Al Quds Day marches have seen displays of support for Hezbollah, an anti-Semitic terrorist organisation. This has caused great distress to the Jewish Community. Al Quds Day is an annual day chosen by the late Ayatollah Khomeini to call for Israel to be destroyed… it is happening on the streets of our capital.

Our friends at North London Friends of Israel, together with We Believe in Israel, have initiated a campaign emailing the Mayor of London asking him to take action on this issue and invite you to join us in getting behind it.

We cannot allow this to go ahead unchallenged. Please join us in supporting the Jewish community in London and taking a stand against those that support terror against Israel.

If you have any problems with our automated email, please copy and paste the following and send to: [email protected]

I am writing to you in your capacity in charge of the Mayor’s Office for Policing and Crime (MOPAC).

I am writing to express my concern about the Al Quds Day March, scheduled for 18 June 2017. Previous Al Quds Day marches have included overt displays of support for Hezbollah, an illegal antisemitic terrorist organisation. This has caused great distress to the Jewish Community in London and the UK.

Al Quds Day is an annual day chosen by the late Ayatollah Khomeini to call for Israel to be destroyed. Iranian leaders are clear that Al Quds Day is not just about supporting Palestinian rights. The former Iranian President, Mahmoud Ahmadinejad, said:

“The Al Quds Day is not merely a strategic solution for the Palestinian problem, …. any freedom lover and justice seeker in the world must do its best for the annihilation of the Zionist regime.”

Last year, on Sunday 3 July 2016, Hezbollah flags were carried and waved by participants in the Al Quds Day March. There were also placards with the words “We Are All Hezbollah”.

Then Home Secretary, Theresa May, gave clear guidance on hate crime to all police forces that makes specific mention of antisemitism and confirmed that holding Hezbollah flags is a criminal offence in accordance with Section 13 of the Terrorism Act 2000. The act states that people who ‘wear clothing or carry or display articles in public in such a way or in such circumstances as arouse reasonable suspicion that an individual is a member or supporter of the proscribed organisation are guilty of a criminal offence’. Hezbollah’s External Security Organisation was proscribed in March 2001 and in 2008 the proscription was extended to Hezbollah’s Military apparatus including the Jihad Council.

Hezbollah is a deeply anti-Semitic organisation. Robert S. Wistrich devotes an entire chapter of his history of anti-Semitism, ‘A Lethal Obsession’, to Hezbollah.

Since your election you have worked hard to build cohesion between different faith groups in London.

As part of this you have spoken out strongly against anti-Semitism.

I am aware that you are not in charge of the day to day operations of the Metropolitan Police, but given the ideology behind the Al Quds Day March, and the display of support for Hezbollah by participants last year, will you demonstrate public leadership regarding criminal charges for those showing support for Hezbollah and call for appropriate conditions to be placed on the march by the Police?

I await your reply on this important matter.