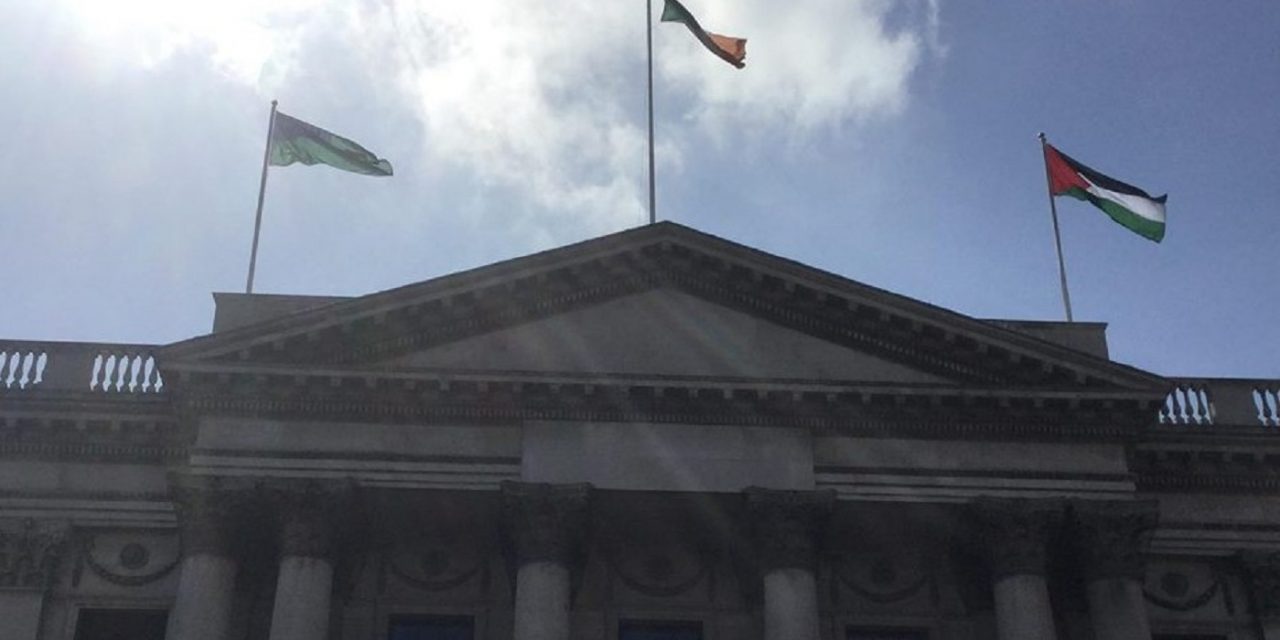 Dublin City Council has decided to fly the Palestinian flag for an entire month above its City Hall building in what Irish supporters of Israel say will have an ‘extremely negative impact’ on the country’s image.

It comes after 42 councillors voted in favour of the “people before profit” motion, proposed by Cllr John Lyons, who said that 50 years of occupation had left Palestinians living “under a form of apartheid, much worse than South Africa”. Another 11 councillors voted against the motion and seven abstained.

Israeli Ambassador Ze’ev Boker wrote to city councillors asking “what kind of message such a gesture sends to Israelis who are proud to now call Dublin their adopted home” before stressing the harm it could cause.

Boker said the move was “highly politically charged,” adding: “I also know that some members of the Irish Jewish community are concerned by the negative message that the flying of the flag promotes.”

A spokesman for grassroots group Irish4Israel said: “We believe such a move will have an extremely negative impact on Dublin’s international image and tourism. The only flags that should fly over an Irish City Hall is the Irish and local county flag.”

They added that councillors were “ignorant,” adding: “It is quite staggering and almost admirable that these public figures spoke with such arrogant conviction, while having such little historical knowledge of the conflict and its complexities.”

Most of councillors who supported the motion were from republican party Sinn Fein, and while a compromise motion – to fly both the Israeli and Palestinian flag – was proposed by a Fine Gael councillor, this motion was overwhelmingly defeated.

Maurice Cohen, Chair Jewish Representative Council of Ireland told Jewish News: “We are indeed disappointed by this decision which panders to a few left wing politicians to further their own agenda. We do not believe that it is within the remit of the City Council to take these actions and it diverts them from representing the views of their constituents on the Dublin City Council on local matters for which they have the Councillors have been elected. We believe that the vast majority of Irish & Dublin people understand that the Middle East situation is one of enormous complexity.

“Councillors may feel that by raising the Palestinian flag it shows solidarity. That it may indeed do. But they ought to have asked themselves whether it advances the cause of peace one bit or improves the lives of anyone one bit. Of course the answer is it doesn’t, and it only serves to reinforce the Israeli belief that Ireland is not a candidate for helping them bring about peace, despite the huge cooperation in Industry and Commerce and research between the two countries”.