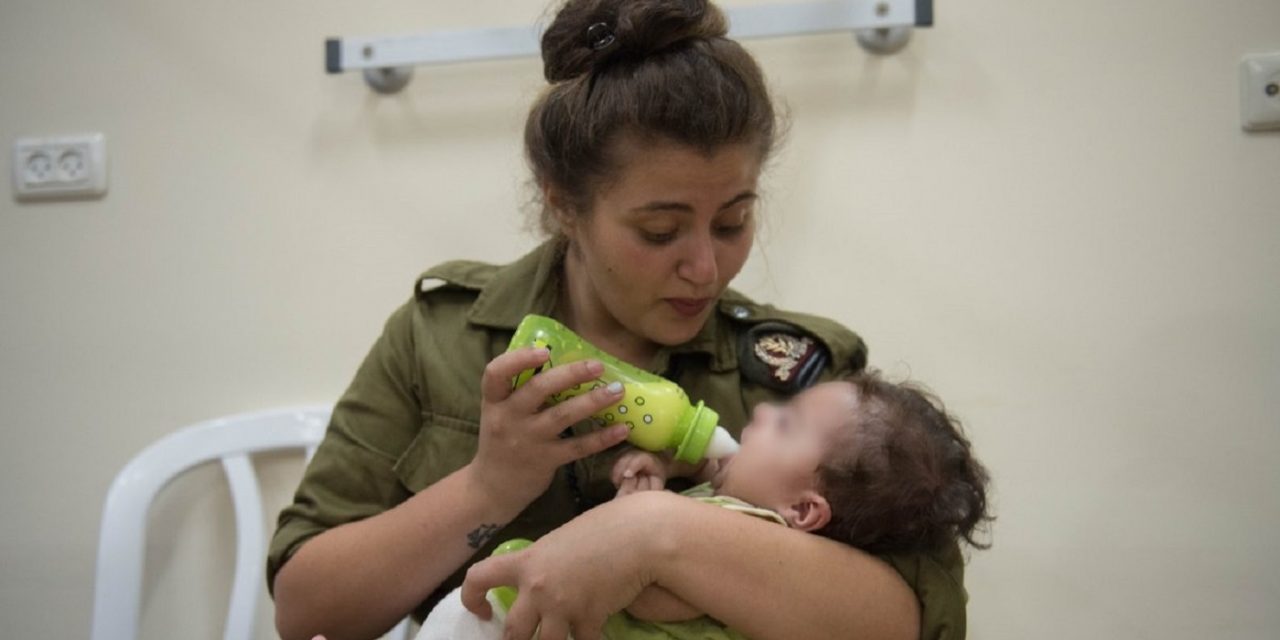 “Israel was thought of as the enemy… Now that you are helping us, most [on the Syrian side of the Golan] are with you. They love Israel. They see the true face… the reality.”

These are the words of a Syrian mother of a child receiving treatment in Israel. In a secret mission named “Operation Good Neighbor”, she is one of many families whose lives have been transformed by Israel’s humanitarian help. According to latest official estimates, the operation has provided medical treatment to more than 4,000 Syrians, including 1000 children.

The scope of the mission was virtually unknown until it was revealed by the IDF this summer. What started as an ad-hoc measure to treat Syrians who came to the border asking for help from Israel, the effort developed into an expanded program in June 2016 as humanitarian needs continued to grow.

“Too Zionist for British TV”

Yet, this incredible story of compassion has been completely ignored by the British mainstream media.

The film producers were given unprecedented access by Israeli security forces and medical officials and featured interviews with both medics and patients who were offered pioneering surgery on often horrific wounds at hospitals in Nahariya and Safed in the Western Galilee.

Its producer, David Cohen revealed that discussions over purchase of the film with both the BBC and Channel 4 had so far proved fruitless

Mr Cohen, who has directed numerous TV shows in the past , said: “The feedback seems to be that the film is being very well received – but that this subject matter is not their priority.

“I have heard it suggested from one channel that the film is deemed to be too easy on Israel.  It is my interpretation that it was felt to be too Zionist.”

Andrew Percy suggested it was becoming increasingly hard to secure coverage of positive Israeli humanitarian efforts such as that on the Golan Heights border because media organisations were always quick to raise alleged negative issues affecting the nation such as the crisis in Gaza.

In moving scenes a young man who was a nurse in Syria  and who was given pioneering face transplant surgery was interviewed.

Medics described the harrowing ordeal of treating wounded men, women and children who cross the border, often in secret, to be treated in Israel, and then not being able to learn of how they manage to return to everyday life once they leave hospital and return to Syria.

One young male patient admits: “In Syria we are taught that Israel is the enemy – but all I have seen since I have been here is humanity.”

Mr Cohen told the Jewish Chronicle: “I am not sure there is another example to be found a humanitarian effort like this. Israel and Syria are two enemy states, and yet a decision has been made by the Israelis to provide help to those on the other side hurt by this horrendous war.”

As a part of Operation Good Neighbor, the IDF has helped nearly 1,000 Syrian children in need pic.twitter.com/RkjFWCcFUP

Additionally, the IDF is facilitating the construction of two clinics within Syria that will be run by local residents and NGOs to support some 80,000 Syrians living near Israel’s border in the Golan Heights region. Another clinic is being constructed on an IDF outpost on the Israeli side of the border.

“Our goal is to provide security and create good neighborly relations for people on both sides of the border,” Lt. Col. E (full name withheld for security reasons), the commander of Operation Good Neighbor, told JNS.org. “We will continue to do so in the best and most efficient way possible.”

Meanwhile, new footage was broadcast on Sunday night by Hadashot News (formerly Channel 2). For the first time, the IDF allowed a news crew to document the entry of refugees from the Syrian civil war to receive medical treatment in Israel. Those filmed were a group of mothers and their children who came to the border and were transported to an Israeli hospital for medical treatment.

“It has become unremarkable for Syrian civilians to come to Israel for treatment,” one mother told the TV interviewer. “Everyone wants to come here. Adults too; not just the children.”

None of the faces of the Syrians were shown in the report, since the mothers and children will return to Syria when doing so is medically possible, and could face deadly repercussions if their treatment in Israel were to become known.

The TV report said 21 mothers and 23 children crossed the border on the recent night when the camera crew was allowed to film, and that the cases for treatment were selected by doctors in Syria. Several of the children were suffering with shrapnel wounds. One had severe asthma, for which his mother said no effective treatment was available in Syria. 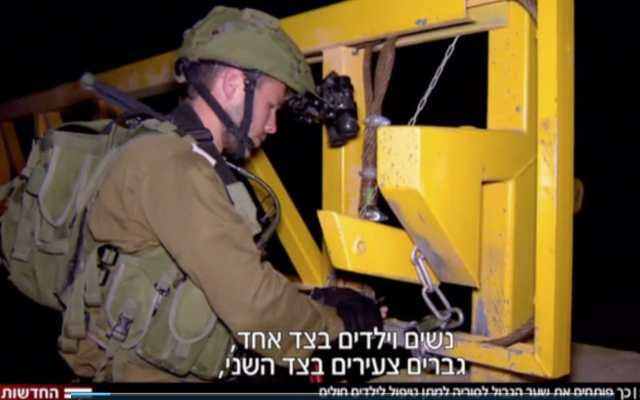 The footage included tense minutes when the entry to Israel was being coordinated across the fence. The Syrian civilians were then shown walking across the border — carefully watched by armed IDF soldiers — then boarding a coach, with an accompanying ambulance, en route to Ziv Hospital in the northern Israeli town of Safed. The mothers wore headscarves and long coats; many of the children wore jeans.

“This must be very strange for them,” an IDF officer named Gil Giladi said at the border. “They’re dealing with ‘the enemy.’”

Speaking to the TV reporter, one Syrian mother said that, in the past, “Israel was thought of as the enemy… Now that you are helping us, most [on the Syrian side of the Golan] are with you. They love Israel. They see the true face… the reality.”

So who do they think of as “the enemy now?” the reporter asked.

“All of them: Islamic State, Hezbollah, Bashar [Assad]. They’re all the same,” answered one of the mothers.

No specifics were presented on where exactly in Syria the patients had come from, but one of the mothers said that the area where she lives is controlled by the Islamic State terrorist group, and that if any woman in that area leaves home with her head uncovered, she faces death.  “They execute people next to the mosque,” she said.

Footage in Ziv hospital showed an Israeli medical clown entertaining the children, as Sergei Kotyakov, a senior army officer in the Operation Good Neighbor initiative, described how the Syrians, initially wary, gradually come to realize “that nobody is going to harm them here. Quite the reverse. We’re here to help and provide assistance…. Then they start to talk, and to describe what they’ve been going through.” 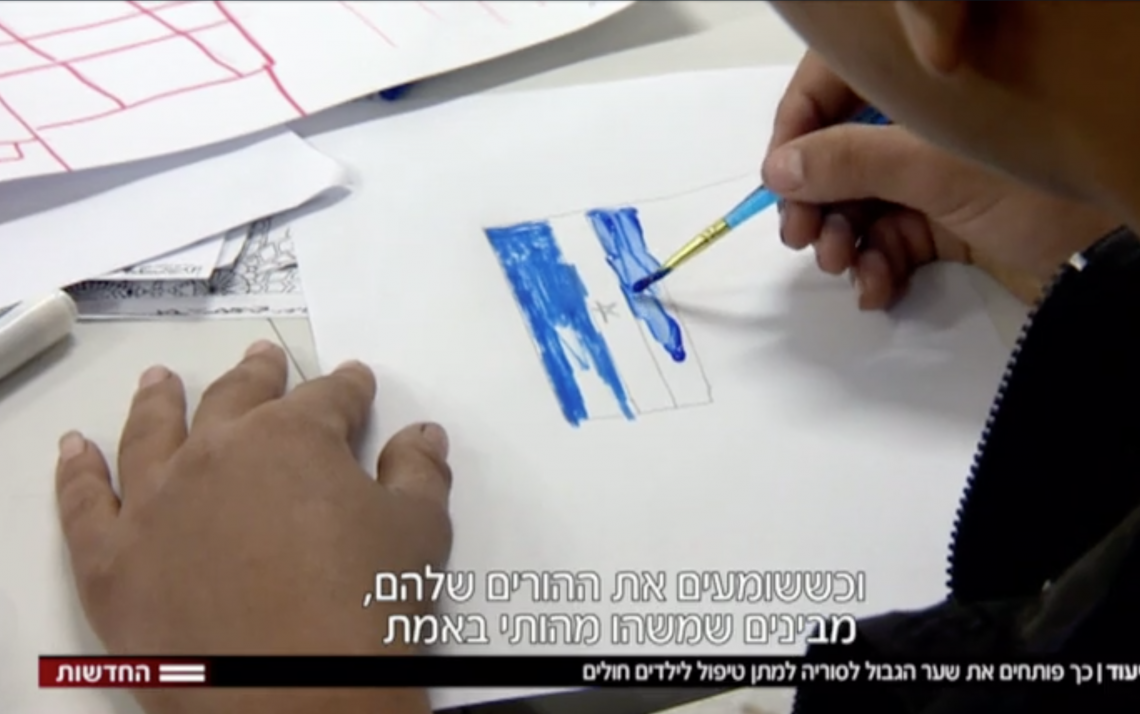 The report included clips of the Syrian children in the hospital drawing paintings, some of which featured Israeli flags.

“I wish we could stay here for good,” said another of the interviewees. If the border to Israel was open, “I’d be the first to cross,” she said.

“How many Syrians would follow?” the reporter wondered. “Would it be millions?”

“All of Syria would follow me,” she replied. “All the civilians left in Syria would come.”