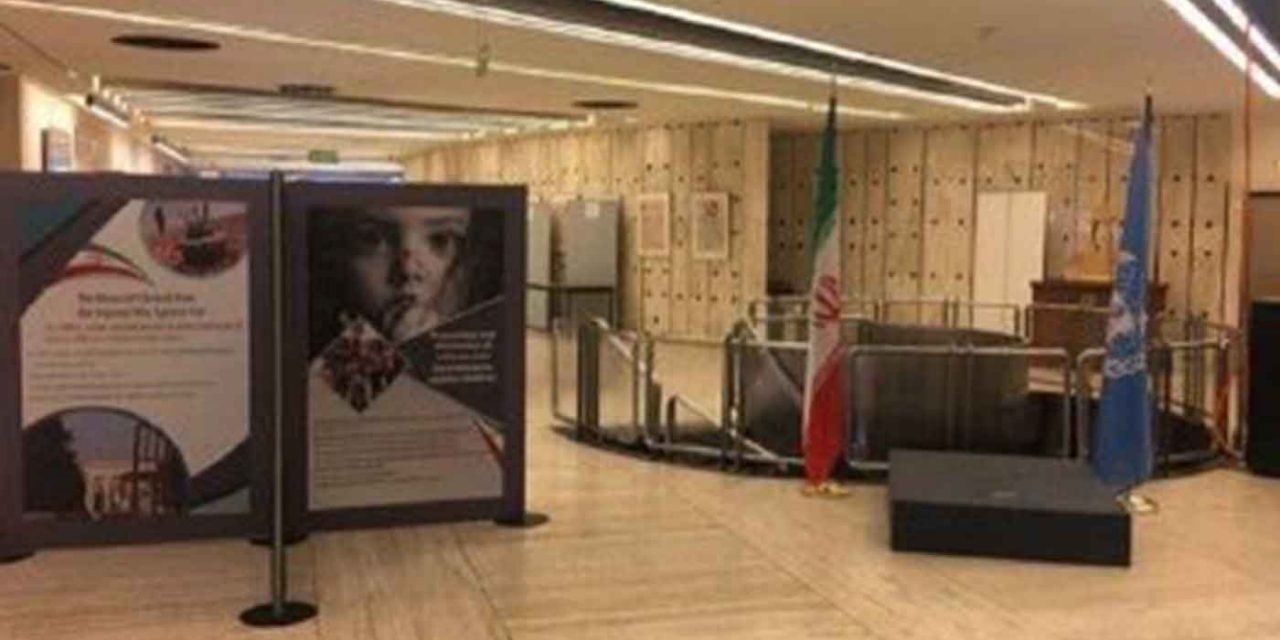 Iran, the world’s premier state sponsor of terrorism and a country attributed with an atrocious human rights record, debuted a five-day exhibit on its “human rights achievements” at the United Nations last week.

“The promotion of human rights [is] the Islamic Revolution’s raison d’être,” declared Iran’s foreign ministry in a statement published Thursday, highlighting a five-day exhibition of slides and posters celebrating its “human rights achievements” at the United Nations Office in Geneva, Switzerland.

Iran’s foreign ministry shared images of its UN display via its Twitter profile:

An exhibition of the Islamic Republic of Iran’s achievements in the field of human rights has opened at the United Nations Office in Geneva on Monday, November 4.https://t.co/TWhPwxDrTg pic.twitter.com/n3xSroQ053

“Neither the eight-year imposed war nor the wave of terrorism could divert the Islamic Revolution away from the path to democracy and regard for the people’s human dignity,” said Esmaeil Baqaei Hamaneh, Iran’s envoy to and representative at the U.N. in Geneva.

“[The exhibition showcases] Iran’s advances in supporting and promoting human rights in various areas, such as the women’s rights, children’s rights, rights of religious minorities, respect for cultural and ethnic diversity, and rights of disabled persons,” claims Iran’s foreign ministry.

“Preserving human rights is at the hard core of the Islamic Revolution,” according to Mehr News Agency, an Iran-based and state-aligned news media outlet.

U.S. sanctions on Iran are violative of “human rights,” according to Iran, describing its subjects as entitled to a “right to health” and “right to access to medication.”

The Iranian state describes itself as “based” on “principles of independence, freedom, and progressive Islamic beliefs,” as well as “the principles of democracy.”

There are two points here to make. First. Iran’s claims of being an advocate for human rights is disgraceful. The Iranian Regime is one of the world’s worst abusers of human rights.

According to Amnesty International, Iran arrested over 7,000 dissidents in 2018, killing at least 28 of them. Death row inmates in Iran have their organs harvested “voluntarily” before or after execution. In April, Iran sentenced an award-winning female human rights lawyer to 148 lashes and 38 years of imprisonment for defending Muslim women’s prerogative to remove the Islamic Republic’s mandatory hijab in public.

Iranian women are banned from watching football matches. Earlier this year an Iranian woman killed herself by setting herself on fire because she was due to be in court over trying to enter a football match. She did not even manage to enter the game but was due to go to court and would likely have been severely punished simply for trying to watch a game of football.

There are dozens of examples where women have removed their hijab and been arrested and are either never heard of again or beaten, raped or imprisoned for long periods of time. There has also been a number of cases where Iranian police have brutally suppressed minorities, carrying out public executions of gay people and more. Not to mention the situation with Nazanin Zagari-Ratcliffe, the British-Iranian woman who has been imprisoned for a number of years on false charges against her.

This is no to mention the actions of the Iranian regimes terrorist proxies such as Hamas and Hezbollah who are responsible for the deaths of hundreds of civilians at the direct command of Iran’s Ayatollahs. And let’s not forget this year Iran has conducted numerous attacks and illegal kidnappings of civilian ships and their crews, including the British flagged Stena Impero oil tanker.

The second point is why would the United Nations host such an exhibition knowing that Iran is such a vile abuser of human rights.

The United Nations has lost its moral compass. As US Ambassador to Germany Richard Grenell said, “This type of propaganda on display in the lobby of the U.N. is disgusting and morally bankrupt.”

An Israeli firefighting delegation, comprised of C-130J Hercules transport planes, took off for the island of Cyprus to help put out fires that are spreading in the north of...
Read More
Share
Tweet
Email
More
376 Shares