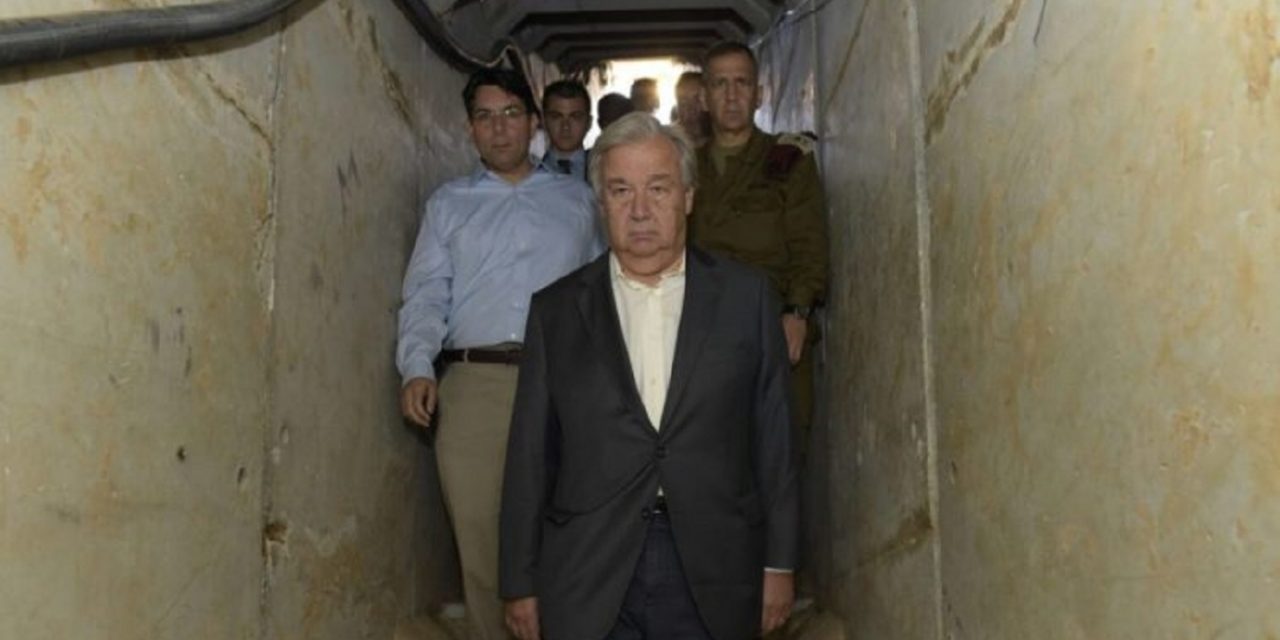 On the last day of his three-day visit to Israel, United Nations Secretary General António Guterres toured the Israeli-Gaza border region by helicopter Wednesday, including a Hamas terror tunnel. The UN chief was accompanied by Israeli Ambassador to the United Nations Danny Danon and IDF Deputy Chief of Staff Aviv Kochavi.

Guterres, who is making his first visit to the region since taking office in January, also met with residents of Israeli border communities, who told him about the threats they face from Hamas-controlled Gaza.

“Hamas continues to arm itself in order to harm Israel as it exploits the generous humanitarian aid provided by the international community,” Danon told Gutteres. “They have turned the residents of Gaza into hostages and invest resources into digging murderous terror tunnels.

“At the same time, the Israeli residents of the border communities have stood strong in the face of terror threats, as they build prosperous communities and help further develop the region for the betterment of the next generation,” Danon said.

Guterres’ tour of the border area was followed by a visit to Gaza, where he appealed for Palestinian unity and ordered $4 million to be given in aid to the Hamas-ruled Strip from the UN’s emergency relief fund.

Residents of Kibbutz Nahal Oz had presented Guterres with a book of drawings by Israeli kindergarten children, which they asked him to give to children he meets in Gaza, Times of Israel reported.

Four-year-old Daniel Tragerman was killed on August 12, 2014 — two weeks before an open-ended ceasefire between Israel and Hamas was reached — when a fragment from an exploded Hamas mortar shell penetrated the wall of his house in Kibbutz Nahal Oz and struck his head.