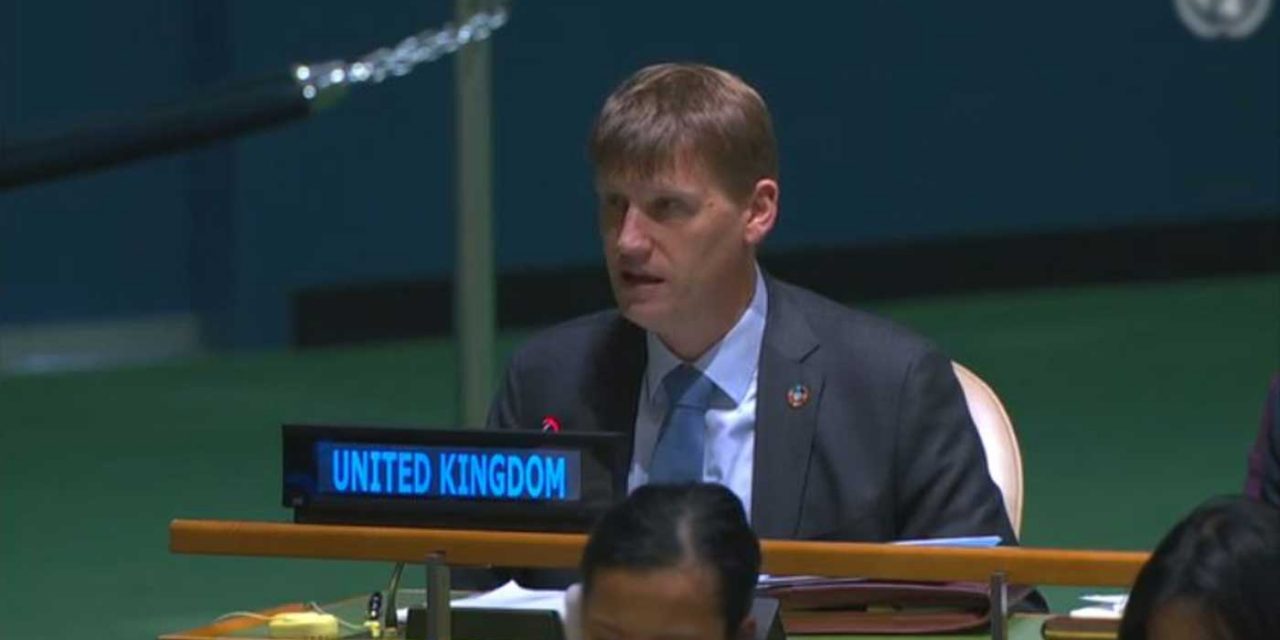 The United Kingdom has voted in favour of giving the so-called “State of Palestine” additional power at the United Nations in order to lead the G77, the largest voting bloc at the global body.

It is a mistake for the UK to support this bill. By doing so, the UK is rewarding the Palestinians with a position of power that they have not earned (and by UN rules, should not be allowed to obtain). This kind of support works against bringing the Palestinians to negotiate peace with Israel and rewards Palestinian terrorism.

The General Assembly on Tuesday voted by an overwhelming majority to temporarily grant the “State of Palestine” additional rights and privileges as it leads the G77 in 2019.

Resolution A/73/L.5 received a total of 146 votes in favour, three votes against and fifteen abstentions. The three countries who opposed the bill were the US, Israel and Australia. 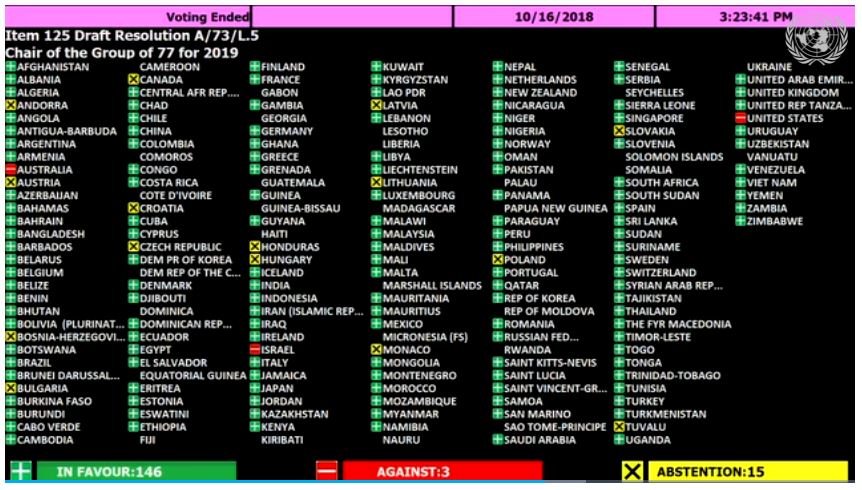 “Palestine” will be able co-sponsor proposals and amendments, make statements, and raise procedural motions.  They will have these extra rights for the duration of its chairmanship of the Group of 77, the largest bloc of nations at the UN, which is made up of 134 countries including all South American, African and Asian countries, including China.

The Palestinians will assume the bloc’s presidency on 1 January, 2019, and hold it for one year.

Unfortunately, the United Kingdom voted in favour of this motion.

Ambassador Jonathan Allen, who is the UK Deputy Permanent Representative to the UN, said after the vote:

“The United Kingdom welcomes the fact this resolution is limited in time to the duration of the Palestinian leadership of the group of 77 and limited in scope to the functions necessary to carry out that role. For these reasons we voted in favour.

Our vote today is to enable the effective Palestinian chairmanship of the G77, and should not be misconstrued as recognition of a Palestinian state.

We reserve the right to recognise a Palestinian State bilaterally at a time when it best serves the objective of peace.

Ultimately, the only way to give the Palestinian people the state that they need and deserve and to give the Israeli people the security and peace they are entitled to through a negotiated two-state solution.”

The UK representative was keen to stress that the UK only voted in favour of this in order to help the Palestinians fulfil their role and that it does not show recognition of a “State of Palestine”.

Whilst the UK representatives may see this as just a formality, we strongly disagree and see the UK’s actions as working against the aims of bringing about peace between Israel and the Palestinians. The UK should have at the very least abstained from this vote, but in reality, we would have preferred a vote against it.

The Palestinians have long pushed for recognition at the United Nations and in other global bodies in order to get global recognition and political powers that they can use to demonise Israel. There is unfortunately very likely the Palestinians will use every opportunity at the head of the G77 to table motions against Israel in their continued campaign to delegitimise the Jewish state.

US Ambassador Nikki Haley said the UN should not have been able to give these powers to the Palestinians, stating that the “Palestinians are not a UN member state or any state at all” and should not be granted privileges reserved for full-fledged members.”

“Today’s UN mistake undermines the prospects for peace by encouraging the illusion held by some Palestinian leaders that they can advance their goals without direct peace negotiations,” said Haley in a statement.

Israel’s Deputy Ambassador to the UN Noa Furman said the resolution “clearly weakens and undermines the UN.” Despite the claim that it is technical in nature, the document gives the Palestinians rights beyond what is necessary to preside over the G77, she charged, accusing Ramallah of a “pattern of manipulative behaviour.”

“When the Palestinians speak as chair of the G77 in the General Assembly, we will remind our fellow member-states that the United States does not recognize that there is a Palestinian state and that no such state has been admitted as a UN member state,” he said.

Germany and the Netherlands also spoke out after the vote and echoed the UK’s comments that this vote should not be seen as recognition of Palestinian statehood, again showing their misguided views alongside our own.

As expected, the Palestinian Ambassador Riyad Mansour was jubilant in his speech, stating that the “State of Palestine” would do its best in its responsibilities “for the common good of all humanity”. Which is strange, because all humanity includes Jews, and the “State of Palestine” refuses to allow a single Jew to dwell in the land that they claim to have the rights to.

You can watch the full discussions and vote below: