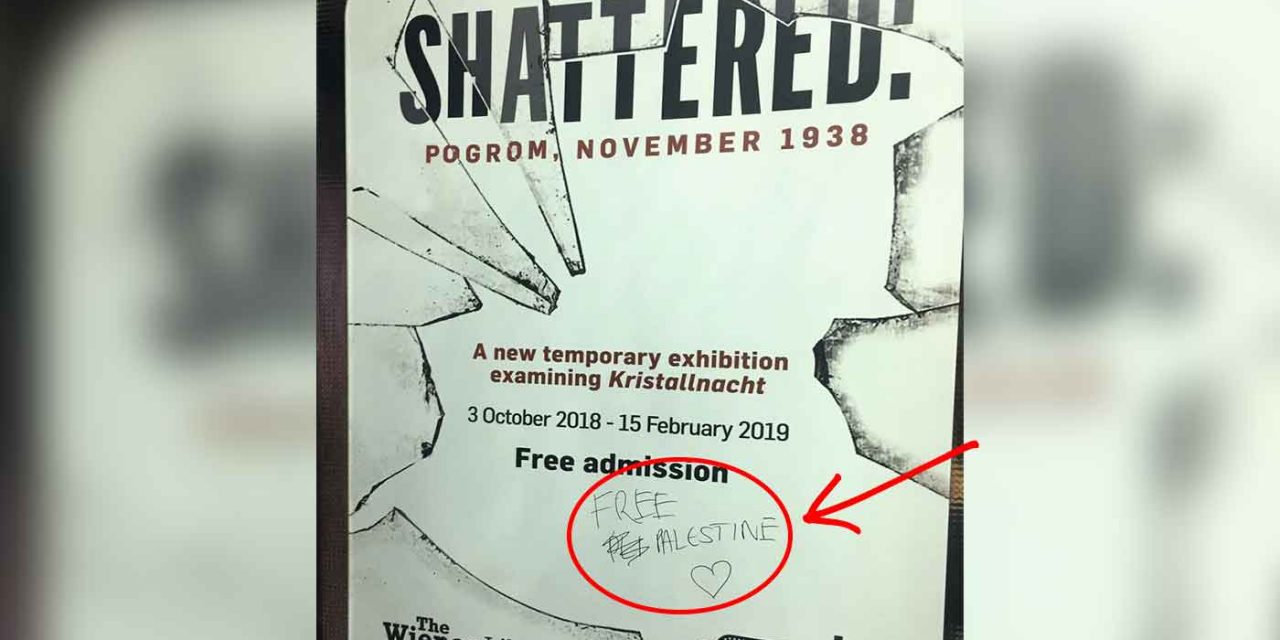 A poster for an exhibition examining Kristallnacht, the event which is said to have sparked the Holocaust, has been defaced in London with anti-Israel graffiti.

The incident took place earlier this week at the tube station in Russel Square.

The Wiener Library tweeted a picture of a poster for its current free exhibition Shattered: Pogrom, November 1938, examining Kristallnacht as the 80th anniversary of the anti-Jewish pogrom approaches.

We were saddened to see our tube poster at Russell Square defaced this morning. We have reported this graffiti & continue to welcome all to learn about Kristallnacht by visiting our exhibition pic.twitter.com/Bs3JmrI3aW

“We were saddened to see our tube poster at Russell Square defaced this morning,” the library’s Twitter account said.

“We have reported this graffiti & continue to welcome all to learn about Kristallnacht by visiting our exhibition.”

Both the Community Security Trust (CST) and Transport for London have been notified of the vandalism.

Kristallnacht was a pogrom against Jews throughout Nazi Germany on 9-10 November 1938 and is seen as the main event foreshadowing the Holocaust.

During that evening, Jewish homes, hospitals, and schools were ransacked, as the attackers demolished buildings with sledgehammers. The rioters destroyed 267 synagogues throughout Germany, Austria, and the Sudetenland, and over 7,000 Jewish businesses were either destroyed or damaged.

The word Kristallnacht means “Crystal Night” in German and is often referred to as the Night of Broken Glass because of all the glass that littered the streets on the morning after.

Nearly 100 Jews were murdered during the attacks. Additionally, 30,000 Jewish men were arrested and incarcerated in concentration camps.

The attacks on these Jewish businesses, homes and places of worship came after a campaign by the Nazis to demonise the Jews and to promote boycotts against them. Interestingly, most pro-Palestinian activists support the Boycott, Divestment and Sanctions (BDS) Movement which calls for the boycotting of Israeli products.