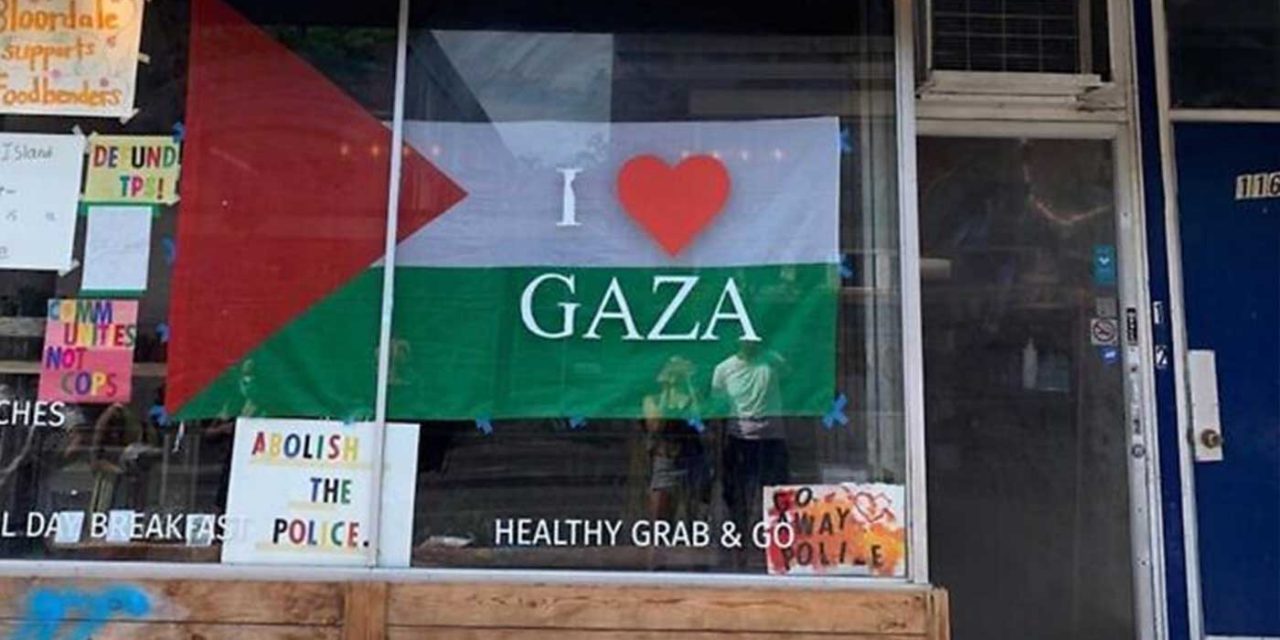 A Toronto health food restaurant, Foodbenders, has come under fire for using the hashtag “#zionistsnotwelcome” in social media posts, losing business deals in the process.

“Open now – 8pm for non-racist shoppers,” one Instagram post read, with that hashtag and others, including “#freepalestine.”

Foodbenders social media posts have said “police brutality is an Israeli export” and “Zionists are Nazis,” and included hashtags such as #fromtherivertothesea and #intifada.

“By stating that Zionists are not welcome to its store, this business is basically stating that Jewish people are not welcome,” Rabbi Meyer May, the center’s executive director, said in a statement. “This is clear anti-Semitism, extremely discriminatory and unacceptable.”

Why are these comments anti-Semitic? Well, the majority of the Jewish community are Zionists, so to call them “Nazis”, when Jews were the biggest victims of the Nazis is pure anti-Semitism. Not to mention blaming Israelis (and Jews) for police brutality is also anti-Semitic. The slogan, “from the river to the sea” is used by Palestinians to depict Israel (the world’s only Jewish state) being destroyed and wiped off the map. And the Palestinian intifadas, which took place in the late 1980s through the early 90s and again in the early 2000s, were a series of violent Palestinian protests that involved terror attacks on Israel.

TORONTO-Restaurant tells customers-"Zionists Not Welcome." They might as well write: No Jews Allowed because Zionism is a big part of Jewish identity for many, if not most Jews. If they dont take this down, people should boycott this place. @StandWithUs https://t.co/Xi2I15rhr6

After repeated anti-Semitic posts, major companies are cutting ties with the business.

This week, Uber Canada, Ritual and DoorDash terminated their delivery agreements with the restaurant and caterer. The Ambrosia Natural Foods chain announced that it would no longer carry Foodbender products in its locations.

On its Instagram page, Foodbenders said that @Uber has terminated its agreement with the store.

There is no place for antisemitism in our communities. pic.twitter.com/oYUFNPNObE

The anti-Israel brigade have not rejected the restaurants anti-Semitism. Instead, they appear to support the anti-Semitic stance of the restaurant. Some 200 pro-Palestinian demonstrators held a “Day of Rage” event in front of the store. The protesters accused “Zionists” of brutality and genocide and called for companies to divest from Israel, the Toronto Sun reported.

It is good to see these companies take a strong stand against racism but it is sad that those who hate Israel are blinded by their own anti-Semitic views.

This is another example that Anti-Semitism never wins.