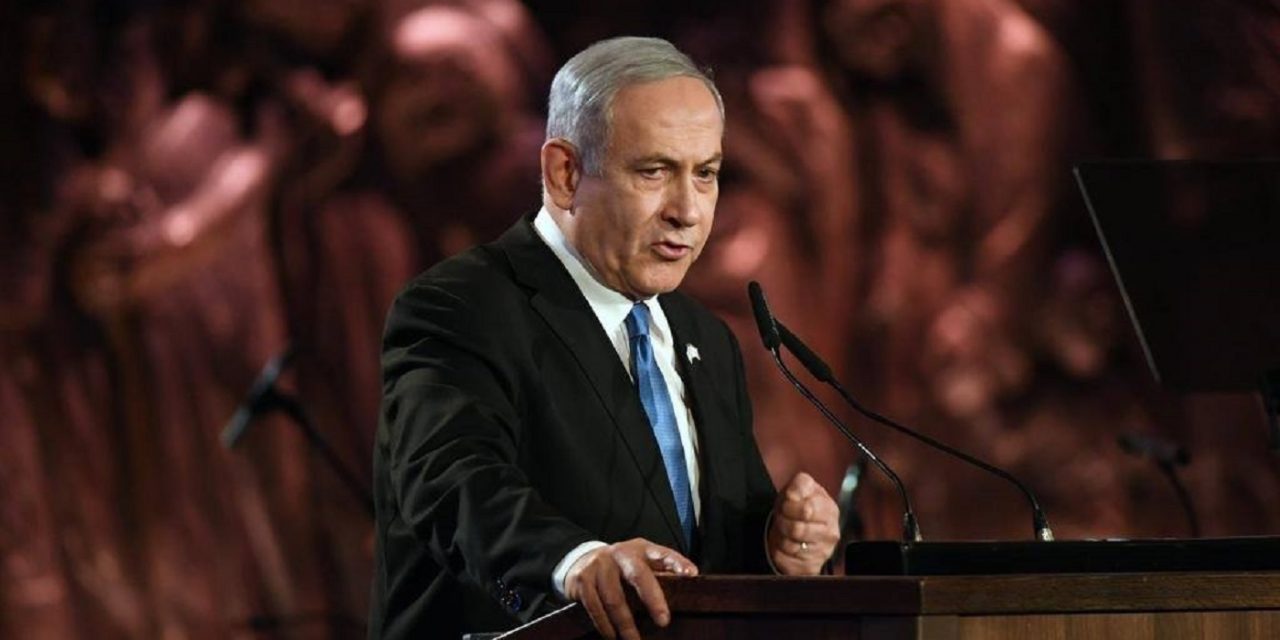 He quoted Scripture, gave examples of how the Jewish people now have a shield that is Israel and how they rose from the darkest days in history to be where they are today.

“Today, we have a land – our ancient homeland which we brought back to life,to which we ingathered the exiles of our people, and in which we built an advanced and powerful state.

“And today, we have a shield. And what a shield it is.”

THIS is the message that world leaders needed to hear!Prime Minister Netanyahu, speaking to around 40 world leaders and dignitaries, including President Putin, President Macron, King Felipe of Spain, Vice President Pence and our own Prince Charles, gave this powerful speech!He quoted Scripture, gave examples of how the Jewish people now have a shield that is Israel and how they rose from the darkest days in history to be where they are today.Am Yisrael Chai!#LoveIsrael #PrayforIsrael #DefendIsrael #CUFI #Netanyahu #Jerusalem #Holocaust #Auschwitz

Posted by Christians United for Israel – UK on Thursday, 23 January 2020

The following is Prime Minister Benjamin Netanyahu’s speech at the “World Holocaust Forum 2020 – Remembering the Holocaust, Fighting Antisemitism” at Yad Vashem in Jerusalem:

The Righteous Among the Nations who risked not only their own lives, but the lives of their families to save Jews during the Holocaust.

The trees on this hallowed ground of Yad Vashem are a testament to their remarkable, extraordinary courage.

Your majesties, Your Royal Highnesses, Presidents, Mr. Vice-President, Prime ministers, and the many distinguished guests and dignitaries assembled here.

Your presence in Jerusalem honors the memory of the six million victims of the Holocaust. Israel and the Jewish people thank you.

Seventy-five years ago, our people – the Jewish People – emerged from the largest killing field in the history of humanity. The survivors do not forget anything: The helplessness, the endless suffering, the flames and the smoke, the bereavement and the loss. But they also remember, with deep gratitude, the day of liberation, the entry of the Red Army into Auschwitz, the immense sacrifice of the allies, soldiers and peoples alike.

I come here, with President Rivlin and President Putin, from a moving ceremony, the dedication of the monument in memory of the victims of the siege of Leningrad. This is one example of the inconceivable price of the victory over the Nazis.

But especially today, it must be said: For the six million of our people, including 1.5 million children, the gates of hell were broken into too late. Too late.

And therefore, at the foundation of the revival of the State of Israel is one main imperative: There will never be a second Holocaust. As the Prime Minister of Israel, this is my supreme obligation.

Israel is eternally grateful to the immense sacrifice that was made by the allies, by the peoples and the soldiers, to defeat the Nazis and save our common civilization. Without that sacrifice, there would be no survivors today.

Yet we also remember that some 80 years ago, when the Jewish people faced annihilation, the world largely turned its back on us, leaving us to the most bitter of fates.

For many, Auschwitz is the ultimate symbol of evil. It is certainly that. The tattooed arms of those who passed under its infamous gates, the piles of shoes and eyeglasses seized from the dispossessed in their final moments, the gas chambers and crematoria that turned millions of people into ash, all these bear witness to the horrific depths to which humanity can sink.

But for the Jewish people, Auschwitz is more than the ultimate symbol of evil.

It is also the ultimate symbol of Jewish powerlessness. It is the culmination of what can happen when our people have no voice, no land, no shield.

Today, we have a voice, we have a land and we have a shield. Today, our voice is heard in the White House and in the Kremlin, in the halls of the United Nations and the American Congress, in London, Paris and Berlin, and in countless capitals around the world, many of them represented here by you.

Today, we have a land – our ancient homeland which we brought back to life,to which we ingathered the exiles of our people, and in which we built an advanced and powerful state.

And today, we have a shield. And what a shield it is. Time after time, the strength of our arms, the courage of our soldiers and the spirit of our people have prevailed against those who sought to destroy us. Our hand is extended in peace to all our neighbors, and a growing number of them are seizing it to build with Israel bridges of hope and reconciliation.

The Jewish people have learned the lessons of the Holocaust: to take, always to take seriously the threats of those who seek our destruction; to confront threats when they are small; and above all, even though we deeply, deeply appreciate the great support of our friends, to always have the power to defend ourselves by ourselves. We have learned that Israel must always remain the master of its fate.

There are some signs of hope – and this extraordinary gathering is one of them. Today, the dangers of racism, hateful ideologies, and antisemitism are better understood. Many recognize a simple truth: that what starts with the hatred of the Jews doesn’t end with the Jews. Represented here today are governments that understand that confronting antisemitism in all its forms protects their societies as well.

And Israel deeply appreciates this. We also appreciate, as many understand, as President Macron said yesterday, that anti-Zionism is merely the latest form of antisemitism. These are all real signs of hope and understanding and cognizance of how to protect our civilization and our world.

And yet, I am concerned. I am concerned that we have yet to see a unified and resolute stance against the most antisemitic regime on the planet – a regime that openly seeks to develop nuclear weapons and annihilate the one and only Jewish state.

Ladies and gentlemen, as the Prime Minister of Israel, I am promise that the words ‘Never again’ will be no empty slogan but an eternal call to action. With this call to action, we will continue our marvelous journey of the revival of our people that emerged from the valley of dry bones. From bones [atzamot] to independence [atzmaut], and from independence to strength [otzma], from Auschwitz to Jerusalem, from darkness – to light. In the words of the prophet Isaiah, ‘The people that walked in darkness have seen a great light.’”