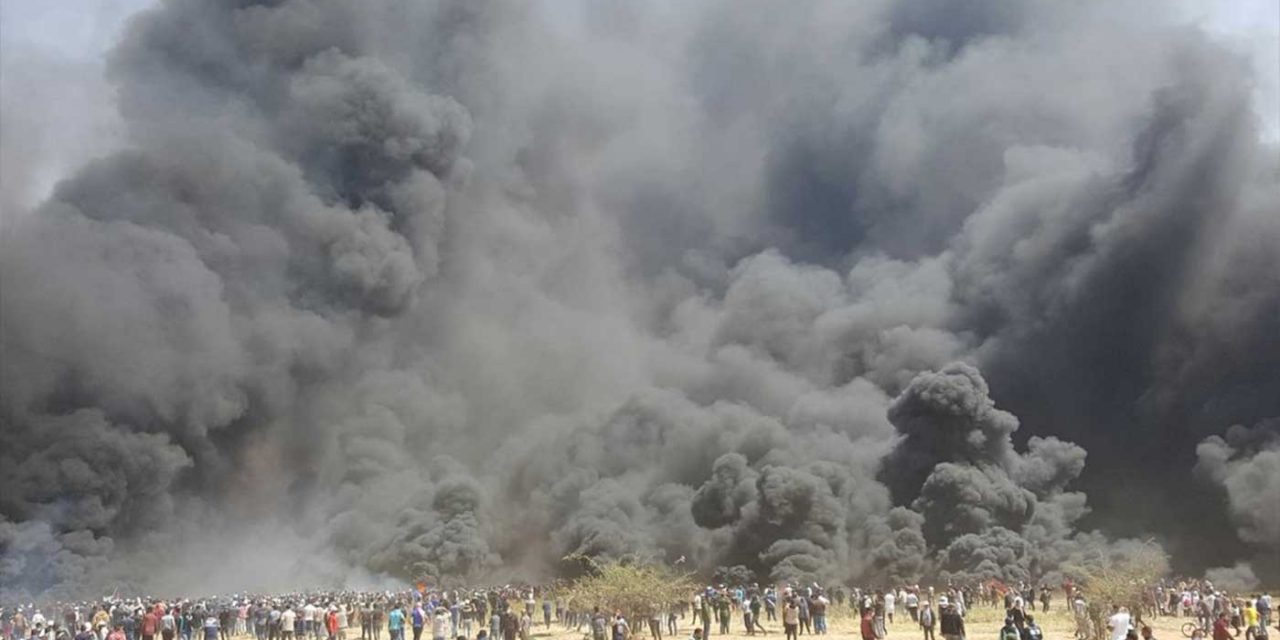 For the second Friday in a row, tens-of-thousands of Palestinians gathered along the Gaza border to take part in violent riots against Israel as part of the Hamas-led “March of Return” protests.

The rioters set thousands of tyres alight, creating thick clouds of smoke that billowed into the air. Some of the protesters tried to attacked IDF troops, throwing firebombs and rocks at the Israeli soldiers who thwarted multiple efforts to breach the border fence.

Wow! This is #Gaza border with #Israel now! [picture: @galberger]

Ask yourself this: why are the Palestinians burning tires? To use the smoke to blind the IDF and make it more difficult for them to respond, as Hamas tries to infiltrate #Israel's border.#GreatReturnMarch pic.twitter.com/hszEF6jeYE

Hamas said three Gazans were killed by Israeli fire as of 5 pm (Israel time). The IDF said it thwarted multiple efforts to breach the border fence — and that it used live fire to do so in some instances — as well as attempts by terrorists to use explosives against Israeli troops under the cover of the thick smoke created by fires.

It is unclear at this time how the three Gazans were killed or if they are affiliated with any terrorist organisation, but most of the Palestinians killed last Friday (16 out of 19) were terrorists, most of whom were killed in gun fights with Israeli soldiers or whilst carrying out terrorist attacks on the border fence.

For the second week straight, Hamas is inciting riots along the Gaza-Israel border in attempt to achieve its goal of harming Israeli civilians regardless of what happens to its own people. pic.twitter.com/HJ5G2vGGr7

Israel’s Foreign Ministry put out a series of tweets to help journalists reporting on the events of the Gaza-Israel border. Here is what they said:

These few points are pivotal elements of the story. It’s not possible to understand the events without this context.

Dear foreign journalist, editor, commentator, diplomat, blogger,
If you are planning on covering and/or addressing events at the Gaza-Israel fence on Friday April 6, we urge you to take the time to read the following. pic.twitter.com/iDoMzxfFTR