Theresa May: “We proudly support Israel as the homeland for the Jewish people” 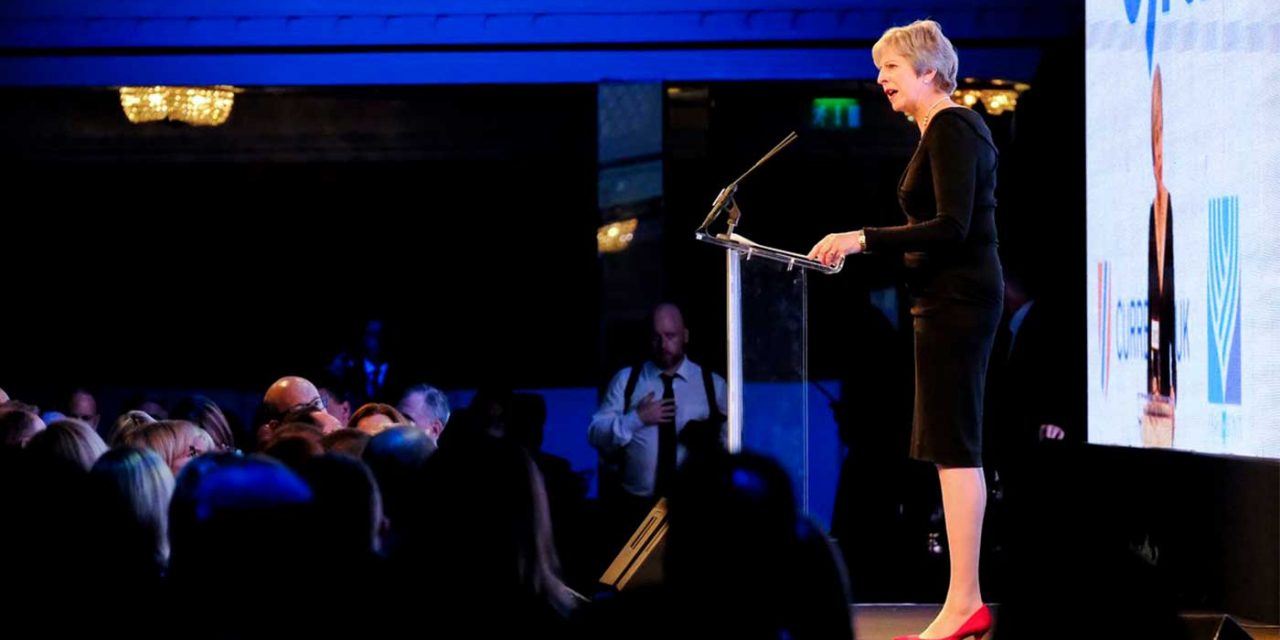 Prime Minister Theresa May has given a strong speech in support of Israel and the Jewish people at the UJIA dinner this past weekend. In her speech, May addressed anti-Semitism, gave support for Israel and spoke of how Jews should feel proud to be “Jewish, British and Zionist”.

Below are excerpts from Prime Minister May’s speech at the UJIA dinner on Monday 17 September 2018.

I stand with Israel as the homeland of the Jewish people. And I stand with the entire Jewish community in Britain.

In the aftermath of the Charlie Hebdo and Kosher shop attacks in Paris I came to a Board of Deputies meeting and joined you in defiance of that horror to say “Je suis Juif.”

And in the face of any kind of hatred against the Jewish people – in any form and anywhere, whether overseas or right here in our own country – I say with that same defiance: “Je suis Juif.”

I know some in our Jewish community say they are fearful of the future. I saw that poll on the front page of the Jewish Chronicle and it sickens me that anyone should feel like that in our country. I do not underestimate the threat posed by those who promote antisemitism, or hatred in any form. Nor the pernicious nature of what those people say and what they stand for.

But I do not believe those voices speak for the vast, overwhelming majority of people in our country.

I do not believe they speak for the liberal, tolerant democracy where we – together – have made our home.

And most importantly, I do not believe that those voices will ever win.

For the sake of our children and grandchildren, they cannot win.

And – together – we will not let them win.

Together, we will stand up for the values we share.

Together, we will defeat the scourge of antisemitism and hatred in all its forms.

And together, we will proudly support Israel as the homeland for the Jewish people.

If we are to stand up for the values that we share – then one of the things we need to do is give young Jewish people the confidence to be proud of their identity – as British, Jewish and Zionist too.

There is no contradiction between these identities – and we must never let anyone try to suggest that there should be.

Indeed one of the most sickening aspects of the antisemitism that tries, abhorrently, to suggest Israel is a racist endeavour – is that those voices seek to separate the Jewish diaspora in our country from their connection with Israel.

We must never let that happen.

Earlier this year, we saw the wonderful visit of His Royal Highness the Duke of Cambridge, the first official Royal visit in Israel’s 70 year history… The Duke’s visit was a celebration of our contemporary partnership with Israel.

We deeply value our connections with Israeli civil society as part of the fabric that binds two democracies together.

And it was great to see another example of the strong bonds which extend beyond the Jewish communities in our two countries – with the Tel Aviv in London Festival last year, showcasing the rich culture of Tel Aviv and its citizens of all religious and ethnic backgrounds. And we look forward to plans for a London in Tel Aviv Festival to showcase London’s cultural diversity to all Israelis.

The last year has also seen us mark the centenary of the Balfour Declaration.

I will never forget standing with Prime Minister Netanyahu to view the original version of that historic letter.

It was very special moment and it encapsulates for me how I feel about Israel.

For I am not just proud to support Israel; I am proud of our role in the creation of Israel.

Britain’s relationship with Israel after Brexit:

I want to build the strongest and deepest possible relationship between our two countries.

Indeed, as the United Kingdom forges a bold new future outside the European Union, we will be seeking free trade deals with our partners around the world. And as a great start-up nation, an engine of enterprise, a world leader in technology, and a great friend of Britain, I want to see an ambitious free trade deal between our countries.

The UK is already Israel’s second largest trading partner and its number one destination for investment in Europe with more than 340 Israeli companies already operating here.

While our bilateral trade is already worth over $9 billion – up by more than a quarter on last year alone.

And as I have said to Prime Minister Netanyahu I want to build on this – deepening our links in particular in sectors like agriculture, health, science, technology and innovation.

The UK’s commitment to Israel’s security:

But my support for Israel goes beyond economics. You can also count on my commitment to Israel’s security.

I understand Israel’s vulnerability because I have been there and seen it for myself. Indeed, it was during my last visit in 2014 that the bodies of the murdered teenagers Naftali Frenkel, Gilad Shaer and Eyal Yifrah were discovered.

So I am clear that we will always support Israel’s right to defend itself.

And in a world where Britain and Israel increasingly face the same shared challenges and threats, I am just as clear that our security services will continue to deepen their already excellent co-operation to keep all our people safe.

The UK will always stand with Israel at the UN (but not always):

You can also count on me to defend Israel’s values – because Israel is a country like ours that believes in liberty, democracy and the rule of law.

But none of this means, of course, that we don’t also have some disagreements with the government of Israel.

Like everyone here tonight, I want to see progress towards a lasting peace – a peace that must be based on a two-state solution with a safe and secure Israel alongside a viable and sovereign Palestinian State.

There will need to be courage and vision from each side if we are to have a realistic chance of achieving this goal – including an end to the building of new settlements and an end to Palestinian incitement too.

The UK has – and will – also stand by Israel whenever it is treated unfairly at the United Nations – as we have shown at the Human Rights Council.

And as we work together towards what was Balfour’s vision of a peaceful co-existence – we must be equally clear that there can never be any excuses for boycotts, divestment or sanctions: they are unacceptable and this government will have no truck with those who subscribe to them.

Under my leadership the UK will always be a real and trusted partner for Israel, supporting Israel’s security and prosperity, not just through our words but also through our actions.

So too, will I act to stand with our Jewish community by rooting out the scourge of antisemitism here in our own country – just as I will stand with every community in Britain to fight racial and religious hatred in any form.

Let me be clear: you cannot claim to be tackling racism, if you are not tackling antisemitism.

And that mission begins by being clear about what antisemitism is.

That is why the government I lead was the first in the world to adopt the definition of the International Holocaust Remembrance Alliance.

Because of this definition, no-one can plead ignorance or hide behind any kind of excuse.

Let me say it very clearly.

There are no excuses for any kind of hatred towards the Jewish people.

Just as there are no excuses for hatred towards any community of any race or religion.

No excuses, means no excuses.

And we will not stop at calling out those who spread this hatred, whether against the Jewish community or any other racial or religious community in our country.

We will record it and punish those responsible for it.

Nothing excuses antisemitism – not comedy, not satire, not even irony.

Antisemitism is just hatred. And it is just wrong.

My government will also continue to back Gerald Ronson and the brave volunteers from the Community Security Trust who are out there tonight, working with the police, to keep us safe at this dinner. And to keep people across the Jewish community safe every day and every night.

I am proud that this government has given £13 million each year to support the work of the CST.

And I will continue to ensure we do whatever is necessary to keep our Jewish Community in Britain safe.

But ultimately if we are to defeat the scourge of antisemitism and all forms of hatred in our country, we need to go further than calling out and acting against the voices of hatred.

We need to learn the lessons of the past and create an environment that builds empathy for others and prevents hatred from happening in the first place.

That is one reason why it is absolutely right that there will be a National Holocaust Memorial next to our Parliament in Victoria Tower Gardens.

And why it is right that this Memorial will have an accompanying education centre – which working in partnership with organisations across the whole country – will lead a national effort to fight hatred and prejudice in all its forms.