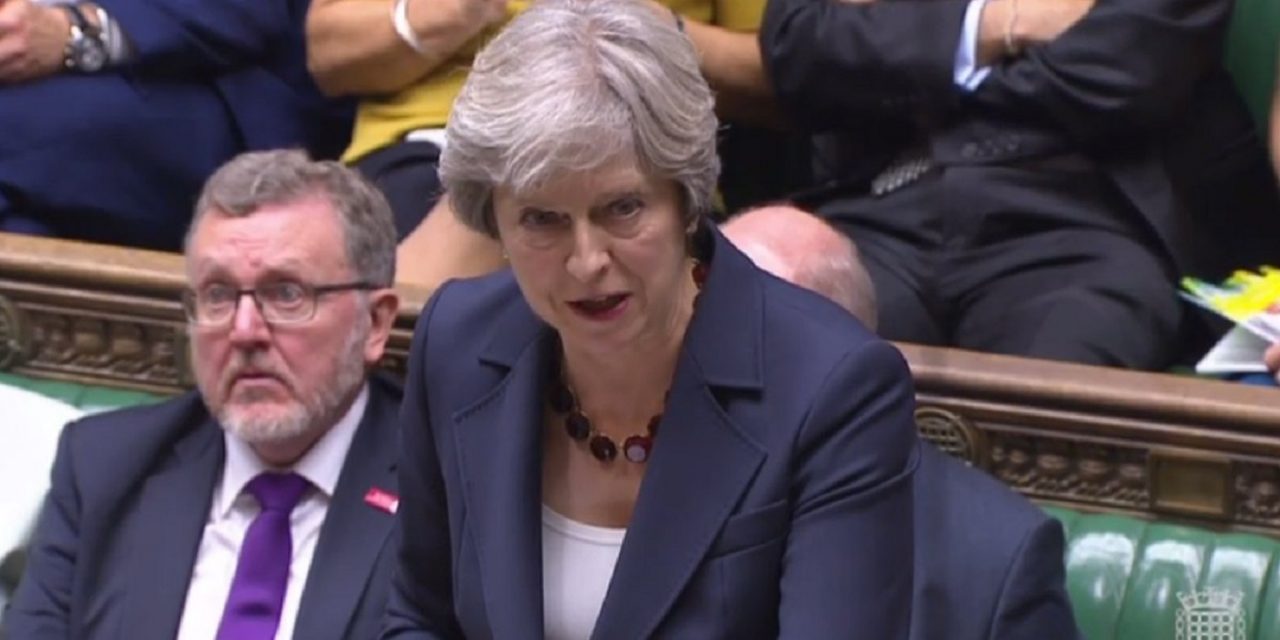 Prime Minister Theresa May said Wednesday that Britain will celebrate with pride the centenary of the Balfour Declaration and its role in the creation of the State of Israel.

Speaking in the House of Commons during Prime Minister’s Questions she said, “We are proud of the role that we played in the creation of the State of Israel, and we will certainly mark the centenary with pride.”

However May added, “We also must be conscious of the sensitivities that some people do have about the Balfour Declaration. We recognise that there is more work to be done.”

Reinforcing her support for a negotiated two-state solution, May told the House that it is “important that we all recommit to ensuring that we can provide security, stability and justice for both Israelis and Palestinians through such a lasting peace.”

May’s words were remarkably similar to those made in a speech at the UN Security Council this week in which Jonathan Allen, the UK’s Deputy Permanent Representative to the UN, said the following:

“From the outset, I would like to make clear, as we approach the centenary of the Balfour Declaration next month, that the UK understands and respects the sensitivities many have about the Declaration and the events that have taken place in the region since 1917.”

Allen went on to say that there is “unfinished business”:

“The UK is proud to have played a role in helping to make a Jewish homeland a reality. And we continue to support the principle of such a homeland and the modern state of Israel.,” said Allen.

“Just as we fully support the modern state of Israel as a Jewish homeland, we also fully support the objective of a viable and sovereign Palestinian state. The occupation is a continued impediment to securing the political rights of the non-Jewish communities in Palestine. And let us remember, there are two halves of Balfour, the second half of which has not been fulfilled. There is therefore unfinished business”

The second half of the Balfour Declaration, which Allen is presumably referring, is highlighted below:

“His Majesty’s Government view with favour the establishment in Palestine of a national home for the Jewish people, and will use their best endeavours to facilitate the achievement of this object, it being clearly understood that nothing shall be done which may prejudice the civil and religious rights of existing non-Jewish communities in Palestine or the rights and political status enjoyed by Jews in any other country”

Melanie Phillips wrote this week, “[Allen] seemed to be suggesting that the establishment of a Palestinian state was the part of the Declaration that had not been fulfilled. But that is totally untrue. The words of the Declaration have been fulfilled to the letter. The “civil and religious rights of existing non-Jewish communities in Palestine” have been scrupulously upheld. Israeli Arabs have full democratic and other civil rights; all religious communities have freedom of worship in Israel – the only country in the Middle East which guarantees this right to all faiths.”

Phillips continued, “The rights of existing non-Jewish communities in Palestine that the Declaration left out were political rights. That omission was deliberate, because it was to be only the Jews who were to have the legal right to establish a homeland in and be settled throughout Palestine – the modern-day Israel, West Bank and Gaza – because the Jews were the only people for whom that land had ever been their national home.”

“In other words, there was no unfinished business in the Balfour Declaration. It included no commitment to establish a state of Palestine and it is an outright falsehood to suggest that it did,” she said.

As Britain prepares to mark the Balfour Centenary next week, the UK Government has an opportunity to reaffirm its commitment to the State of Israel. As Prime Minister Netanyahu joins Theresa May next week in London we hope Britain uncompromisingly celebrate what became one of the most important political acts in modern history.

WATCH: Theresa May "proud of Britain's role in creation of Sta…

MUST WATCH: Today at PMQs, Prime Minister Theresa May reaffirmed that the UK was "proud of the role we played in the creation of the State of Israel" and that we will "certainly mark the centenary with pride", in response to a question from Conservative MP Robert Jenrick.

Posted by Christians United for Israel – UK on Wednesday, 25 October 2017