The BDS Movement is not “Happy” with Pharrell Williams

Pharrell Williams this week came under attack from the BDS movement in South Africa.  Hundreds of pro-Palestinian demonstrators on Monday staged a protest against the Grammy-winning American musician outside the venue he was performing at in Cape Town, South Africa.

The South African branch of the BDS movement was flexing its muscles before the event, claiming it would be “the largest protest any artist would have faced since the end of apartheid”.  They estimated 40,000 BDS supporters would campaign against the artist.

However, when Pharrell’s concert at Cape Town’s Grand West Casino went ahead, they couldn’t even reach one of their predicted forty thousand, with only several hundred people turning up.

The protesters chanted, “Down Pharrell Williams Down”, “Free Palestine” and “Israel is apartheid”. 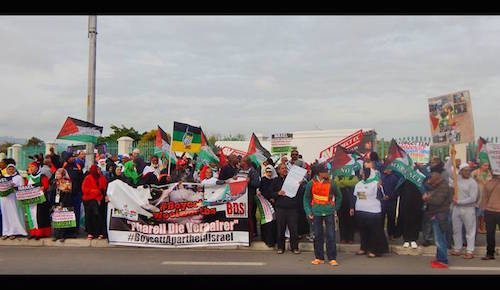 Pharrell Williams is best known for his 2014 global hit “Happy”, of which the official music video has over 720 million views on YouTube.

You may be wondering why the BDS movement is protesting against him. Earlier this year, Pharrell became Woolworths’ new style director in what Woolworths’ described as “a ground-breaking collaboration across a series of sustainability-focused projects”.

Woolworths’ says less than 0.1% of its food products are sourced from Israel, and the imports comply fully with South African government guidelines.

As usual the BDS movement is expending vast amounts of energy to bully and demonise an artist and the company he is contracted with just because they disagree with 0.1% of the company’s activities.  Not to mention the fact that the pro

The fact that both Pharrell and Woolworths have not bowed to the pressure of the BDS movement has made us, at least, very “happy”.