The BBC’s coverage of yesterday’s Jerusalem terror attack, in which a lorry was deliberately ploughed into Israeli soldiers, has sparked controversy after a headline emphasised the shooting of the terrorist and downplayed the attack itself.

The headline in question described the terrorist as a “Driver of a lorry”, writing that he was shot after “allegedly ramming pedestrians”. 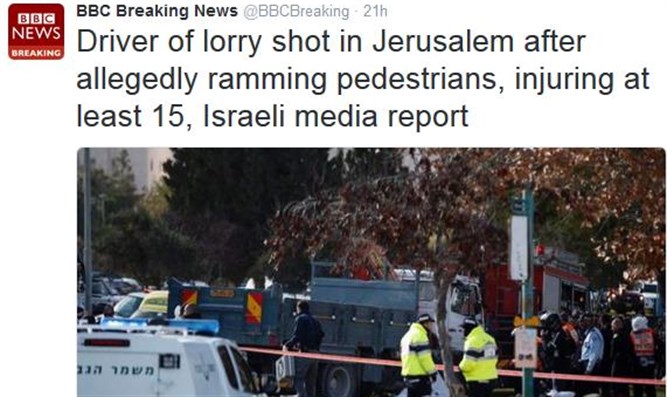 Four Israelis were killed in the purposeful attack in which a truck drove onto a promenade filled with Israeli soldiers, reversed slightly and ran them over again.

While the BBC headline evolved in the hours after the attack, the outlet repeatedly avoided describing the incident as an act of Arab or Islamic terror, the Honest Reporting media watchdog said.

“The BBC has a habit of attributing terror attacks to inanimate objects or vehicles. And so it was the case with an appalling truck ramming terror attack that took place in the Armon Hanatziv neighbourhood of Jerusalem that has, so far, claimed the lives of four Israelis and injured many more.”

In terror attacks in Europe and elsewhere, the BBC would usually interview family members of the victims. But yesterday, only hours after the attack, the BBC were quick to publish a sympathetic interview with the uncle of the terrorist.

In doing so, the BBC effectively made the family of the terrorist murderer into the victims of the story. This is an insult to the real victims – four innocent Israelis, whose stories will probably never be heard in the international media.

Further to this, the uncle didn’t express his condemnation of the attack – or even an attempted reasoning for his terrorist nephew’s actions – instead he explained how Israeli forces had allegedly raided the village and made arrests. 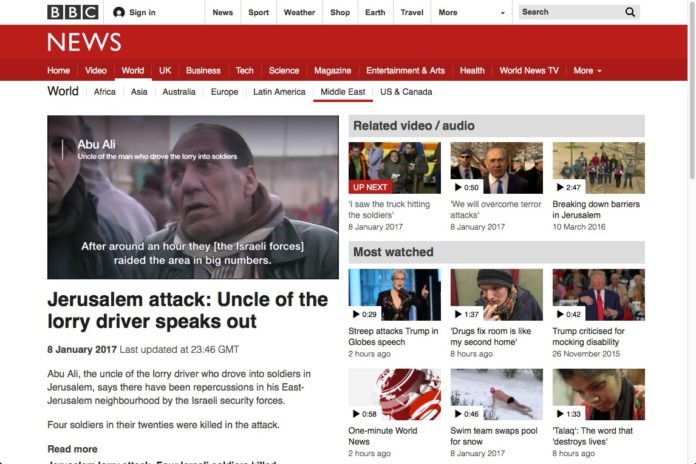