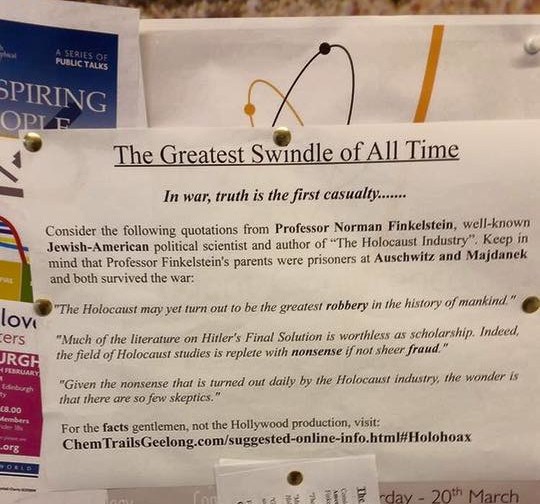 (Breitbart) A second poster claiming the Holocaust was masterminded by the Jews for financial gain has been found on Glasgow university campus, just days after being seen at Edinburgh University. The police are investigating.

The poster found at Glasgow is identical to that found at Edinburgh, quoting renowned Israel hater Norman Finkelstein who called the Holocaust “the greatest robbery in the history of mankind,” and “nonsense if not sheer fraud”. It also cites a link to a Holocaust denial site, inviting “gentlemen” to explore it.

It was found on the Glasgow campus was found by student Louis Faber, who posted a photo of it to Facebook and called on universities to take the issue of anti-Semitism seriously,

Urging fellow students to report the posters to their university administrators and the police if they found them on their campuses, he said he was “absolutely disgusted to find these flyers attached to Glasgow University buildings as I walked to my Jewish Student’s Society AGM.”

He added: “This is living proof that Anti-Semitism is more alive than ever on our British University campuses and across the globe. Universities must now take these issues seriously.”

A spokesman for the University has condemned the poster, suggesting that it may not have come from a student but may have been placed by an anti-Semitic group operating in Scotland.

“In common with other universities in Scotland a small number of leaflets containing objectionable comments on the Holocaust were found, and removed, from university premises,” the spokesman told told the Glasgow Guardian.

“The University of Glasgow has a zero tolerance policy on racism, anti-Semitism and the distribution and display of materials that are likely to cause offence.

“Given the public nature of many of our buildings it is possible that someone from outwith the University was responsible for this incident. We will continue to be vigilant and to again emphasise that such literature has no place on our campus”.

A spokeswoman for Police Scotland said: “We can confirm a complaint was made to police regarding the content of leaflets placed on noticeboards around the campus of Glasgow University. Enquires are continuing.”

Glasgow is currently home to the fourth largest Jewish community in the UK, but that community is dwindling thanks, in part, to an undercurrent of anti-Semitism in the country. Between the censuses of 2001 and 2011, Glasgow lost 20 percent of its Jews, with the population dropping from 4,222 to 3,396 in number.