Sajid Javid: “Israel aligns with all our values” 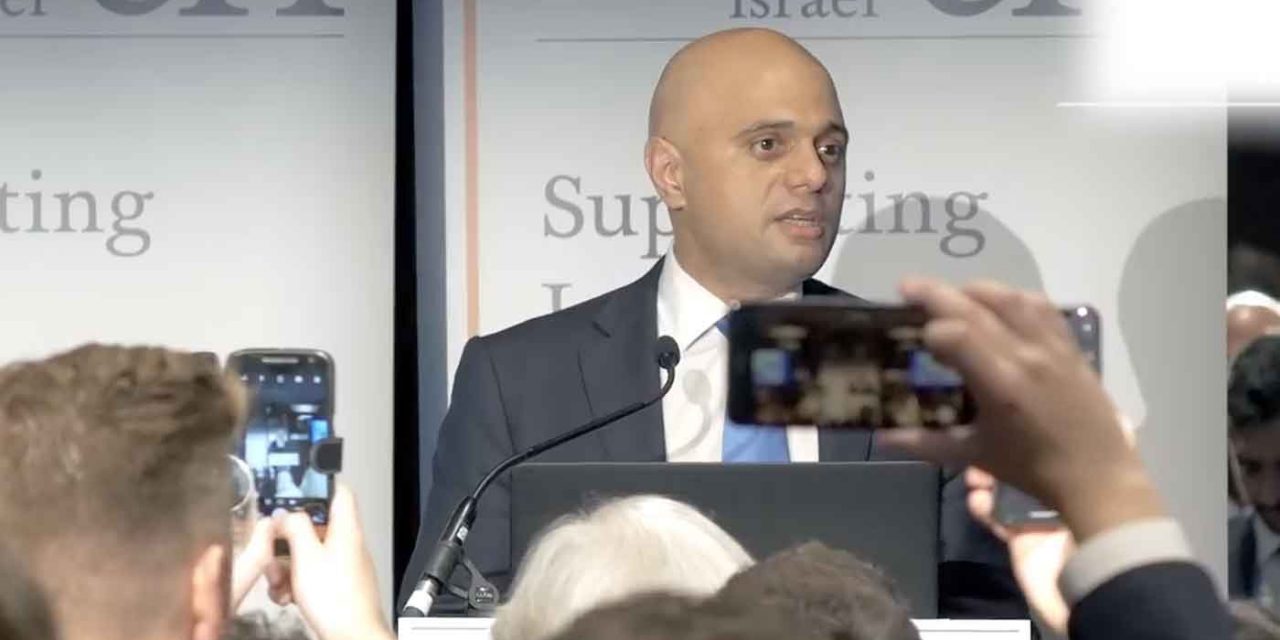 UK Chancellor Sajid Javid has spoken of his “love” for Israel and how Israel aligns with all of Britain’s values.

Speaking at the annual Conservative Friends of Israel (CFI) reception at the Conservative Party Conference, the Chancellor began by lauding the strength of the support displayed, saying it “makes you feel that you are absolutely on the right side” and even joked, “I wish my mum was here – she would have loved it!”.

Mr Javid added: “When I look at Israel… it is a country that aligns with all of our values… it’s great to see how strongly this party supports the values of Israel at every level – whether it’s our Associations, our Councillors, Members of Parliament, the Government, the Cabinet and our Prime Minister”.

According to CFI, the Chancellor expressed his “love” for the country, reflecting on his visit to the Jewish State earlier this year as Home Secretary. He described his visit to Yad Vashem, Israel’s national Holocaust memorial, as “something I will never forget”.

During the trip, the Chancellor became the first Cabinet Minister in 20 years to visit the Western Wall, dismissing advice from officials to bypass the holy site as “a load of rubbish”. He underlined: “It shouldn’t have taken two decades, but I know that many more Conservative Cabinet Ministers will follow on from that”.

Mr Javid condemned rising levels of anti-Semitism in the UK, stating that “everyone in this room has a duty to stop it”.

He added: “Anyone with a sense of history knows full well why the Jewish community feels uneasy now, and nowadays we don’t have to look to the past to learn, sadly you just have to look around you”. The Chancellor told attendees that since he proscribed Hezbollah as a terrorist organisation in February this year, anyone flying Hezbollah flags in the UK “will go to prison”.

Also speaking at the event was Israel’s Ambassador to the UK, Mark Regev who thanked Mr Javid for his actions as Home Secretary in proscribing the terror group Hezbollah.

The Israeli Ambassador said: “You can be proud… that under this Conservative Government, the Israel-UK partnership is stronger than ever before. Our trade is growing beyond the £8.6 billion we had last year, we have just signed a trade agreement so that trade will continue to grow in the years to come, that’s prosperity and that’s jobs”.

He referred to Israeli Prime Minister Netanyahu’s recent visit to the UK, which highlighted “the strength of our countries’ partnership, a partnership that is built not only on common interests, but also on common values”. Ambassador Regev add that he believes this realtionship “will endure for many, many years to come”.

The Chairman of the Conservative Party, James Cleverly MP, also addressed attendees, affirming that he is “passionate to be a Conservative friend of Israel”. He said that the “really well-attended reception… sends a signal to everybody who respects choice and freedom and diversity and the ability to live the life that you want to live without fear of attack or marginalisation”.

In her remarks, Environment Secretary Rt. Hon. Theresa Villiers MP underlined her belief that “the State of Israel is a phenomenal success story, created out of adversity, surrounded by enemies, it is a country that has thrived”. She added that “this country should be proud to be allies of the only true democracy in the Middle East”, before reflecting on one of her last debates as a backbench MP on the subject of Jewish refugees in the Middle East and North Africa, which she described as “an untold story and an unresolved injustice”.

Transport Secretary Rt. Hon. Grant Shapps MP used the opportunity to condemn anti-Semitism in the Labour Party, telling attendees that “in a civilised country, in a civilised world, it must be true to say that the way that Jews are treated in society is the very definition of our civilisation”. He asked: “How can it be, in the 21st century, that there is a major British party that has a problem with anti-Semitism?”

The Conservative Candidate for Mayor of London, Shaun Bailey AM, addressed the reception, speaking how he was learning “to understand the trials and tribulations of the Jewish past… I’ve been to Israel… I’ve been to Yad Vashem… I’ve also been to Poland, to Auschwitz, and learnt so much”.

If elected as London Mayor, Mr Bailey said he would take a “zero-tolerance approach to anti-Semitism”, stating his belief that “there is no difference between anti-Zionism and anti-Semitism”. He reiterated: “This is about squashing out racism in all of its forms”.

The former Australian Prime Minister, Tony Abbott, also spoke at the event telling those gathered that “Israel is the only liberal pluralist democracy in the Middle East”, before asking: “How could anyone not be a friend of Israel?”

Solicitor General Michael Ellis QC MP said that “Israel is a country for whom the rule of law matters”. He said: “I understand, for example, it is a country whose Supreme Court regularly overrules the Government; that’s democracy. It is a country that is a beacon of democracy around the world”.