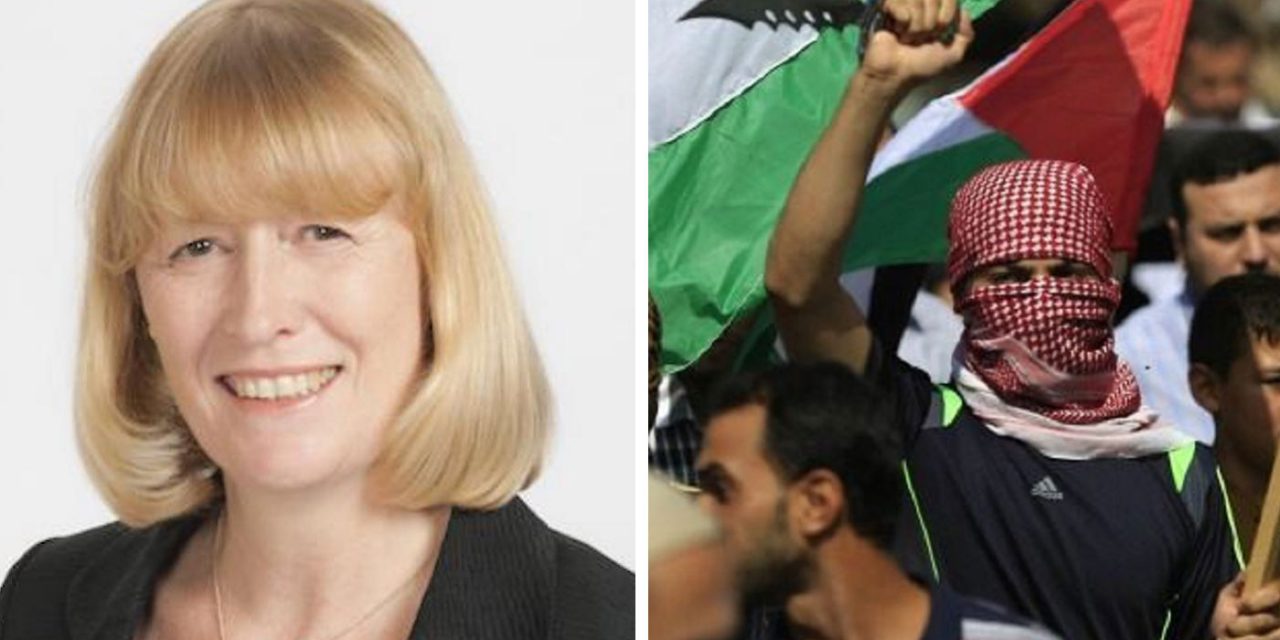 Labour MP Joan Ryan wrote a strong letter calling upon Prime Minister Theresa May to demand the PA “halt all incitement, particularly that surrounding the Temple Mount” in response to Palestinian leadership’s encouragement of Palestinians to escalate riots during the recent Temple Mount conflict.

This letter was sent during the escalation of violence by the Palestinians over the Temple Mount a few weeks ago, but we think it does a great job summing up the incitement that was carried out by the Palestinian leadership leading to riots and even terror attacks against Israelis.

The full letter from Joan Ryan MP is as follows:

I am writing to you to express my deep concern over the current violence in Israel and the West Bank, including the horrific murder of three members of an Israeli family in a stabbing attack in their home at Halamish on Friday.

As you are aware, 10 days ago, a terrorist attack was perpetrated at the Temple Mount in which two policemen tragically lost their lives. In response, Israel has introduced enhanced security measures at all entrances to it (as opposed to simply the one used by non-Muslims, as was previously the case). Sadly, such measures are now commonly used at religious sites throughout the world, apparently without protest by those subject to these checks.

However, both the Waqf authorities, who have responsibility for the Temple Mount, and the Palestinian Authority have objected strongly to the installation of metal detectors.

I am deeply concerned that the language being deployed by both – echoing, as it does in the case of the latter, similarly intemperate language in the past – is inciting violence and fuelling a false narrative that Israel is somehow failing to respect a site which is holy to both Muslims and Jews alike.

In recent statements, the Waqf has, for instance, repeated the incendiary claim that Israel is threatening to change the 50-year-old status quo at the Temple Mount:

“We confirm our total rejection of the electronic gates and all new occupation measures that will lead to a change in the historical and religious status quo in Jerusalem and its holy sites, especially the Al-Aqsa Mosque.”

The Israeli government has underlined in recent days the categorical assurances it has previously given that it has no intention of changing the status quo at the Temple Mount.

While President Abbas initially condemned the terrorist attack on the Temple Mount, the PA and his political party, Fatah, appear to have subsequently given out decidedly and dangerously mixed messages.

I would like to bring your attention to the following examples which have been provided by Palestinian Media Watch.

1. Immediately following the attacks, Abbas’ Fatah party rebroadcast on Facebook [Official Fatah Facebook page, 15 July 2017] a speech the President delivered in October 2014 in which he said:

That speech, broadcast 19 times in three days on official PA TV, marked the beginning of a month of terror attacks in Jerusalem in which 11 Israelis were murdered in car rammings and stabbing attacks.

2. Fatah posted a picture of the Temple Mount terrorists on its Facebook page, describing them as “martyrs”, as well as calling for “rage” against the new Israeli security measures [Official Fatah Facebook page, 14 July 2017].

“What is happening constitutes blatant aggression and an Israeli plan that is targeting the identity, heritage, and faith of the Palestinians in Jerusalem, and their presence in the occupied holy city – something that is only liable to intensify the tensions in Jerusalem in particular and in the region in general, to lead to an explosion of the situation, and to ignite a religious war for whose disastrous consequences the government of Israel will be fully responsible.”

4. Abbas Zaki, a member of Fatah’s Central Committee, stated that the committee had “discussed… the Israeli attacks on the blessed Al-Aqsa Mosque” and was calling for “escalation”. According to the Donia Al-Watan, an independent Palestinian news agency [20 July 2017]:

“He [Zaki] noted that the movement has declared this Friday a day of general mobilization to Jerusalem… He also noted that the [Fatah] Central Committee called on its supporters and members of the organization to turn this Friday into a day of escalation and refusal of all the Israeli steps in the holy city [of Jerusalem].”

Zaki also “called on the Palestinian and Arab masses to participate as widely as possible in the day of rage tomorrow [Friday], in order to support the blessed Al-Aqsa Mosque.” [WAFA, official PA news agency, 20 July 2017]

Unfortunately, as the rebroadcast October 2014 speech shows, President Abbas has himself used similarly incendiary language in the past surrounding the Temple Mount. In September 2015, just before the start of the wave of terror attacks to which Israel has been subject for nearly two years, he stated:

“The Al-Aqsa [Mosque] is ours… and they have no right to defile it with their filthy feet. We will not allow them to, and we will do everything in our power to protect Jerusalem.”

Abbas then also “bless[ed] every drop of blood that has been spilled for Jerusalem,” stating that “every Martyr will reach Paradise, and everyone wounded will be rewarded by Allah.”

As you know, Britain is a major donor to the Palestinian Authority. According to the Memorandum of Understanding signed between the PA and the Department for International Development, among the “Partnership Principles” the PA is supposedly committed to respecting is the principle of non- violence and respect for human rights. Alongside LFI parliamentary colleagues, I have repeatedly raised with DfiD the numerous examples of incitement perpetrated by the PA which appear to breach these principles.

In particular, we are concerned about the fact that Palestinian children are subject to a barrage of antisemitic incitement by the PA. As I identified in March, more than 20 schools in the West Bank and Gaza are named after terrorists – such as Dalal Mughrabi who led the infamous 1978 Coastal Road massacre in which 38 civilians, 13 of them children, were murdered – who have carried out horrendous attacks in Israel, both prior to, and subsequent to, the signing of the Oslo Accords in 1993. Sports tournaments and youth camps are named after terrorists, including some of the perpetrators of the ongoing “knife Intifada”. Programmes on official PA TV aimed at very young children serve up a similarly distasteful diet. Take, for instance, a poem which has been recited by children on a number of occasions in recent years which refers to Jews as “barbaric monkeys”, “wretched pigs” and “filth”.

The intent of this policy – to glorify terrorists and antisemites – and its impact are not hard to discern. Indeed, as research by Palestinian Media Watch has shown, children attending schools named after so-called martyrs are well-aware that they are being encouraged to view them as “models” and, in the words of one, to “follow [their] path”.

I have provided DfID with the names of schools named after terrorists, as well as after Amin Al- Husseini, the Grand Mufti of Jerusalem during the inter-war period. Al-Husseini was a notorious Nazi collaborator who spent the war broadcasting pro-Axis, anti-British, and anti-Jewish propaganda to the Arab world; inciting violence against Jews and the British authorities in the Middle East; and encouraging young Muslims to join the German military, the SS and auxiliary units. I am surprised that DfiD was unable to tell me whether any of the several thousand teachers and other “essential” education public servants it helps pay the salaries of work in schools named after terrorists and Nazi collaborators.

Both myself and my colleague, Ian Austin, have also provided DfID in Parliamentary Questions and letters specific examples of incitement perpetrated by the PA. On many occasions, we have failed to secure the reassurance we sought that these examples have been raised with the PA. Moreover, the letter of the Secretary of State for International Development to Ian and I on 20 April 2017 explained that the issue of incitement in schools had been raised by Rory Stewart in March. However, we do not believe that the apparent assurances provided by the PA match up to the available evidence. I am now asking you to take the following actions:

First, instruct the Foreign Office and Department for International Development to inform the PA that it should immediately halt all incitement, particularly that surrounding the Temple Mount. To underline the seriousness of Britain’s concerns, this message should be delivered by ministers, not officials, to President Abbas and Prime Minister Hamdallah. I support funding the PA and agree with the government that funding teachers, doctors and nurses is a good use of our aid money. But I do not believe that we can simply ignore and be silent on the question of incitement any longer. Therefore, failure to carry out this request should be met with deep and meaningful cuts in British aid to the PA, with the money instead redirected to coexistence projects and health and education projects in Palestine run by trusted NGOs.

Second, in March DfiD carried out its annual review of the PA’s compliance with the MOU. Despite previous requests, DfiD has repeatedly refused to publish these reviews. I would ask those for 2016 and 2017 be immediately published.

Third, last year I wrote to David Cameron recommending the establishment of an independent cross- party review into how British aid spending in Palestine can best support a two-state solution. I would request that you give this request further consideration.

Fourth, Britain has a long and important friendship with Jordan. Given its important role with regards the Waqf and the Temple Mount, I would ask that we use our relationship with the government of Jordan to ask it to do all it can to de-escalate the situation.

Fifth, I would ask that you convey to the Israeli government the sympathies of the British people to all those who have been killed and injured in the ongoing violence. Furthermore, I ask that you make clear our government’s support for the entirely reasonable and measured response of the Israeli authorities in introducing enhanced security measures to protect this important holy site and those who wish to worship at it. Having suffered a series of terrorist attacks ourselves in recent months, I am sure you will be keen to show Britain’s solidarity with those in Israel who are also under attack.

Finally, after recess, both I and a number of my LFI colleagues would appreciate the opportunity to meet with you and discuss these concerns in further detail. Britain’s support for a two-state solution and a peaceful settlement between Israel and the Palestinians has never been a partisan issue, and I hope that we can proceed in that spirit.