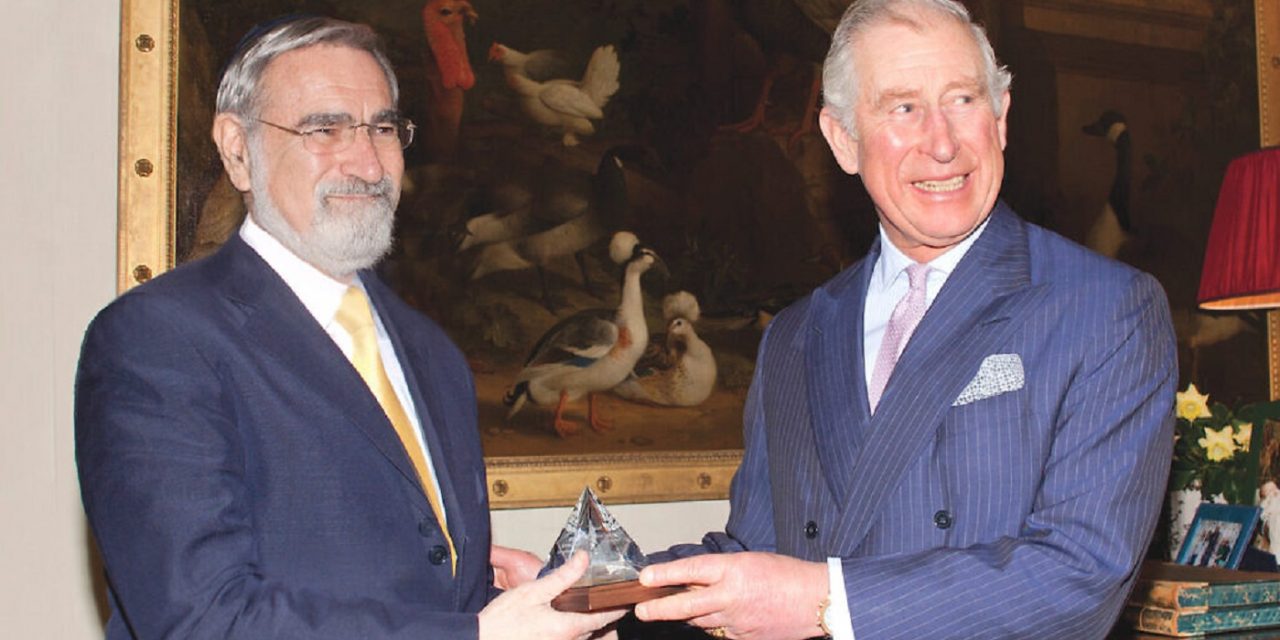 Prince Charles, former Prime Ministers Tony Blair and Gordon Brown and Israeli President Reuven Rivlin were among a series of world leaders who hailed the legacy of the late former Chief Rabbi, Lord Jonathan Sacks, in an online memorial event on Sunday evening.

The tribute – in which Rabbi Sacks was widely described as a “teacher” by global leaders – was held to coincide with the end of the ‘Shloshim’, the 30-day period of mourning since Rabbi Sacks died last month aged 72 after being diagnosed with cancer.

You can read all of the tributes to Rabbi Sacks at the Jewish News, however, below is the video of the full event along with the transcript of the words spoken by Prince Charles.

The Prince of Wales described Rabbi Sacks as an “irreplaceable loss” and “a trusted guide, an inspired teacher and a true and steadfast friend”.

In a heartfelt message, the future king said: “As we commemorate the life of Rabbi Lord Sacks, I just wanted to add my own personal tribute.

“His sudden and unexpected death is an irreplaceable loss to the Jewish community, to this nation and to the world – but most of all to his family, to whom he was utterly devoted.

“Our thoughts and prayers are with them at this saddest of times.

“Through his writings, sermons and broadcasts, Rabbi Sacks touched the lives of countless people with his unfailing wisdom, with his profound sanity and with a moral conviction which, in a confused and confusing world, was all too rare.”

Prince Charles said: “He and I were exact contemporaries, born in the year of the foundation of the State of Israel and, over many years, I had come to value his counsel immensely.

“He was a trusted guide, an inspired teacher and a true and steadfast friend. I shall miss him more than words can say.

“With his incomparable store of learning, and with his innate sense of the power of the story, he defined the moral challenges and the choices our society faces, speaking with conviction across the boundaries of the sacred and the secular, across the generations and across all barriers of culture and religion.

“He taught us how to listen to others, and how to learn from them without compromising the convictions of either party; he taught us to value participation in the common life of the nation; and through it all, he taught us the need to respect the integrity and harmony of God’s Creation.

“In 2013, at the event to mark Rabbi Sacks’s retirement as Chief Rabbi after twenty-two distinguished years, I said – deliberately misquoting Isaiah – that he was a “light unto this nation,” and said I hoped he would keep that light burning for many years to come.

“That was only seven years ago. But, in the years that he was given to us, how brightly that light burned, how many lives were brightened, how many dark places were illuminated. He was, truly, Or laGoyim [“A light unto the Nations”].

“In contemplating this tragic and devastating loss, all we can do is to have faith in the divine providence in which Rabbi Sacks himself placed his trust. As the Psalmist says, our times are in his hands. Though Rabbi Sacks’s time with us seemed all too short, his seventy-two years left the world transformed by his presence. In his sermons, his broadcasts and his books, he spoke with urgency – rich with learning, rooted in humility, charged with passion. His was unmistakably a voice in the tradition of the greatest teachers among the Jewish people.

“We mourn his passing, but we thank God that he was given to us for these seventy-two years, and that, in that time, he renewed our vision of a society where all are valued, where all share a moral bond and a divine purpose. We honour his memory by committing ourselves to that vision.

“When his own revered teacher, Rav Nachum Rabinovitch, passed away earlier this year, Rabbi Sacks paid tribute and said: “Teachers give us more than knowledge. They give us life. Having a great teacher is as close as we get to heaven.”

Those words could rightly be said of Rabbi Sacks. Yehi Zichro Baruch. May his memory be for a blessing.”

Read more tributes to Rabbi Sacks at the Jewish News