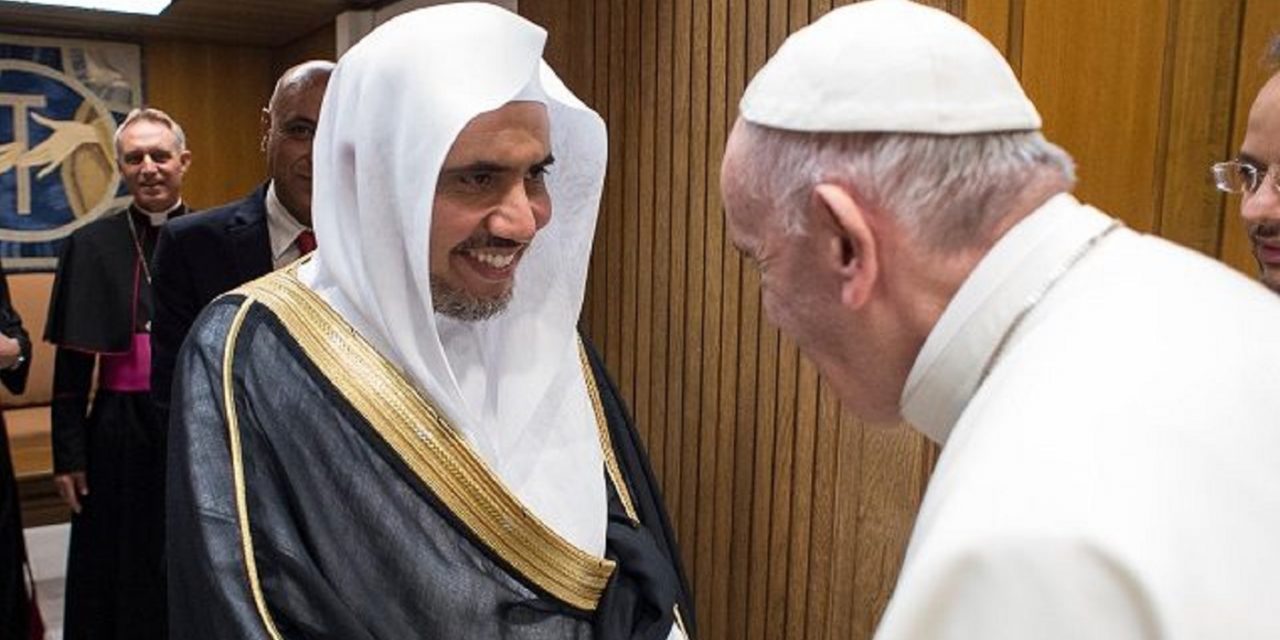 Pope Francis has met with the secretary general of the Muslim World League (MWL) in the Vatican Wednesday, a group that has been accused of ties to Saudi financing of jihadist terrorism and the 9/11 attacks in 2001.

Dr. Muhammad bin Abdul Karim Al-Issa, who served for several years as Saudi minister of justice in Riyadh and is now secretary general of the MWL, expressed the appreciation of the Muslim world for the pope’s “fair positions” regarding “the false claims that link extremism and violence to Islam,” as well as for his insistence that extremism is not distinctive of Islam but is found among followers of all religions.

The Muslim World League is a Saudi Government-funded Islamic non-governmental organization, founded on May 18, 1962 in Mecca for the propagation of Islamic teachings. Despite the group’s official opposition to violence and terrorism and its pursuit of intercultural dialogue, it has been the subject of several ongoing counter-terrorism investigations in the U.S. related to Hamas, al Qaeda and other terrorist groups.

Two months after the 9/11 jihadist attacks on U.S. soil, Newsweek writer Evan Thomas reported that the Muslim World League was one of “two interrelated global charities” directly funded by the Saudi government that were used by Osama bin Laden to finance his operations. The organizations were left off the list of groups sanctioned by the United States “in order to avoid embarrassing the Saudi government,” Thomas wrote.

In 2004, Harper’s Magazine declared that the Muslim World League had been “long known to have funneled money to Al Qaeda” and is financed directly by the Saudi government. “MWL is an evangelical organization that was created to help spread Wahhabism, the Saudi brand of Islamic fundamentalism,” the article stated.

According to the New York Times, an internal, top-secret report from the Treasury Department obtained through the Freedom of Information Act stated that the International Islamic Relief Organization (IIRO), “an offshoot of the Muslim World League,” supported terrorist organizations beginning in the early 1990s “through to at least the first half of 2006.”

The MWL has also come under fire for its alleged anti-Semitism and the Anti-Defamation League claims that the MWL has frequently been a platform for anti-Israeli rhetoric. It has also been accused of using its English-language “Journal” to spread anti-Semitic conspiracy theories.

At their first International Islamic Conference on Dialogue in Mecca in 2008, the MWL invited Yusuf al-Qaradawi to speak. During his speech, he said he would “never sit with Jews on one platform and never hold dialogue with those Jews who have committed injustice against us and support Israel.”

On Tuesday, Al-Issa spoke at an international conference in Rome on “Tolerance in Islam” along with Joseph Levi, the former chief rabbi in Florence, and Bishop Miguel Ángel Ayuso Guixot, secretary of the Pontifical Council for Interreligious Dialogue.

For his audience with the Pope, Al-Issa was accompanied by a delegation of seven people. The Vatican released a series of photographs of the encounter, during which the two men reportedly exchanged views on a number of “issues of common interest” including peace and global harmony, and discussed cooperation on issues of peaceful coexistence and the spread of love.

At the end of the meeting, Pope Francis and Al-Issa exchanged commemorative gifts. Al-Issa offered the Pope a symbolic gift representing Islamic civilization and its interaction with other civilizations, while Francis gave his guest a commemorative pen for the 500th anniversary of the construction of St. Peter’s Basilica and a medal commemorating the Pope’s fifth year in the chair of Peter.