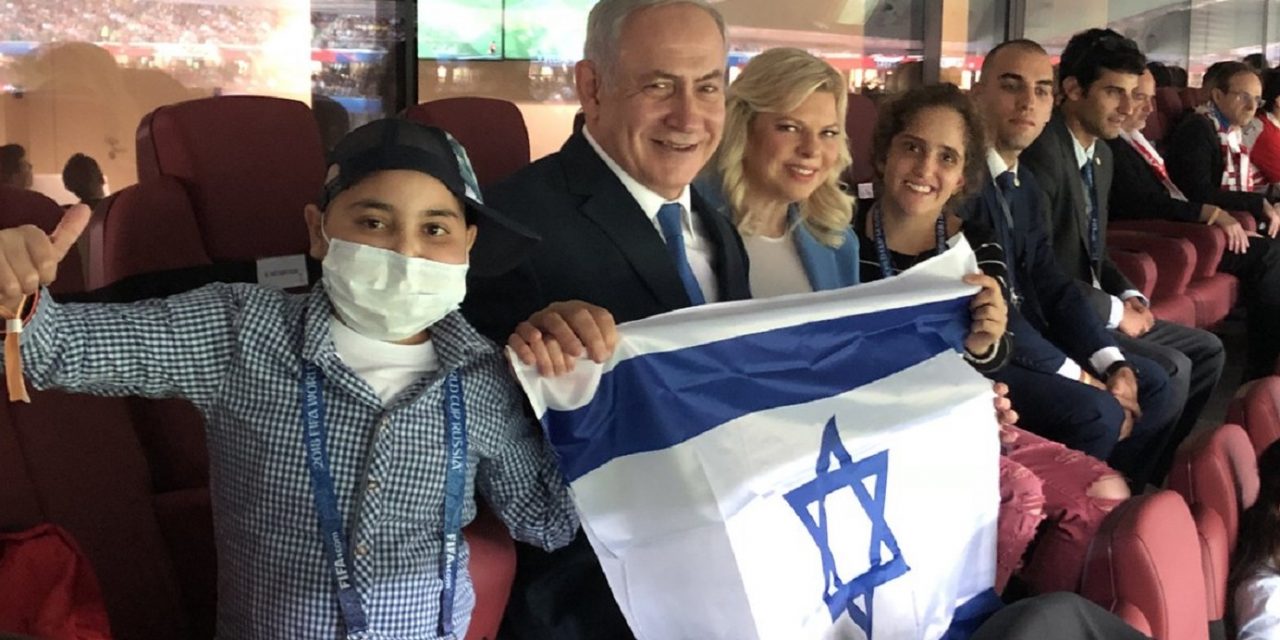 Ahead of the game, Netanyahu tweeted:

“I’m going to Moscow for a very important meeting with the Russian President Putin. President Putin invited us to join him later in the semifinals of the World Cup. We have decided to bring two wonderful children who are fighting cancer: Mika, who my wife has known for nine years, and Alon, whose parents have originated from Russia and is very fond of football.”

The children were Mika Lipsker, 18, from Katzir, and Alon Eizarayev, 13, from Petah Tikva, who was born in Russia  and were accompanied by their parents. In a video posted after the match, PM Netanyahu explains to the Croatian Prime Minister that Alon received a new heart from a Croatian donor (see below).

When Alon was six years old, he received a new heart from a Croatian donor. Alon was overjoyed to watch Croatia win its World Cup semi-final match on Wednesday. My wife Sara and I also brought Mika to watch the match. Sara has been accompanying Mika for the past nine years as Mika receives cancer treatment. We wish Alon and Mika a speedy and full recovery.

Posted by The Prime Minister of Israel on Friday, 13 July 2018

Prime Minister Benjamin Netanyahu and his wife Sara are attending the #WorldCup semi-final match, at the invitation of Russian President Vladimir Putin, along with Mika Lipsker and Alon Eizarayev, who are fighting cancer and whom they invited to the game. pic.twitter.com/r6EHoDFX1i

Prime Minister Netanyahu said:
“I am now leaving for Moscow for a very important meeting with Russian President Vladimir Putin. We will discuss Syria, Iran and Israel’s security needs. I very much appreciate the excellent direct connection, without intermediaries, between myself and the Russian President. It is very important for the national security of the State of Israel.

“After the meeting, my wife and I have been invited to watch the World Cup semi-final match and they told us that we could bring two guests. We decided to bring with us two wonderful children who are bravely fighting cancer: Mika, whom my wife and I have known for nine years, and Alon, whose parents emigrated from Russia and who likes soccer very much. We are very moved that we can realize a dream for them.

“Of course, when they ask me, ‘Prime Minister, who will win?’ I answer you as Prime Minister and Foreign Minister: ‘The better team’. It should be a fascinating game.”

Prime Minister Netanyahu signed a football which has been signed by all the leaders who have visited Russia since the start of the #WorldCup. pic.twitter.com/9h8jvfwNq1

Posted by Christians United for Israel – UK on Wednesday, 11 July 2018