(CUFI-UK) Pictures of Palestinian “martyrs” have been displayed at one of Britain’s leading universities at a vigil held on Tuesday.

Photos provided to CUFI by sources at the University of London’s School of Oriental and African Studies (SOAS), show pictures of terrorists who murdered innocent Israeli civilians plastered around the entrance to the campus.

A vigil in commemoration of “Palestinian martyrs” is held on the steps of the School of Oriental and African Studies, 10 November 2015 (Photo credit: Ruby Marriott/Avrahum Sanger)

The event titled “Vigil for Palestinian Martyrs” was attended by around 150 people and held on the main university steps. The event page on Facebook has since been removed.

According to a student at the university, Jewish students were approached by organisers of the event when taking photos of the display. When questioning why individuals, such as Muhannad Halabi who killed two Israelis and injured two more (including a two year old baby), the response was that he was a human-being that passed away. 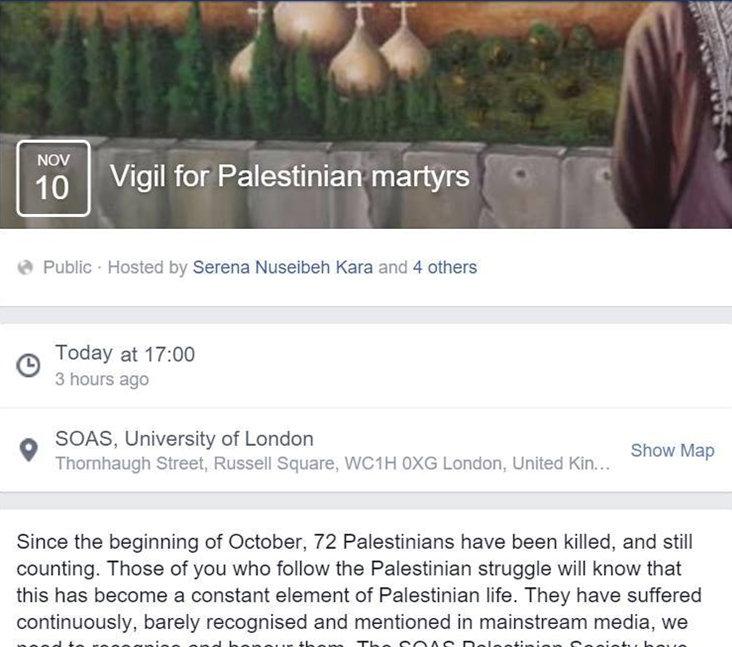 A Facebook page promoting the event has since been removed.

The SOAS Palestine Society, organisers of the commemoration, also claimed that the attacks had been caused by Israeli “occupation”.

Pictures of “Palestinian martyrs” are posted in the entrance of the School of Oriental and African Studies, 10 November 2015 (Photo credit: Ruby Marriott/Avrahum Sanger)

A Jewish student who witnessed the vigil, Ariel Tamman, said “I’m utterly shocked and disgusted that something like this can happen and terrorism can be commemorated in such a manner. A similar event occurred at London School of Economics a few weeks ago and nothing has happened.”

Ruby Marriott, another Jewish student, told CUFI, “When I saw the ‘vigil for Palestinian martyrs’ organised by the Palestine Society at SOAS university standing on the steps to the main campus, holding signs of so called ‘innocent Palestinian martyrs’, I was shocked to see terrorists plastered on the wall and was deeply disturbed to witness this.”

He continued, “The display was a standalone event but it covered the entire entrance with pictures of the ‘martyrs’, such as Muhannad Halabi, on the walls of the university, and was unavoidable by all members of the university.”

A vigil that includes perpetrators of terror attacks against innocent Israelis raises serious concerns over the anti-Israel movement at some UK universities. There has been no known vigil for Israeli victims of terrorist attacks, but instead their murderers are among those being commemorated, even glorified by pro-Palestinian supporters.

This is unacceptable and extremely distressing for Jewish students on campus. CUFI stands with Jewish students who are experiencing an increasing hostility towards Israel.