OPINION: “They shall not pass” – lessons 80 years after East Londoners stood up to facism

The infamous 1936 march by Oswald Mosley’s fascist “Blackshirts” prompted ordinary Londoners to take to the streets to block the anti-Semites and protect the Jewish community. Eighty years on and the recent rise in anti-Semitism is calling upon Britons to form a human wall again.

The dramatic day of riots on 4 October 1936 became known as the Battle of Cable Street. For British Jews, the attempt to stop the British Union of Fascists marching through the streets of Stepney in London’s East End was a watershed moment. It was a collective fightback against months of intimidation and violence in the neighbourhood where Jews had lived for decades in the early 20th Century. But it also took place when fascism was on the rise in other European cities, led by Hitler, Franco and Mussolini.

“Among the impoverished workers of the East End, the British Union of Fascists (BUF) built their movement in a horseshoe shape around the Jewish community,” says author and historian David Rosenberg, whose relatives owned a stationery shop on Cable Street at the time. Throughout the mid 1930s, the BUF moved closer towards Hitler’s form of fascism with Mosley himself saying that “fascism can and will win Britain”. The British fascists also took on a more vehemently anti-Semitic stance, describing Jews as “rats and vermin from the gutter of Whitechapel”.

On Sunday 4 October 1936, Mosley led his Blackshirt supporters on a march through the East End, following months of BUF meetings and leafleting in the area designed to intimidate Jewish people and break up the East End’s community solidarity. Despite a petition signed by 100,000 people, the British government permitted the march to go ahead and designated 7,000 members of the police force to accompany it. The counter-protest, which itself was opposed by some Jewish groups concerned over sparking lawlessness, involved members from the Jewish and Irish communities, local workers and local Labour and Communist parties. In order to prevent the Blackshirt supporters from walking through the Jewish community, the 20,000 protesters formed a wall to block the route and were successful in disbanding the BUF march.

However scenes turned ugly, when the counter-protesters were met by police, who attempted to clear the road to permit the march of 2,000-3,000 fascists to proceed. The demonstrators fought back with sticks, rocks, chair legs and other improvised weapons. Rubbish, rotten vegetables and the contents of chamber pots were thrown at the police by women in houses along the street.

The violence prompted calls for tighter controls over protests and was a major factor leading to the passage of the Public Order Act 1936, which required police consent for political marches and forbade the wearing of political uniforms in public, which is widely considered to be a significant factor in the BUF’s political decline prior to World War II.

Despite the violent scenes, it was a wake-up call to London that fascism was an ugly movement that had to be confronted.

“The fact that so many different communities came together and resulted in such huge numbers turning out against countervailing pressures tells us something”, Rosenberg says. “It was a victory for the united people of the East End.”

Little is recognizable from that period on today’s Cable Street. Across the street from the train station that connects the East End to the city, a huge painting on the side St George’s Town Hall shows a confrontation between local residents and the forces of fascism that happened eighty years ago. 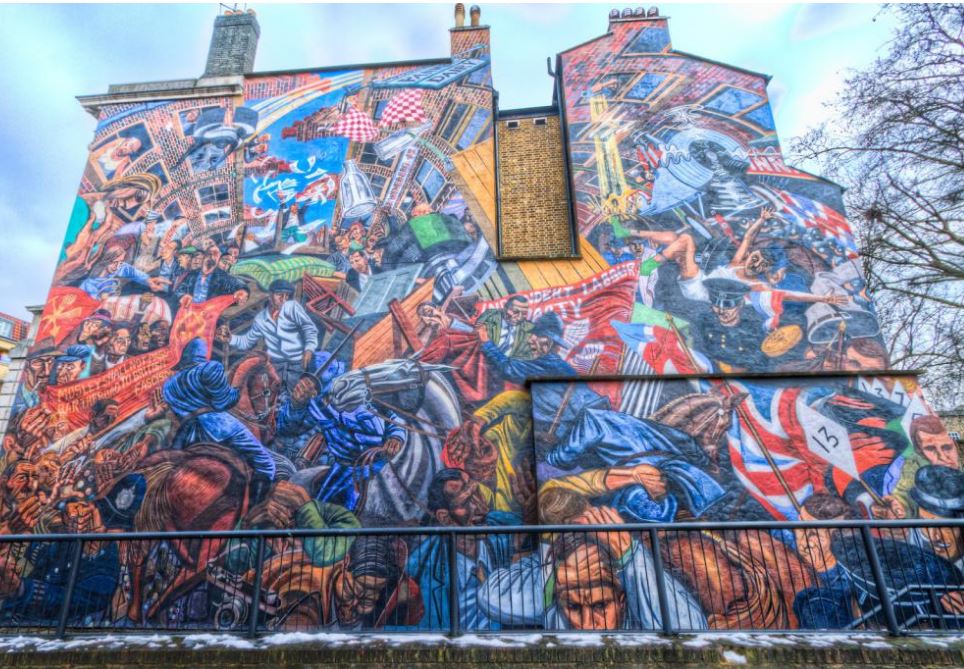 The Jewish community’s stand against prejudice prior to the Second World War has become famous, but many still have questions why the march was permitted despite so much local opposition and why police were ordered to baton charge the anti-fascist protesters.  Only a few years later, Britain would need to fight for it’s very survival in a European-wide offensive against a fascism that resembled the same evil anti-Semitism witnessed on Cable Street that day in October 1936. The same evil that resulted in the mass killing of millions of Jewish people during the holocaust.

Anti-Semitism is on the rise today, although more disguised than the black uniforms of fascism of the 1930’s. The anti-Semites have now picked their battle with the only Jewish State, Israel. The freedoms for which our forefathers laid down their lives are now being abused by protesters to express their hatred and lies towards Israel and the Jewish people.

We do not resort to violence, but neither will we allow the Jewish community to stand alone in the face of hatred.

A video looking back at “The Battle of Cable Street” where 100,000 Londoners stood with the Jewish people against Oswold…

Posted by Christians United for Israel – UK on Tuesday, October 4, 2016