Nikki Haley resigns as US Ambassador to the United Nations 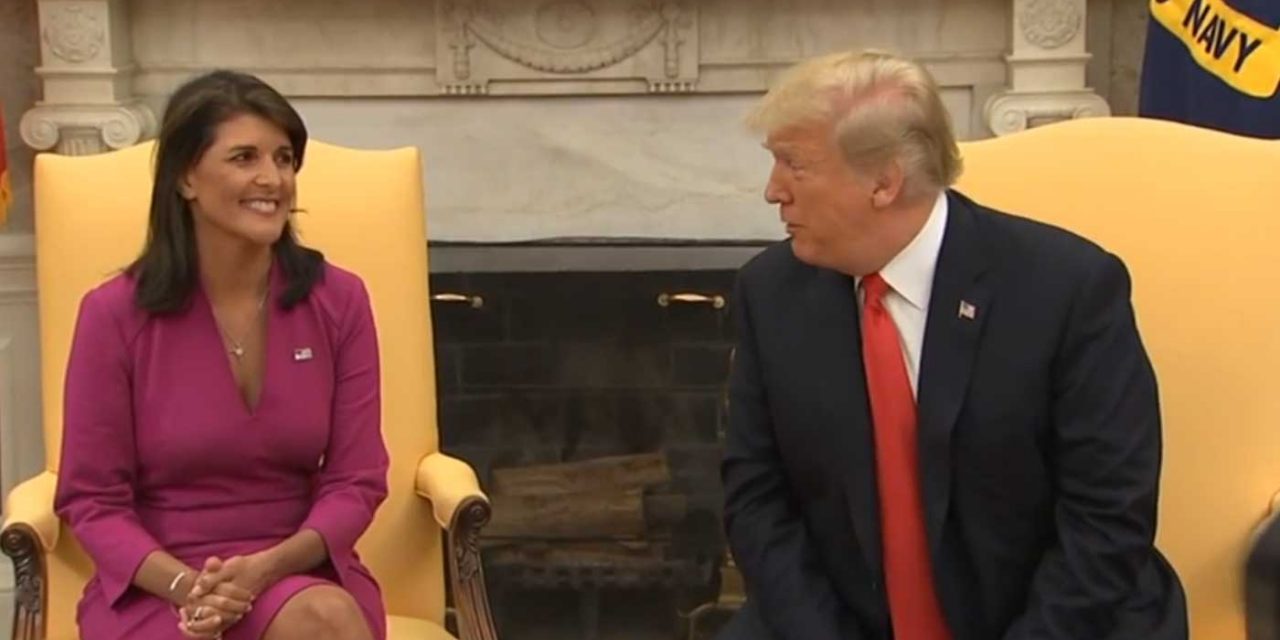 US Ambassador to the United Nations Nikki Haley has resigned from her position making an announcement today with President Donald Trump from the White House.

Ambassador Haley will be continuing her role until the end of the year.

President Trump and Ambassador Haley held a press conference on Tuesday where Haley told Trump: “Thank you, Mr President. It has been an honour of a lifetime.”

Ambassador Haley is said to be stepping down because she feels it is the right time and wanted to allow someone else to come in with new energy to fight against the UN’s anti-Israel and anti-American actions.

“It was a blessing to go into the U.N. every day with body armour,” Haley said, saying her job was to defend America on the world stage.

Mrs Haley dismissed rumours that she would be running for President in 2020, instead, she told journalists she would be campaigning for “this one”, pointing to the president.

“I don’t have anything set on where I’m going to go,” Mrs Haley said. “It’s been eight years of intense time, and I’m a believer in term limits.”

“I think you have to be selfless enough to know when you step aside and allow someone else do the job.”

The president said Ambassador Haley “has been very special to me, she has done an incredible job, she is a fantastic person, very importantly, but she is also somebody that gets it”.

“Hopefully you’ll be coming back at some point, right,” Mr Trump said. “Maybe a different capacity, you can have your pick,” the President joked. He then told those present that Haley had raised the position of the UN Ambassador, saying she made it a “very glamorous position”. Haley has indeed drawn much praise for her role in the UN and elevated the role.

President Trump told reporters that there was currently no replacement for the role but that a number of people were interested in the position. He also said he would consult Nikki Haley on who she thinks would be a suitable replacement for her.

Haley, 46, served as governor of South Carolina, the first woman to hold the job, from 2010 until she was appointed to Trump’s Cabinet after his election in 2016, winning confirmation 96-4.

One person who will miss Ambassador Haley’s presence at the UN is Danny Danon, Israel’s ambassador to the UN, who thanked Haley for her support of Israel, which he said helped change the Jewish state’s status at the world body.

“Thank you for standing with the truth without fear. Thank you for representing the values common to Israel and the United States,” he said in a statement.

“Wherever you are, you will continue to be a true friend of the State of Israel,” Dannon added

Ambassador Haley is also a good friend of Christians United for Israel. She was a keynote speaker at our Washington Summit this year where she was given CUFI’s “Defender of Israel” award.

Pastor Hagee, the founder of CUFI, said at the time “few people in the history of American diplomacy can be compared to the woman whose last 18 months have been spent fearlessly confronting the unreasonable and immoral anti-Israel bias at the United Nation. Ambassador Nikki Haley is a courageous voice of truth in one of the most misguided, hypocritical organisations in the world, the United Nations.”

“Each year the leadership of CUFI selects the one person in America that we feel has done the most to defend and protect Israel. We are delighted and highly honoured to present this award to Ambassador Haley,” Hagee said as he presented her with the award.

The award is a large golden plate engraved with Isaiah 62:1 – “For Zion’s sake I will not keep silent, for Jerusalem’s sake I will not remain quiet, till her vindication shines out like the dawn, her salvation like a blazing torch.

We pray every blessing over Nikki Haley as she concludes her time as US Ambassador to the United Nations and God’s hand in all that she does moving forward. Thank you Ambassador Nikki Haley.