Netanyahu, world leaders discuss next steps in returning to normal after Coronavirus 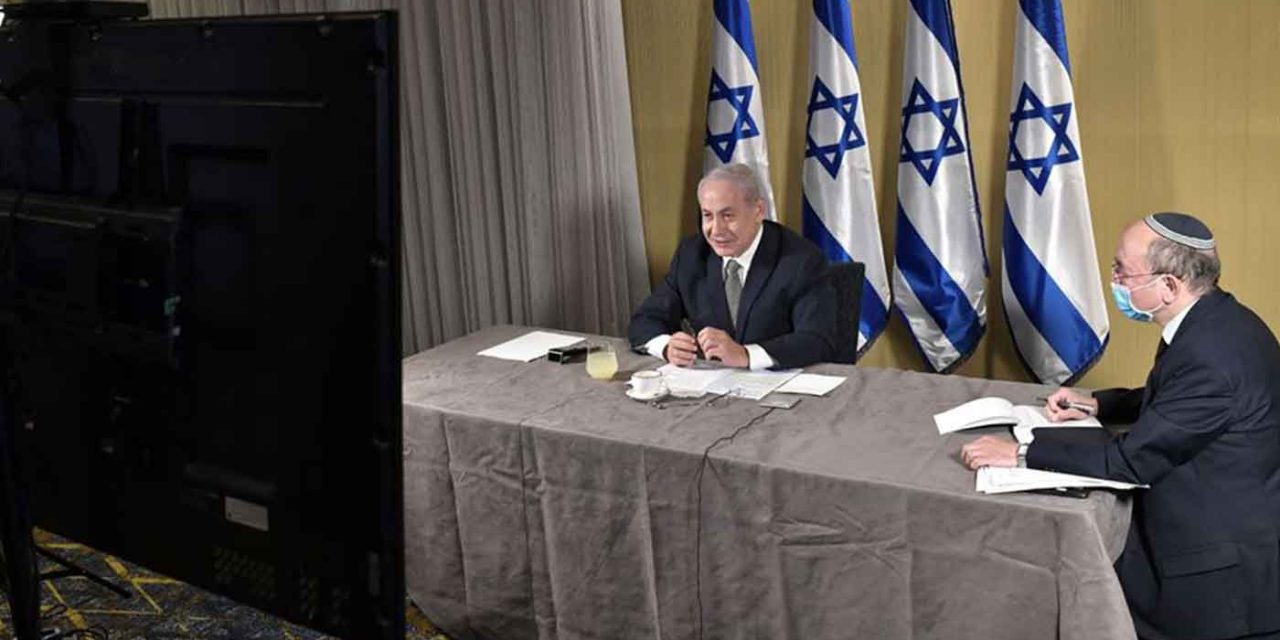 The first meeting of the ‘Immune Countries Alliance’ took place this week online with the participation of the leaders of Denmark, Greece, the Czech Republic, New Zealand, Australia, Austria and Israel.

Israel has joined the new initiative, led by Austrian Chancellor Sebastian Kurz, bringing together relatively small countries that feel they have succeeded in beating Covid-19 and are working to get back to normality.

The countries would open their borders between each other, in order to boost their tourist industry and help revive their economies.

Prime Minister Benjamin Netanyahu participated today in a conference of the leaders of the countries at the forefront of dealing with the coronavirus pandemic, hosted by Austrian Chancellor Sebastian Kurz. The leaders discussed ways to resume safe flights between their countries and steps to return to a safe routine in the shadow of the coronavirus.

Pursuant to the conferences held in previous weeks, the leaders met again this morning in order to discuss the steps taken by their countries to return to a safe routine in the shadow of the coronavirus, as well as the steps to spur economic activity, especially tourism. The leaders agreed to continue consultations among themselves every few weeks.

The leaders noted from their countries’ experience that opening schools under social distancing restrictions had not led to a significant renewal of outbreaks, except for localized outbreaks that were dealt with on an individual basis.

The leaders expressed concern over a decline in motivation among their countries’ populations to be tested and wear masks in the public sphere; therefore, they decided to issue a joint call emphasizing the need to be strict about wearing masks and to be careful about maintaining public health.

The leaders discussed readiness for the outbreak of a second wave of the pandemic and agreed that the most effective way to prevent the spread of the pandemic was to use digital tools and a system that combines receiving test results in less than 24 hours and epidemiological investigations that are concluded in less than 48 hours.

Pursuant to the agreement from the previous meeting, that the Israel National Cyber Directorate would lead consultations among the partner countries on the subject of databases, the leaders welcomed the Israeli initiative to establish the Corona.net network based on the Israeli “Cybernet”. This initiative will – inter alia – facilitate exchanges of information about responses to the virus and warnings of outbreaks among many institutions in the platform’s member countries.

Prime Minister Netanyahu said at the conference:
“We’ve opened up our economy. Yesterday, we decided almost on the last batch which is restaurants, bars and so on, big parks, public parks, recreational, swimming pools and the like. It’s the beginning of summer now here. There is very little left. I think something to do with sports and movie theaters and so on. I guess that will be coming down the line in a few weeks.

The most important thing that we opened was the schools and the kindergartens. That’s the thing that I’m most interested to hear from you because I think it’s a question whether that’s a vehicle for spreading the disease. Our level of infections went down to a handful a day. Ten, fifteen, twenty. It came up yesterday. I want to see. It’s about forty but I don’t know if it’s a singular event.

But people think it’s over. I tell them, ‘It’s not over.’ I also tell them, as you must be telling them, that when it grows, we will go back. So I’m interested Sebastian, you opened your economy. You know you came after me on shutting down the country but you started before me opening the country. So I’m looking at you and I want to see whether the things that we did, or the things that you did, caused a significant increase or a momentary increase. For the moment, even the numbers that came up are well below our guideline.”

Prime Minister Netanyahu added, on the issue of flights:
“I’m sure you don’t want us to export to you viral concentrations, and in the same way we don’t want to import back to Israel viral concentrations. We have begun exploring this question two days ago in our airports. We’re already looking at things. One suggestion that came up is rapid pre-flight testing that would be agreed by all of us. Some kind of procedure and rapid information sharing, so that before people get on a flight, we have a degree of certainty that we are not bringing in people with the disease. I’d like to hear your ideas about that.

In Israel, as in all your countries, we have been very successful up to now. But I always say that we are on the 84th floor on the way down. We may be going down in an elevator and we may be just dropping very quickly. We don’t know. But it’s been successful up to now. Our economies are being practically opened up completely with the exception of international flights. I think that we’ll inevitably be forced into much more rigorous contact tracing, on the one hand, and on the other hand – information or disease testing before and after flights that don’t require people to sit in quarantine for 14 days once they get off the plane. That’s the only way that I think we have a chance on resuming the kind of aviation regime which we had before. That’s about where we are today.”