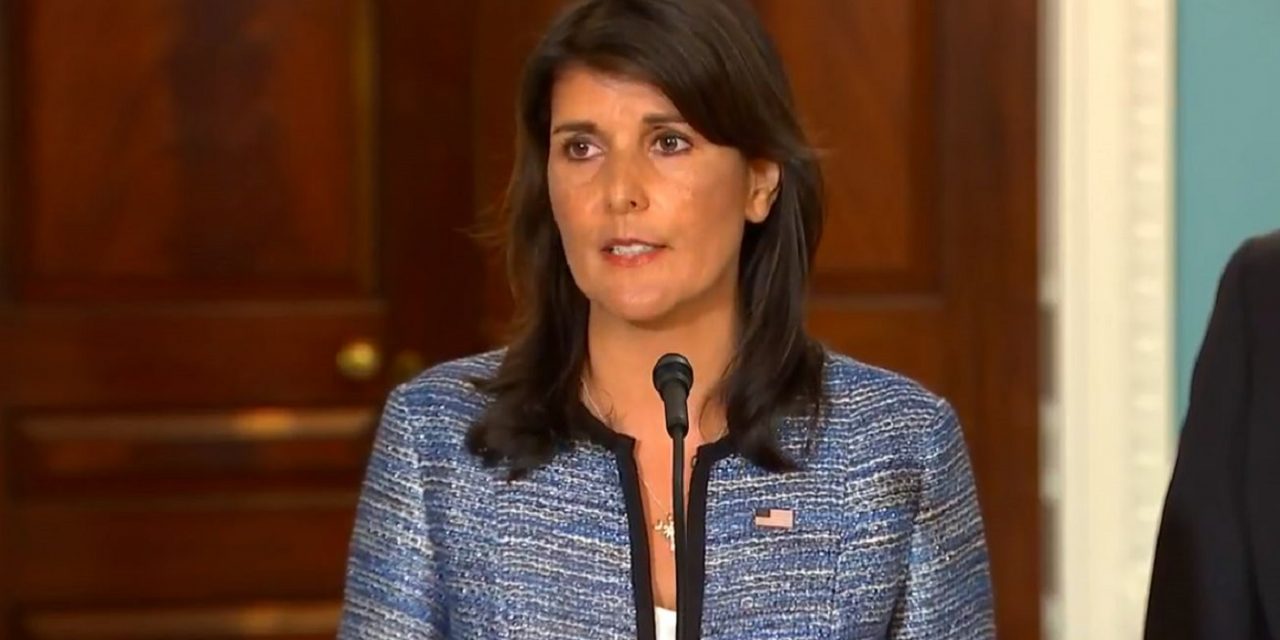 The United States is leaving the United Nations’ Human Rights Council, which Ambassador Nikki Haley called “an organization that is not worthy of its name.”

Haley said Tuesday the US had given the human rights body “opportunity after opportunity” to make changes. She lambasted the council for “its chronic bias against Israel” and lamented the fact that its membership includes accused human rights abusers such as China, Cuba, Venezuela and the Democratic Republic of Congo.

“We take this step because our commitment does not allow us to remain a part of a hypocritical and self-serving organization that makes a mockery of human rights,” Haley said.

BREAKING: Ambassador Nikki Haley has just announced that the US is withdrawing from the UN Human Rights Council.#US #UN #Israel #NikkiHaley

Posted by Christians United for Israel – UK on Tuesday, 19 June 2018

Secretary of State Mike Pompeo, appearing alongside Haley at the State Department, said there was no doubt that the council once had a “noble vision.”

“But today we need to be honest,” Pompeo said. “The Human Rights Council is a poor defender of human rights.”

The announcement came just a day after the UN human rights chief, Zeid Ra’ad al-Hussein, denounced the Trump administration for separating migrant children from their parents.

But Haley cited longstanding US complaints that the 47-member council is biased against Israel. She had been threatening the pull-out since last year unless the council made changes advocated by the US

“Regrettably, it is now clear that our call for reform was not heeded,” Haley said.

Still, she suggested the decision need not be permanent, adding that if the council did adopt reforms, “we would be happy to rejoin it.” She said the withdrawal notwithstanding, the US would continue to defend human rights at the United Nations.

Prime Minister Benjamin Netanyahu issued a statement thanking President Donald Trump, Secretary of State Mike Pompeo and Ambassador to the UN Nikki Haley for “their courageous decision against the hypocrisy and the lies of the so-called UN Human Rights Council.”

“For years, the UNHRC has proven to be a biased, hostile, anti-Israel organization that has betrayed its mission of protecting human rights,” Netanyahu charged. “Instead of dealing with regimes that systematically violate human rights, the UNHRC obsessively focuses on Israel, the one genuine democracy in the Middle East.”

He noted that the US decision to “leave this prejudiced body is an unequivocal statement that enough is enough.”

Israel’s Ambassador to the UN Danny Danon welcomed the announcement, stating that the UNHRC “has long been the foe of those who truly care about human rights around the world.”

“The United States has proven, yet again, its commitment to truth and justice and its unwillingness to allow the blind hatred of Israel in international institutions to stand unchallenged,” he added.

Danon thanked Trump, Pompeo and Haley for “their leadership” and called on “the moral majority at the UN to hold all of its institutions accountable.”