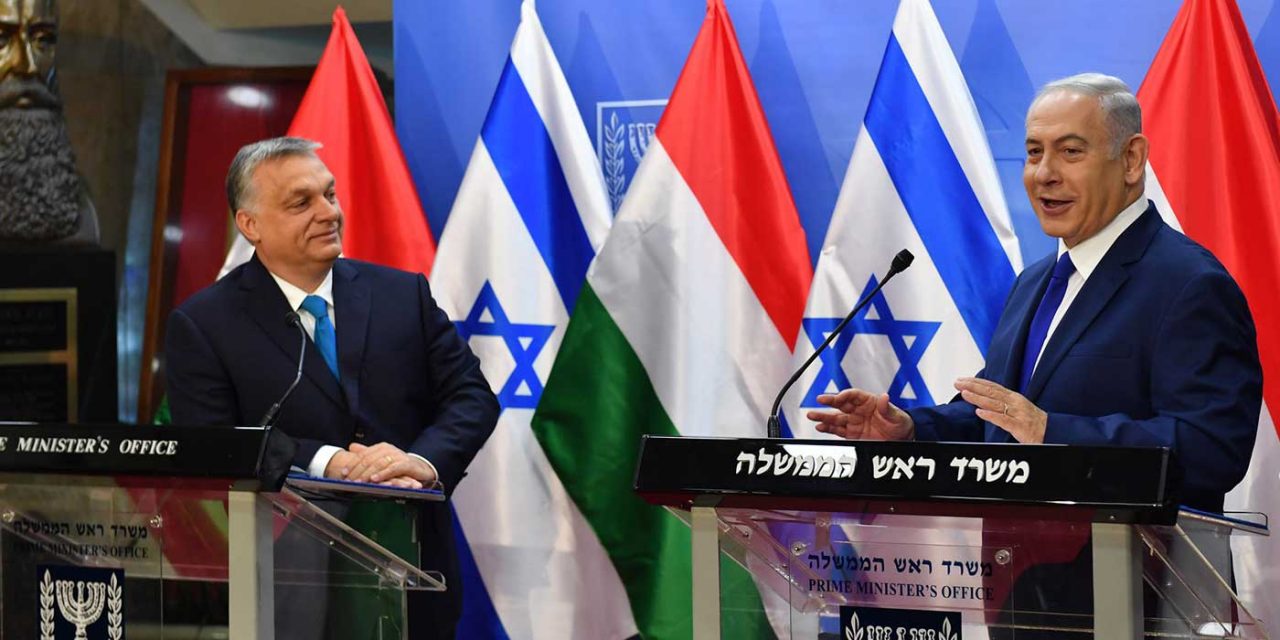 The Prime Minister of Hungary, Victor Orbán, is currently on a three-day tour of the Jewish state and met with Israeli Prime Minister Benjamin Netanyahu this moning where the two leaders exchanged warm gratitude and spoke of the threat of radical Islamic terror.

Speaking in a joint press conference Netanyahu said that “we both understand that the threat of radical Islam is a real one” which he he said could endanger Europe, the world and Israel’s Arab neighbours.

“We believe that of all the sources of militant Islam, Iran is the greatest threat to our common civilization and by being here, in this country here, at the front line of the battle of radical Islam, in many ways Israel is defending Europe,” he told the right-wing Hungarian prime minister, who has earned a reputation for his tough stance against immigration into his country.

“And I want to thank you for defending Israel. You have stood up for Israel time and time again in international forums,” Netanyahu said.

“It is deeply appreciated and it is important, and it is an important goal of Israeli foreign policy to change not only our bilateral relations with so many countries, and indeed our relations are flourishing as never before, it is also to change the way Israel is treated in international forum. And on this, Hungary has led the charge many, many times and I thank you for it.”

Prime Minister Benjamin Netanyahu met this morning at the Prime Minister's Office in Jerusalem with Hungarian Prime Minister Viktor Orban. The two met privately and then with their entourages.Prime Minister Netanyahu made the following remarks at the start of the meeting:"Prime Minister Orbán, Viktor, welcome to Jerusalem to you, your delegation, your wife.This is a reciprocal visit to my wonderful visit to Hungary. It was magnificent. Very impressive seeing your country, the great development that is taking place but also seeing the things that are so evocative to the history of our people beginning with the birthplace of our great prophet behind you, Theodor Herzl. His birthplace, the beginning of Zionism, the reason that we are all here. It all began in Budapest. We spoke also of the tragedies that afflicted the people, the Jewish people on the soil of Hungary and I heard you speak, as a true friend of Israel, about the need to combat antisemitism. Antisemitism has been the scourge of the Jewish people for thousands of years. It claimed horrible tragedies, culminating in the greatest tragedy of them all – the Holocaust in the 20th century. It must be fought continuously, relentlessly, unambiguously. In July, Hungary sponsored a statement in the UNHRC condemning antisemitism. In March, you inaugurated the renovated synagogue in Subotica. You said it was, 'a moral duty that Jews live without fear and practice religion freely.' You allocated 10 million forints for the renovation of synagogues. I think that the task is always before us because antisemitism continuously rears its head but these actions point to a positive direction, which we encourage all our friends to continue throughout Europe, throughout the world.In addition to preserving the memory of the past, Hungary and Israel are seizing the future. We are not big countries but big in aspiration, big in talent, big in intellectual capability and we are developing new industries. For example, Israel today has a car industry. You have a car industry. We don’t call it exactly a car industry but it is the software that makes transportation change radically and this is happening in so many other fields. I see the tremendous possibilities of cooperation between our two economies, between our entrepreneurs, between our businesspeople and we indeed cooperate in so many areas, in technology, in commerce, in tourism, in security and much more. We both understand that the threat of radical Islam is a real one. It could endanger Europe, It could endanger the world. It certainly endangers us and our Arab neighbors. We believe that of all the sources of militant Islam, Iran is the greatest threat to our common civilization. And by being here, in this county here, at the frontline of the battle against radical Islam, in many ways Israel is defending Europe.I want to thank you for defending Israel. You have stood up for Israel time and time again in international forums. It is deeply appreciated and it is important, and important goal of Israeli foreign policy to change not only our bilateral relations with so many countries and indeed our relations are flourishing as never before. It is also to change the way Israel is treated in international forums and on this Hungary has led the charge many, many times and I thank you for it. I want to thank you also for hosting the Visegrád Group during my visit in Hungary and affording me the opportunity to meet with your colleagues. We believe this is an important relationship, an important association, which we intend to strengthen and develop.We can say next year or possibly even this year in Jerusalem. Welcome friend."Video: Roy Avraham, GPOSound: Nir Sharf, GPO

Posted by The Prime Minister of Israel on Thursday, 19 July 2018

The Prime Minister of Hungary thanked Netanyahu for his visit to Budapest last year and said: “We are experiencing a crisis of immigration and terrorism in Europe, terrorists are exploiting immigrants’ paths to Europe, we must take steps against this phenomenon.”

“Hungary has zero tolerance for all manifestations of anti-Semitism. All Jewish citizens in Hungary are protected by the government, and we are proud of that,” Orbán added.

Hungary’s prime minister also talked about his relationship with Netanyahu. “The excellent ties between Israel and Hungary stem from the excellent relations between Netanyahu and me. Both countries have a patriotic leader, and it makes sense that a Hungarian patriot and a Jewish patriot find common ground,” said Orbán.

“This year we celebrate 30 years of renewed diplomatic ties between the two countries. We both agree on how to deal with the challenges facing us in the 21st century,” the Hungarian prime minister asserted.

“We see eye to eye on matters related to security and the preservation of the state’s borders, and we fully agree that security is the most important thing, and every nation has the right to defend its citizens,” Orbán concluded.