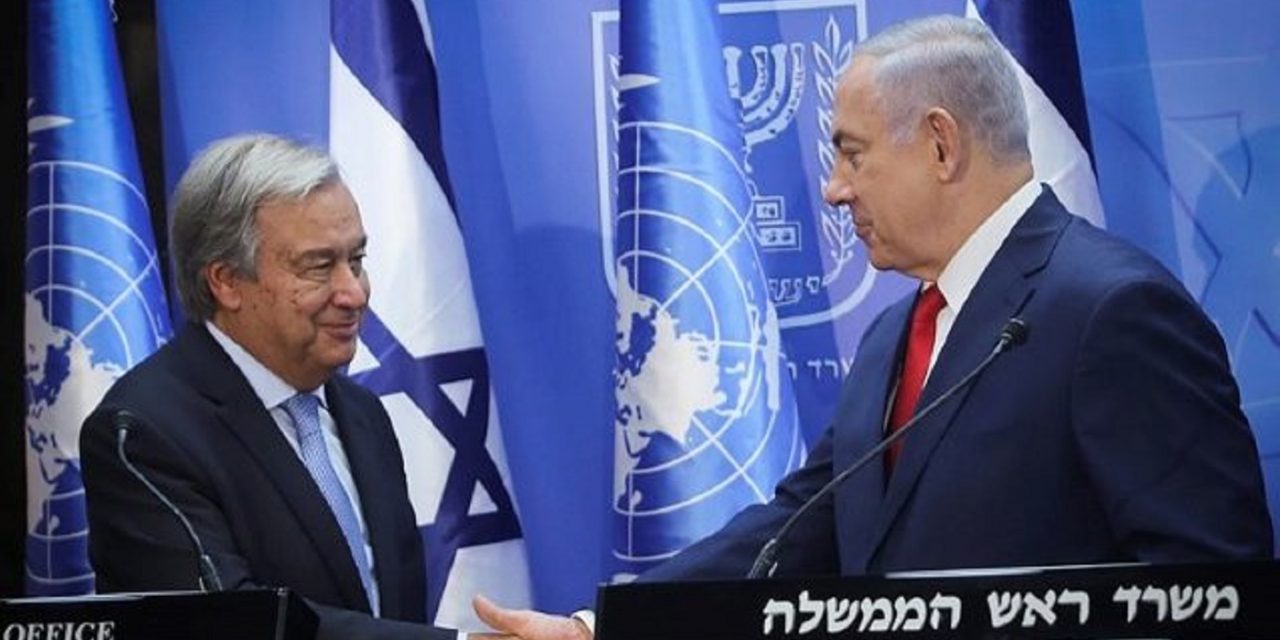 Guterres is on a three-day visit to the Jewish State, the first since his appointment in January.

“Iran is busy turning Syria into a base of military entrenchment and it wants to use Syria and Lebanon as warfronts against its declared goal to eradicate Israel,” Netanyahu told Guterres, warning that “Iran is also building sites to produce precision-guided missiles towards that end in both Syria and in Lebanon.”

Syria reportedly enjoys a missile industry that Iran set up in the city of Aleppo. The missiles manufactured in Aleppo were said to be used by the Hezbollah terror group against Israel during the Second Lebanon War in the summer of 2006, and Iran’s support for the terror organization, as in the missile industry, is part of a regional strategy.

Netanyahu stressed that this reality is one that Israel cannot accept.

Furthermore, “this is something the UN should not accept,” the prime minister stated. “And I intend to speak to you at great length about this, and other tasks that I believe are important for the makings of peace and security in the world.”

Netanyahu presented Guterres with military intelligence on Iran’s threats against Israel on its northern borders.

As for the UN’s notorious anti-Israel bias, Netanyahu noted that Guterres has said that the “calling for the destruction of Israel is a modern form of anti-Semitism.”

“You have clearly demonstrated the desire since you have taken office to turn a new page in the relations between Israel and the UN. This is something I want too, and I look forward to working with you towards that joint mission,” Netanyahu said.

“There is no question that we’ve had a troubled relationship with the UN. I think it has an absurd obsession with Israel, flagrantly discriminatory tactics. You don’t have to be the Israeli prime minister to understand that, and I think people of good faith and common sense understand that,” Netanyahu underscored,

The prime minister expressed hope that Guterres will “have an opportunity on this visit to see Israel. It’s a robust democracy. It’s a very advanced country. It’s a country that engages in the pursuit of knowledge and the betterment of our own people, the betterment of humanity.”