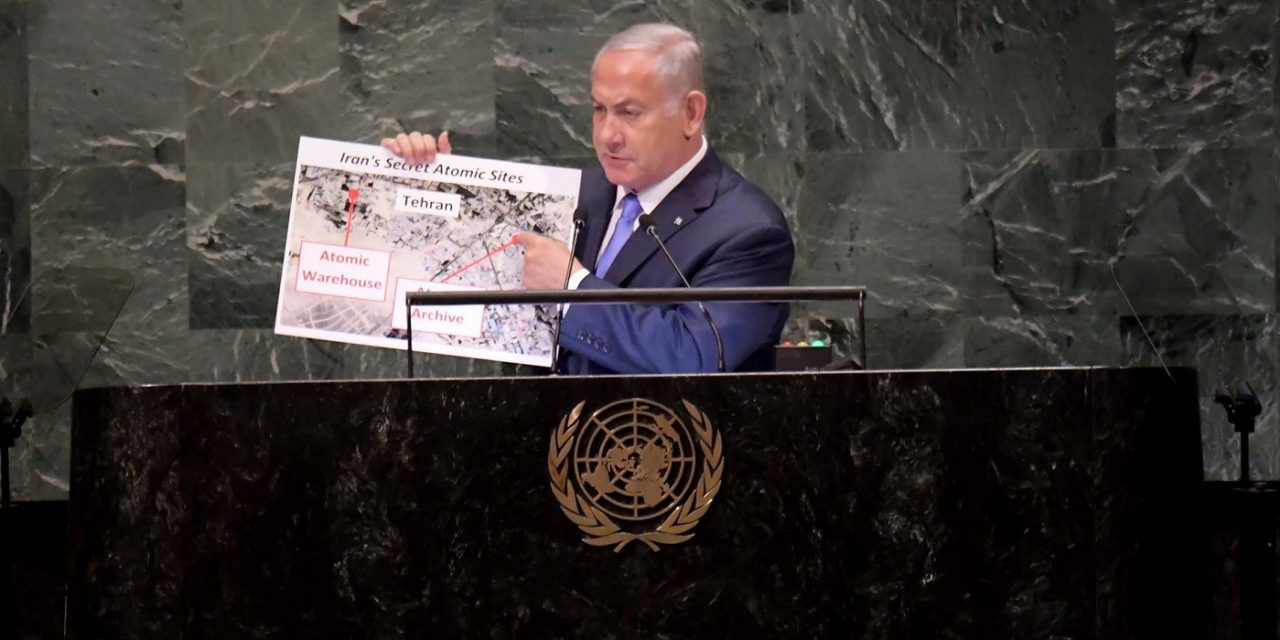 CUFI – Today during his speech to the United Nations General Assembly, Israeli Prime Minister Netanyahu stunned the world by revealing the existence of a second secret Iranian “atomic warehouse.” Although Israel had previously shared this information with several international intelligence agencies and the IAEA after covertly raiding Iran’s secret nuclear archive in February of this year, today was the first time Israel publicly released the news of this second site.

Prime Minister Netanyahu told the UN delegates that the world’s inaction on the intelligence Israel provided about Iran’s illegal nuclear program forced him to make today’s bombshell announcement. He hopes to pressure the IAEA to perform immediate inspections on Iran’s nuclear facilities before Iran can destroy all of the evidence that their nuclear program is still underway.

According to Mr. Netanyahu, last month Iranian officials removed 15 kilograms of radioactive material from this second secret warehouse and spread it around Tehran in an effort to hide the evidence of their illegal weapons development. In addition to illegally trying to circumvent inspections by the IAEA, Iran has endangered their own citizens in Tehran by exposing them to highly toxic material without their knowledge. Israel’s intelligence service has monitored Iran’s frantic attempts to dispose of the evidence at this site, and unless inspections take place soon, Iran may succeed in hiding its illegal activities from the world.

The prime minister then gave a scathing overview of how Iran has deliberately funded and directed terrorism and war in the region, not just against Israel, but against many other Middle Eastern states. He also blamed the 2015 Iran Deal for making the situation far worse. “This deal did not push war farther away. It brought war closer to our borders.”

Netanyahu warned that Israel remains determined to prevent Iran’s proxy Hezbollah from succeeding in its plot to consolidate power in Lebanon and Syria in preparation for attacking Israel. “I have a message for Hezbollah today. Israel knows what you’re doing. Israel knows where you’re doing it. And Israel will not let you get away with it.”

This speech comes after a week where the United States has put severe pressure on Iran at the United Nations General Assembly. President Trump, leading a UN Security Council meeting on Wednesday and also in his speech to the General Assembly on Tuesday, strongly condemned Iran’s pursuit of nuclear weapons and support for terrorism. He announced that after scheduled US sanctions against Iran take effect in early November, he intends to pursue additional sanctions against Iran. President Trump’s message to the world was clear: Those who wish to do business with the United States, cannot do business with Iran.

We applaud President Trump’s strong stand against the Iranian regime’s threat to world peace and the security of both the United States and Israel, and we support continued cooperation between Israel and the United States in exposing and dismantling Iran’s nuclear weapons program.

Also this week, President Trump and Prime Minister Netanyahu met on Wednesday to discuss the US-Israel relationship and the Trump Administration’s hopes for crafting a peace plan that both Israel and the Palestinians will find acceptable.

Before the private meeting, President Trump stated publicly: “We’re talking trade.  We’re talking military.  We’re talking defense.  And we are very much in favor of what Israel is doing as far as their defense is concerned.  They’re aggressive, and they have no choice but to be aggressive.  It’s a very difficult part of the world.  So I just want to let Benjamin, let all of the people know — let Bibi know — that we are with you.  We are with Israel 100 percent.”

Pastor Hagee stated that this meeting was “a strong signal to leaders around the world that the sacred bond between the United States and Israel has never been stronger and we will continue to stand together.”

WATCH the incredible speech in FULL by Prime Minister Netanyahu at the UN General Assembly."I am proud of the people of Israel, who draw extraordinary strength from the deep wellsprings of our heritage, who possess an unbreakable spirit and who are determined as ever to build a secure and magnificent future for the one and only Jewish state. "#Netanyahu #Israel #UN

Posted by Christians United for Israel – UK on Thursday, 27 September 2018