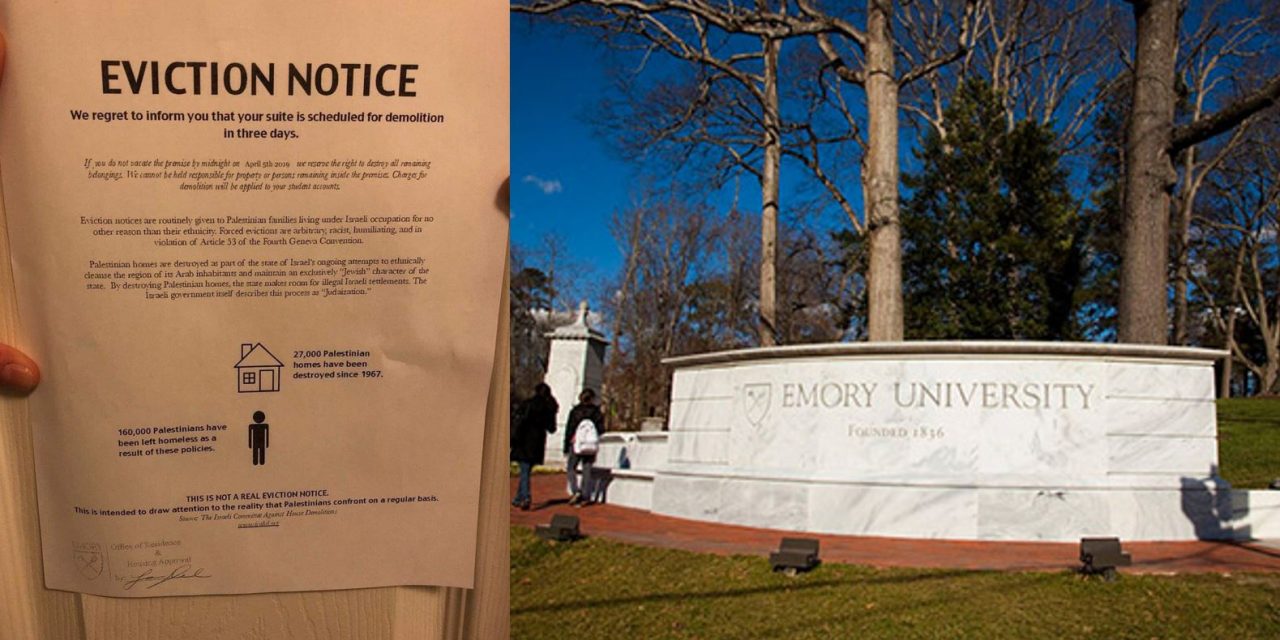 Several mock eviction notices were found outside the doors of student dorm rooms at Emory University on the morning of April 2.

The notices state, “We regret to inform you that your suite is scheduled for demolition in three days.” It proceeds to state that “eviction notices are routinely given to Palestinian families living under Israeli occupation for no other reason than their ethnicity” and then it’s “part of the state of Israel’s outgoing attempts to ethnically cleanse the region.”

Jewish students with Mezuzahs on their doors @EmoryUniversity woke up this morning to these “eviction notices”.

It’s not the Jews, it’s just Israel they said.. pic.twitter.com/5zSIEwbH1r

Emory student Anthony Wong wrote in an op-ed for The Emory Wheel, a student-run newspaper, that Emory Students for Justice in Palestine (ESJP) were behind the notices as part of Israeli Apartheid Week. Wong praised ESJP “for starting the discussion” about Palestinian home demolitions.

However, Rabbi Russ Shukles, who heads the Hillel of Georgia, told WSB-TV Atlanta that he thought the notices were “racist, anti-Semitic and absolutely offensive.”

“From anger to fear to security issues, how could Emory allow this to take place?” Shukles said.

Emory Hillel director Dave Cohn told the Algemeiner that there wasn’t any evidence indicating that Jewish students were specifically targeted by the notices. However, Cohn told the Hillel community in an email that they are “defending the safety of our students from this intrusion on their privacy and security.”

The university told Algemeiner that the flyers were taken down because they violated the university’s posting guidelines. The university also told WSB that permission was not given for the flyers to be posted on the doors of student dorm rooms and they are determining the next course of action.

Simon Wiesenthal Center Associate Dean Rabbi Abraham Cooper told the Journal in a statement via email, “Such insidious intimidation against Jewish students occur with such impunity when university officials fail to take decisive action against perpetrators. Jews deserve same protection given to other minorities when hateful threats are launched against them.”