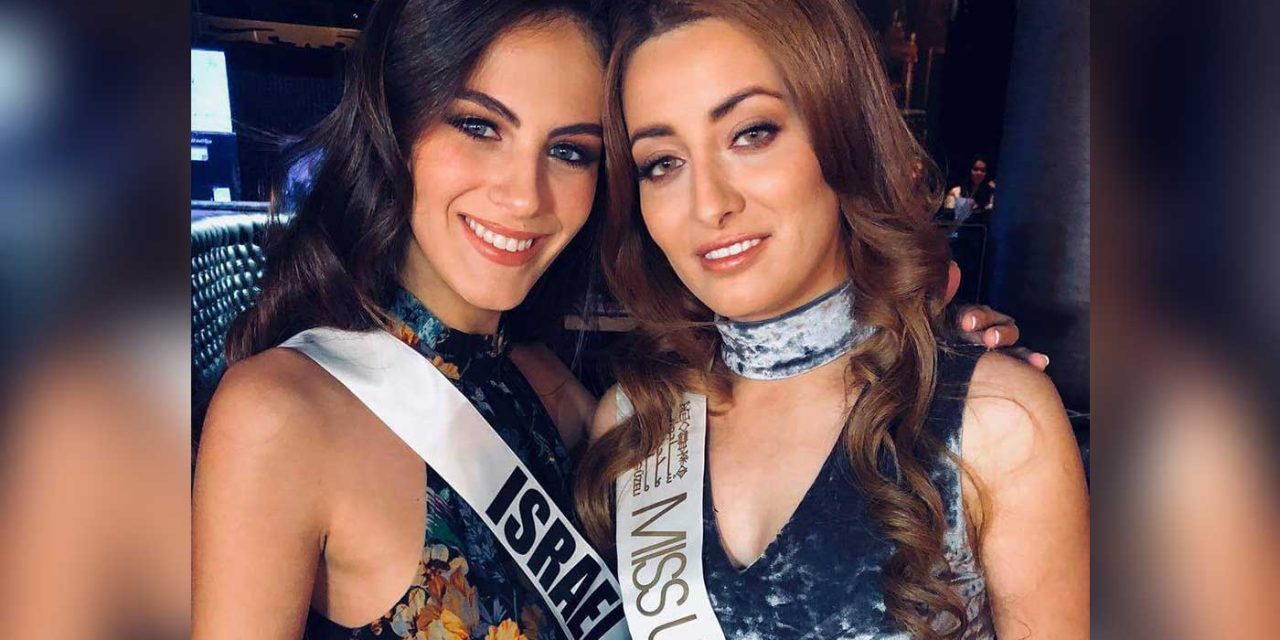 During the Miss Universe 2017 contest in Los Angeles last year, Miss Iraq, Sarah Idan, sparked controversy when she posed for a selfie with Miss Israel, Adar Gandelsman prompting death threats that resulted in her family fleeing the country.

Idan posted what she thought was a harmless picture of the two on Instagram with the message, “Peace and Love from Miss Iraq and Miss Israel”.

The next morning she woke up to a flurry of death threats along with a string of messages from the Iraqi authorities who were threatening to strip her of her Miss Iraq title.

“When I posted the picture I didn’t think for a second there would be blowback,” she told CNN at the time. “I woke up to calls from my family and the Miss Iraq Organization going insane. The death threats I got online were so scary.”

The controversy surrounding this incident resulted in Idan’s family having to flee Iraq, and Idan has not been able to return to the country for fear of her safety.

Ms Idan and her family relocated to the US, but on Monday she was reunited with Ms Gandelsman in Israel, where the two posted fresh pictures online. Ms Idan posted a photograph and a video on her Instagram page, with the caption “Sisters reunion”.

The pair also shared a video with Miss Iraq saying the Hebrew greeting of “Shalom” whilst Miss Israel gives the Arabic greeting of “Salam”. Both words mean “peace” in their respective languages.

When the pair reunited in Jerusalem, Idan told Gandelsman she had always hoped to meet her again, but assumed it would be in Los Angeles – not in Jerusalem.

“I don’t think Iraq and Israel are enemies, I think maybe the governments are enemies with each other,” Idan said in an interview with Channel 2 News on Tuesday. “With the people – there’s a lot of Iraqi people that don’t have a problem with Israelis with the Jewish people.”

Idan has also shown that she is more than just a friend of Miss Israel but has spoken out against Israel’s enemies – in particular, Iran and their terrorist proxies Hamas and Hezbollah.

When a Twitter user claimed Saudi Arabian Prince Salman was an “Israeli agent leader” because of his warming ties to Israel, Sarah Idan replied, “This mentality has to change, anyone who express they want peace w/ Israel are always Israeli agents.. We know why they’re angry cause he’s a threat to Iran who’s the main source of aid to Hamas and Hizbollah. Iran is the worst thing happened to Arabs.. history will tell you…”

This mentality has to change, anyone who express they want peace w/ Israel are always Israeli agents.. We know why they’re angry cause he’s a threat to Iran who’s the main source of aid to Hamas and Hizbollah. Iran is the worst thing happened to Arabs.. history will tell you…

“Miss Iraq Sara Idan is currently visiting Israel & has reunited w/ Miss Israel, her old friend from the @MissUniverse pageant,” he wrote on Tuesday. “Welcome to Israel! Friendly relations between Israelis & Arabs will definitely help in ushering in a better tomorrow for all of us in the Middle East.”

Neither Idan nor Gandelsman placed in the Miss Universe competition last year, but clearly, they have won each other’s friendship and hearts of many Israelis.