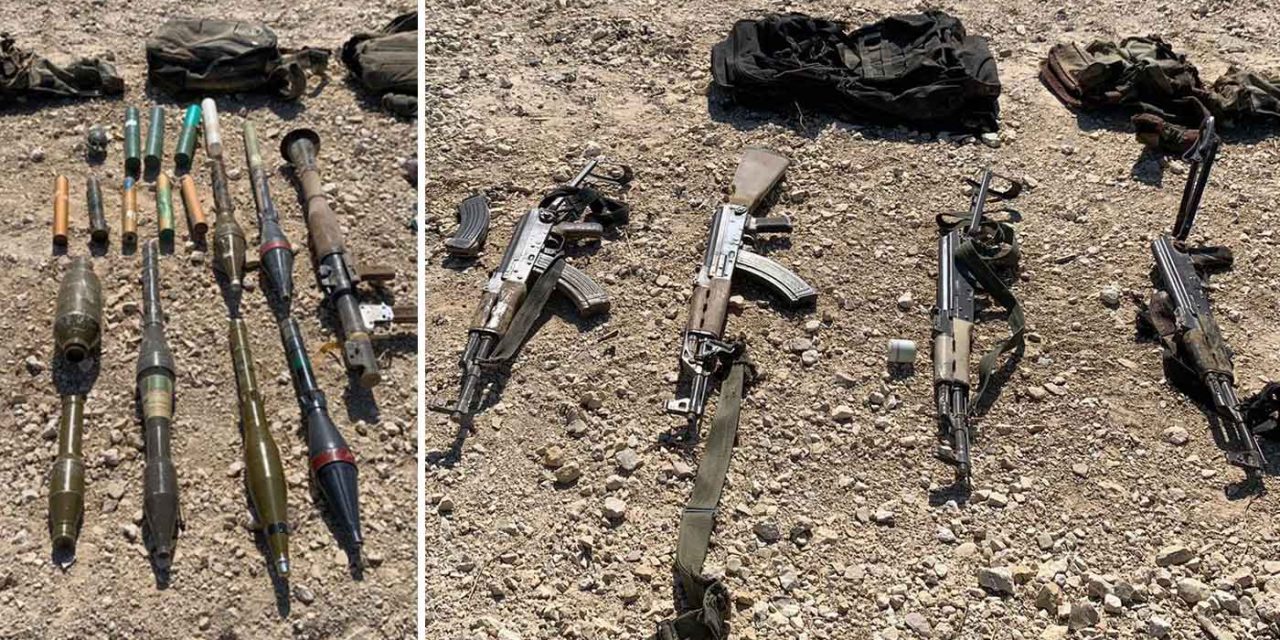 The Israeli army thwarted Saturday morning an attempt to infiltrate Israel from the Gaza Strip. The Israel Defense Forces (IDF) opened fire and killed all four fully-equipped fighters who approached the security fence in the southern border.

The IDF spokesperson issued a statement saying that apparent from the manner of operation of the terrorist squad, a “very big terror attack was thwarted.”

These are the weapons possessed by the terrorists who attempted to infiltrate into Israel from Gaza last night.

In predawn Saturday, “IDF troops identified a number of terrorists approaching the security fence in the southern Gaza Strip. The terrorists were armed with AK-47 assault rifles, RPG grenade launchers and hand grenades,” an earlier statement by the IDF spokesman read.

“IDF fighters, who prepared accordingly due to the identification, opened fire once one of the terrorists crossed the fence, neutralizing the terrorists. During the incident, a hand grenade was hurled at the troops by the terrorists. No IDF injuries or damage were reported.”

On a tour of the Gaza border, Chief of General Staff LTG Aviv Kohavi praised the men & women who stopped the terror infiltration from Gaza over the weekend. pic.twitter.com/sbLplYxQ1q

Following the incident on the border fence, Israeli forces attacked a Hamas outpost at the Deir al-Balah area in central Gaza Strip, according to Sky News in Arabic.

The Hamas spokesperson released a statement on Saturday referring to the incident on the Gaza Strip border. “Israel committed another crime against a young group that is angry over its recurring crimes, organized terror and ongoing blockade over the Gaza Strip,” Hamas said.

“The sons of our people are subjected to stress and fury due to the ongoing siege of Gaza which consequences are Israel’s responsibility,” Hamas added and said, “this behavior will motivate the furious young to commit actions of loners.”

Sources in the Gaza Strip said three of the deceased were Hamas security forces that tried to stop a fourth man from breaching the security fence, reported outlets from Gaza. However, according to other Palestinian reports, the four fights were Hamas Salafit members who quit the organization two months ago.

IDF makes arrests in Sorek murder case
The incident in the south comes as tensions between Israel and Palestinians intensify. Israel’s security establishment have reportedly identified Friday the alleged killer or killers of IDF soldier and yeshiva student Dvir Sorek, whose body was discovered overnight Thursday in the West Bank.

Hours earlier, Israeli security forces were said to have arrested a Palestinian man in the West Bank village of Beit Fajjar and confiscated his car, believing it may have played a role in the crime, according to Hebrew-language broadcaster Kan News.

On August 1, a Palestinian gunman left three Israeli soldiers wounded along the Gaza border overnight after opening fire on a nighttime patrol.

The gunman, who was wearing a Hamas military wing uniform, was killed in the gunfire exchange with IDF troops. One of the injured soldiers was an officer, reportedly in moderate condition, and the two others were treated for light injuries.

According to Hebrew media, the Golani unit that faced the gunman a little over a week ago is the same unit that neutralized the attempted infiltration on Saturday.