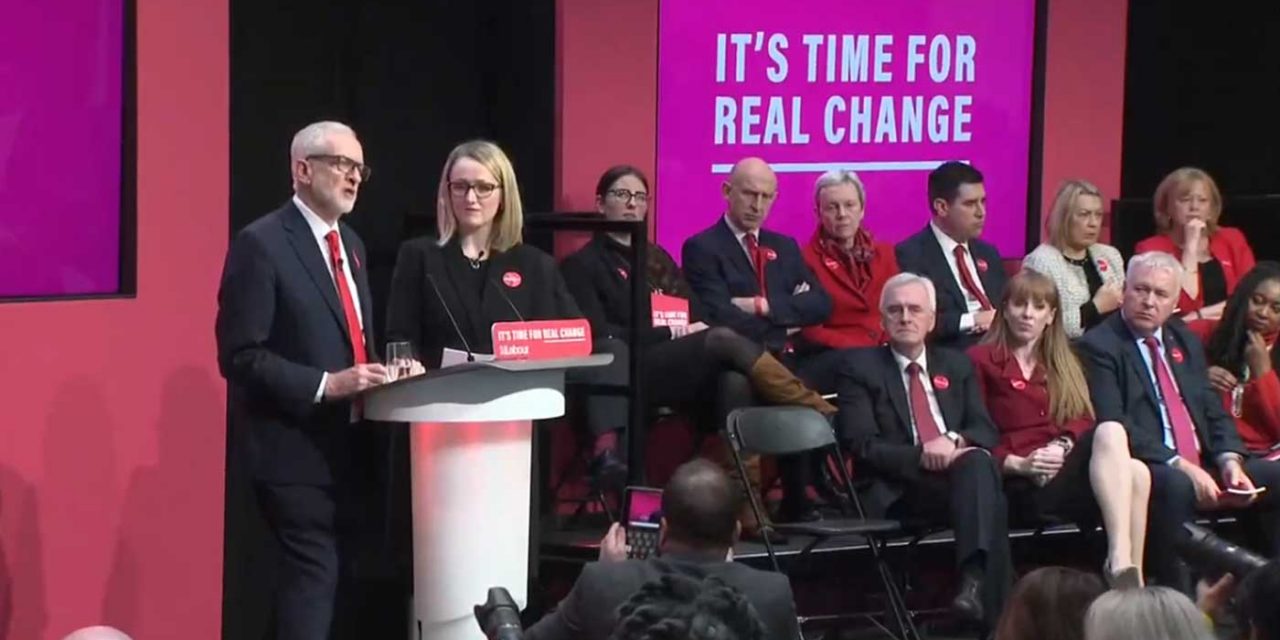 The Labour manifesto for the forthcoming election has announced that the party will recognise a state of Palestine immediately if it comes to power.

The manifesto, that remarkably makes no mention of anti-Semitism, also says that Labour will suspend arms sales to Israel.

“Labour is committed to a comprehensive peace in the Middle East based on a twostate solution – a secure Israel alongside a secure and viable state of Palestine. There can be no military solution to this conflict, which must be settled on the basis of justice and international law. All sides must avoid taking action that would make peace harder to achieve. That means both an end to the blockade, occupation and settlements, and an end to rocket and terror attacks. Labour will continue to press for an immediate return to meaningful negotiations leading to a diplomatic resolution. A Labour government will immediately recognise the state of Palestine.”

Regarding the sales of arms, the manifesto avoids any mention of human rights abuses by Palestinian terror groups and infers that Israel is using its weapons to target innocent civilians, which it is not. It states:

Immediately suspend the sale of arms to Saudi Arabia for use in Yemen and to Israel for arms used in violation of the human rights of Palestinian civilians, and conduct a root-and-branch reform of our arms exports regime so ministers can never again turn a blind eye to British-made weapons being used to target innocent civilians.

Consequences of cutting ties with Israel

Earlier this year the former commander of British forces in Afghanistan, Colonel Richard Kemp, told CUFI that the UK’s military cooperation with Israel is “some of the closest with any country in the world”. But this cooperation is not only militarily.

Aside from perhaps with the US, the UK enjoys “virtually the closest intelligence cooperation with Israel than with any other country in the world.”

“Mossad tipped off UK on Hezbollah bomb plot in London in 2015. One of many intelligence warnings provided to the UK by Israel,” said Kemp, “This would be stopped if Corbyn came to power, not by Israel but by Corbyn — he would terminate our intelligence relationship.”

Recognising a state of Palestine

In September Emily Thornberry declared that if she was to become foreign minister, “You can be assured that standing up for the Palestinians will be at the top of my list of priorities”.

She emphasised that such recognition would come “not in due course, not when the time is right, but now.”

The shadow minister added that there would be an immediate review of arms sales from the UK to Israel “to ensure that none of those weapons are being used to breach International law and attack innocent Palestinian civilians in Gaza or elsewhere”.

If the UK recognises “Palestine” it will undermine the peace process and bring Israel and the Palestinians further away from peace.

Instead of forcing the Palestinian Authority and terrorist groups like Hamas to turn away from extremism and come to the negotiating table, this move will reward Palestinian leaders for promoting and inciting violence against Israeli civilians.

It also undermines Israel’s sovereignty over areas of land that the international community deems as being part of “Palestine”.

There is no such thing as a “State of Palestine” and recognising disputed territories run by a dictatorship (the PA) and a terrorism organisation (Hamas) would further complicate the issue.

Most importantly it would place the United Kingdom in direct opposition to the Word of God. The Bible tells us that the land of Israel, including Judea and Samara (the so-called West Bank) were given to the Jewish people as an eternal inheritance. This was a commandment of God and cannot be broken. The Bible is clear that God will judge any nation that tries to divide up the land He gave to the Jewish people.