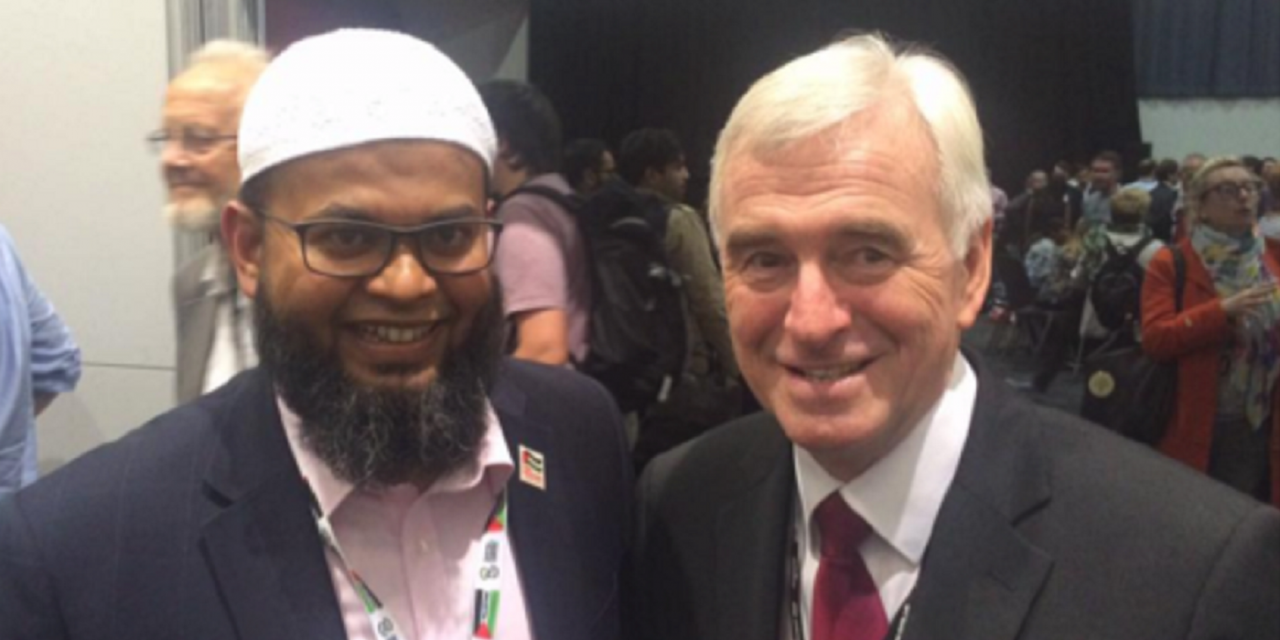 A Labour member who shared anti-Semitic conspiracy theories blaming Israel for 9/11, ISIS and the Charlie Hebdo attack was allowed to host an exhibition stall inside the Party’s conference last month, according to online blog, Guido Fawks.

Tapash Abu Shaim (pictured above at last year’s conference) was seen manning the Palestine Solidarity Campaign desk inside the secure zone at this year’s conference. Shaim was given a pass despite his social media activities being reported to the party in August and concerns being raised last year over his attendance at Labour conference 2016.

Shaim’s promotion of anti-Semitic conspiracies on social media has been well documented. In the wake of the January 2015 Paris terror attack he posted: “US politician Jack Lindblad claims Charlie Hebdo killings were ‘by US and Mossad’ to keep Israel’s Netanyahu in power”.

In another post he labelled terror group Daesh “ISIS = International Solidarity for Israeli Sentiment”. He shared yet another which read: “confirmed ISIS is a Mossad united state of IsraHELL creation”.

Shaim has also shared articles claiming 9/11 was a “Tel-Aviv based outside job”. He suggested the tragedy was: “a deluge of false flag terrorism.”

An eyewitness who was present at the party’s conference in Brighton said:

“Shaim hardly left the PSC stall, talking to members, answering questions and taking pictures. He had a conference pass on. A simple Google search would have revealed his past comments. It’s shocking he was allowed back in this year after especially his activities had been reported to the party.”

According to Guido Fawks, Labour has now launched an investigation into Mr Shaim’s behaviour. A Labour Party spokesperson said:

“We are an anti-racist party and condemn in the strongest possible terms antisemitism and all forms of discrimination – they have no place in our Party. Our recent rule change at Annual Conference show the Party is taking a pro-active approach to tackling antisemitism. This rule change will strengthen our disciplinary proceedings and help the Party uphold its core values of equality, solidarity and inclusion.”