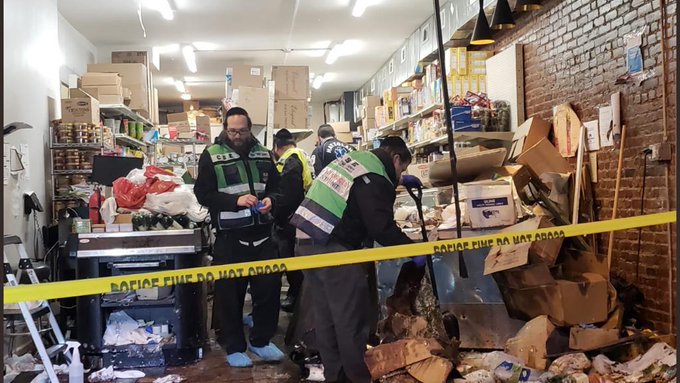 Latest reports confirm the attack was specifically aimed at the JC Kosher Supermarket, authorities say after reviewing the available footage from surveillance cameras.

“Based on our initial investigation [which is ongoing] we now believe the active shooters targeted the location they attacked,” Jersey City Mayor Steven Fulop said.

Initially, investigators believed that the JC Kosher Supermarket in Jersey City was not deliberately targeted, but the suspects are said to have “bypassed” multiple people to attack the store.

A live pipebomb was reportedly found in the back of the truck the suspects drove.

Chabad identified two of the dead as store owner Leah Minda Ferencz, 33, and 24-year-old Moshe Deutsch. In total, three Jewish civilians are reported to have been killed as the shooters stormed into the store after shooting a police officer dead at a Jersey City graveyard. Third deceased civilian has bot been identified yet.

The officer was later identified as Detective Joseph Seals, 40, reportedly approached the two suspects over a vehicle tied to a homicide earlier this weekend.

The incident continued to unfold at the JC Kosher Supermarket about a mile away, where five more bodies, including the two suspects, were found.

“I know the entire Jersey City community stands together with the Jewish Community during these challenging times,” Fulop said in a statement.

According to NBC New York citing officials, one of the two shooters has been identified as David Anderson, who was once a follower of the Black Hebrew Israelites, an African American religious movement claiming heritage from the ancient Israelites.

It has no links with mainstream Judaism and is designated as a hate group by the Southern Poverty Law Center.

The other shooter’s name is said to be Francine Graham; reports are now suggesting she also joined the black Hebrew Israelites after meeting Anderson, who is said to have published anti-Jewish and anti-police writings online.