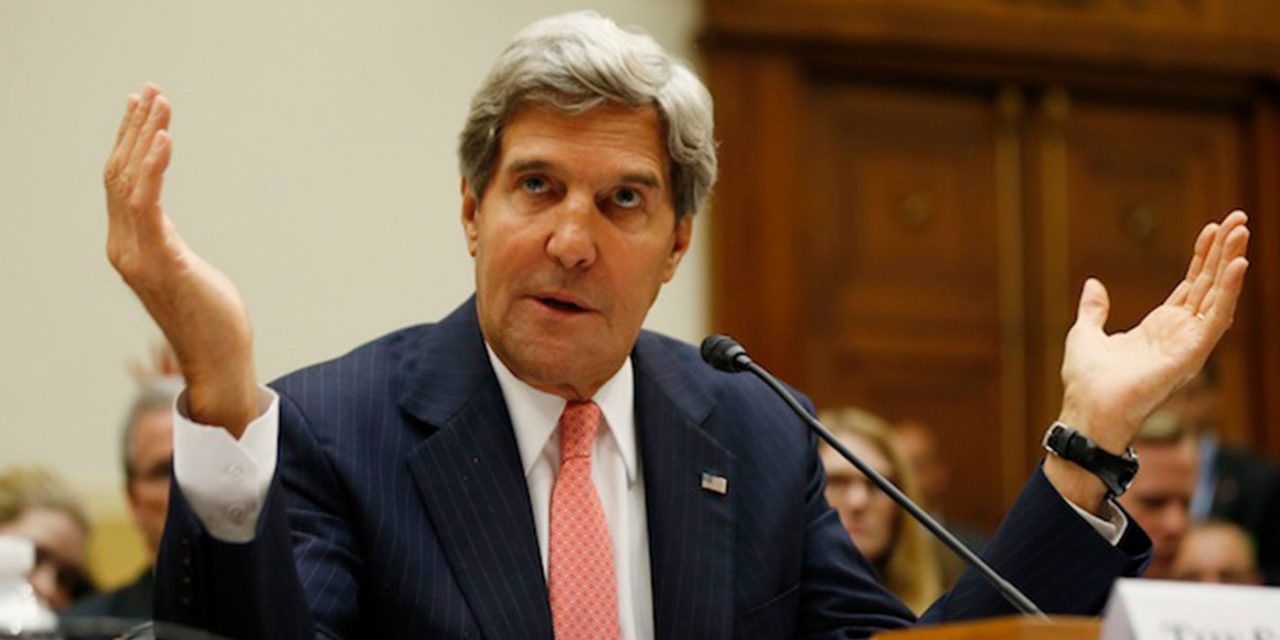 Former US secretary of state John Kerry blamed the Israeli government for a lack of peace in the region while praising the Palestinian leaders for their “extraordinary” commitment to “nonviolence” over the past 30 years.

In recordings published Tuesday by Channel 10, America’s former top diplomat can be heard saying, “the Palestinians have done an extraordinary job of remaining committed to nonviolence. And in fact when the [knife] intifada took place they delivered non-violence in the West Bank.”

Kerry was referring to the 2015 knife intifada, where hundreds of Palestinians, many from the West Bank, carried out stabbing attacks on Israeli civilians, killing dozens and wounding hundreds more. The actions of the terrorists were praised by Palestinian leaders and the attacks increased after Palestinian President Mahmoud Abbas said “we welcome every drop of blood spilled in Jerusalem”.

Mr Kerry continued that the commitment to non-violence “is overlooked by the general [Israeli] population because it is not a topic of discussion. Why? Because the majority of the cabinet currently in the current Israeli government has publicly declared they are not ever for a Palestinian state,” he said.

Kerry warned in the recording that frustrations among Palestinians could boil over into violence, despite the fact they are already using violence.

He continued, “If you see 40,000 kids marching up to the wall everyday with signs saying ‘give us are rights,’ I mean, I don’t think Palestine is going to be immune forever to the civil rights movements that have swept other nations in the world,” he says.

“That is not leadership,” Kerry said of Israel.

“If you don’t have leaders who don’t want to make peace, if the equation doesn’t change, I’ll be amazed if within the next 10 years if we don’t see some young [Palestinian] leader come along who says we have tried non-violence for the last 30 years and look, it hasn’t gotten us anything,” he says.

John Kerry fails to remember that for the past thirty-years, and longer, Palestinian leaders have spearheaded three intifadas against Israel, with Palestinian terrorists murdering thousands of Israeli civilians, targeting them both in Israel and abroad. Let’s be clear, that is not 30 years of committing to non-violence.

Channel 10 said the recording was made at a conference in Dubai in the past year attended by Middle East leaders.

In response to the recordings, the Prime Minister’s Office told Channel 10 Netanyahu would continue to safeguard Israel’s security and national interests, regardless of any pressure by “those who tried to prod [Israel] to make dangerous concessions and failed.”

It also placed the blame for the impasse in peace talks on the Palestinians “refusal to recognize Israel within any borders.”

“It is unfortunate John Kerry still doesn’t get this,” the PMO said.

John Kerry’s comments make it easy to see why the United States, under President Obama and Secretary John Kerry, made extremely anti-Israel moves including signing the Iran Nuclear Deal and allowing Resolution 2334 to pass at the United Nations Security Council.