Israeli judo medalist speaks for first time after Abu Dhabi refused to play anthem: “I decided to sing Hatikvah on the podium” 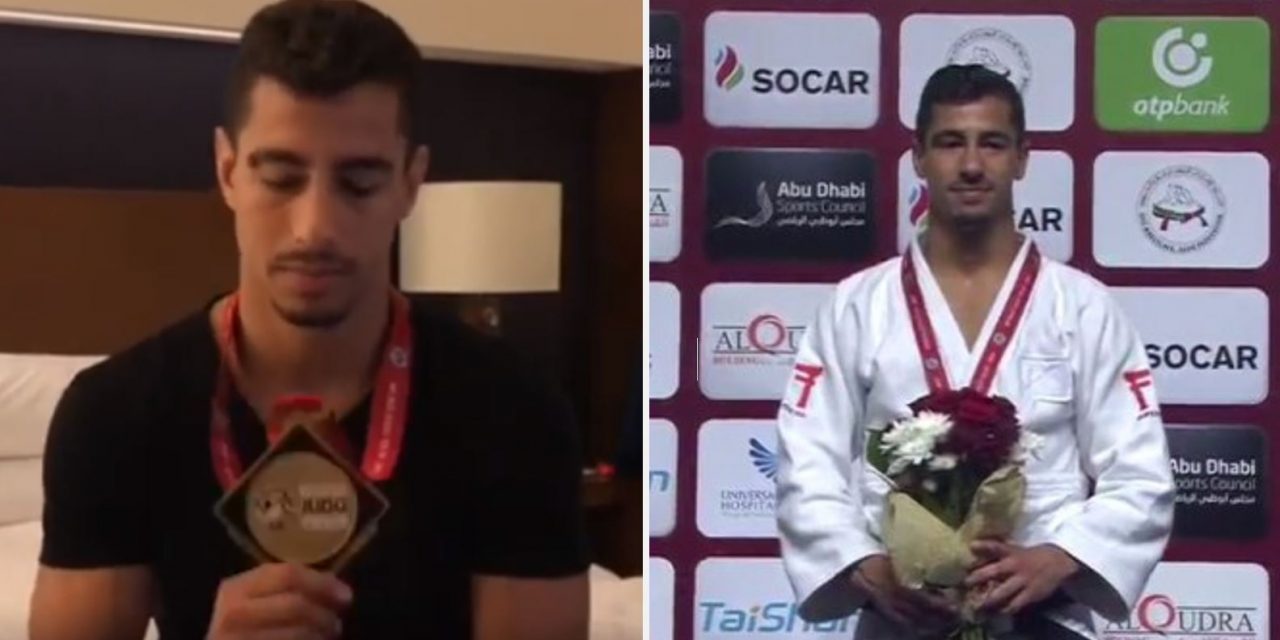 Two Israelis won medals at a judo Grand Slam tournament in Abu Dhabi, but organisers refused to play the national anthem of the medalists.

Tal Flicker stood on the podium to receive his gold medal in the men’s under-145 pound category on Thursday, but had to do so under the International Judo Federation flag whilst the anthem of the federation was played. However, Flicker himself has confirmed video clips that show he decided to sing the Israeli national anthem, “Hatikvah” anyway.

The same day, Gili Cohen won a bronze medal in the women’s under-114 pounds category and received the same treatment.

Earlier this month, Israeli team members were informed that they would not be permitted to compete as Israel, however competitors were still compelled to compete if they wanted to qualify for the Olympic Games.

On Wednesday, the International Judo Federation ordered the UAE to treat Israeli athletes equally during the tournament however  the commands were ignored.

After the event, Flicker posted a video sharing his experience:

“Once I won the gold medal, first of all I got very excited. I decided to sing Hatikva on the podium because Israel is my country and I’m proud to be an Israeli.”

He added, “The anthem of the world championship which was played was just background noise. In my heart I sang the national anthem, I’m proud of my country.”

SHAMEFUL – Watch the shocking discrimination against Israeli athlete Tal Flicker as he wins GOLD at the Judo Grand Slam in Abu Dhabi, but is denied the Israeli national anthem and flag.Well done to Tal who sang the words to Hatikvah despite his anthem not being played.Shockingly, this tournament is a qualifier for the Olympics, so the Israeli athletes were forced to compete without representing their country or else they wouldn't be able to compete in the 2020 Olympics.When will the world stand up to this bigotry and hatred? It is an absolute disgrace!#Judo #Israel #AntiSemitism #ChristiansAgainstAntiSemitism

Posted by Christians United for Israel – UK on Thursday, 26 October 2017

“The whole world knows we are from Israel, and who we are representing. The fact they hid our flag… everybody knows where we are from.

“We’ll do anything to get to Abu Dhabi and end up on the podium,” he wrote. “Everyone in the world knows where we are from and which country we represent. I am the most proud to be Israeli.”

Speaking of his achievement, he said, “We came very concentrated on the competition. We were very focused. We had one goal which was to bring home a medal and I’m very glad we did it.”

WATCH: When Israeli judoka Tal Flicker won a gold medal at the Judo Grand Slam in Abu Dhabi, anti-Israel haters refused to display the Israeli flag or play the Israeli national anthem. This is his message to the world.Sports are meant to bring people together, not to promote hate. Join more than 100,000 people in the fight against hate of Jews and Israel at PeaceNotHate.com

Posted by The Israel Project on Thursday, 26 October 2017