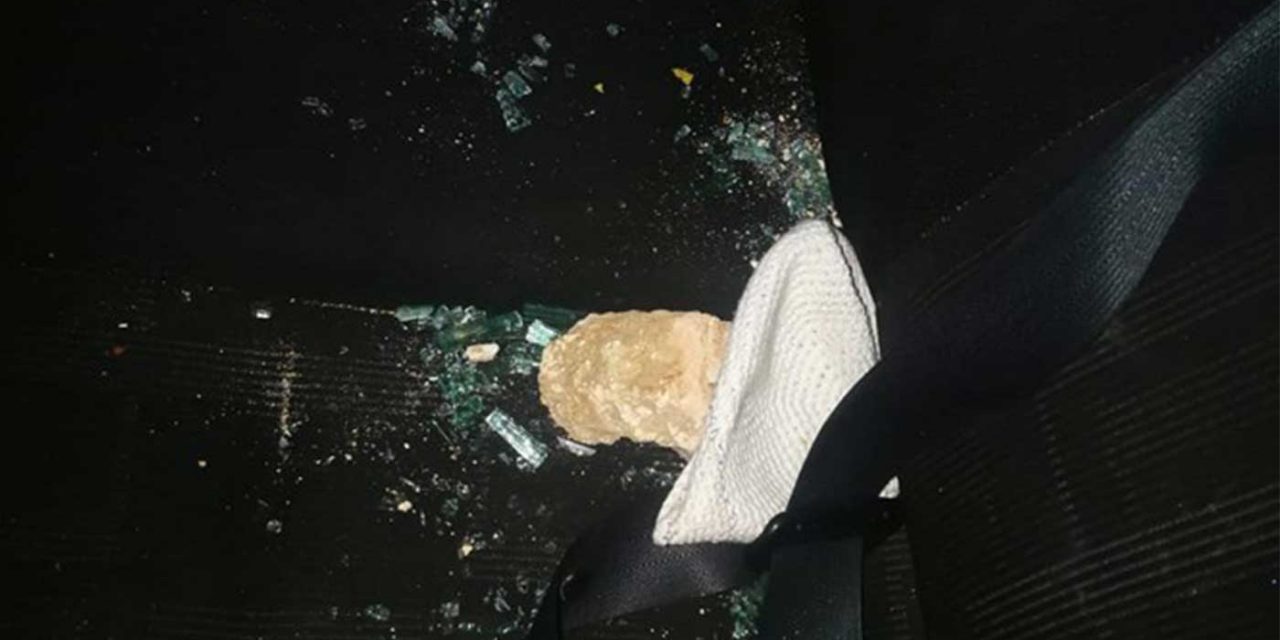 An Israeli mother and her children were attacked by Palestinian terrorists who threw a large rock at their car on Saturday evening.

Some of the children were injured, with the 11-year-old boy being hit in the head by the rock. The other children had shrapnel from glass smashing on them. After the car was hit the mother continued travelling to a Jewish community where the children were treated by IDF forces.

Inbal Hillel was driving on Saturday night with her four children from Jerusalem toward their home in Karnei Shomron, when stones suddenly hit her car.

“We were on our way from Jerusalem to our home in Karnei Shomron, on a route that we know is safe and pleasant. Suddenly, two medium-sized stones were thrown at the vehicle,” Hillel told Army Radio on Sunday.

“I heard a loud blast. The two older children screamed and cried and my little one, a six-month-old baby, was screeching. I didn’t know how badly they were injured. They just screamed that there was blood and shielded each other from the glass that was flying in the car.”

“I called the emergency services and reported the injury. I told them that I’m not willing to stop at the side of the road and that I’m continuing to drive to the gate of my community and the security forces should meet me there.”

The trip to the settlement gate took about ten minutes, during which Hillel still didn’t know how badly her children were injured. They were covered with blood due to broken glass but Hillel didn’t lose her composure. “I gave them the phone with the flashlight and asked them to do a scan on each one, especially the 6-month old baby. She had a lot of blood from shrapnel in her head, just a small piece, but she had a lot of blood and it scared us a lot.”

“I asked them to check exactly what was there,” she added. “We thanked God together that the stone didn’t wound them, they were in good condition and that nothing happened to me from the trauma. We just said Tehillim (Psalms) together until we reached [Karnei Shomron].”

“I glanced back at them every couple of minutes and talked to them. I saw they were all right. My son was hit on the head and I kept talking to him, making sure that he remained conscious. I preferred to stop at the entrance to the community where the emergency forces would wait for us and not stop in the middle of nowhere.”

“My son had an open wound on his head,” she said. “They have shrapnel wounds on their faces, hands and necks and shrapnel in their eyes.”

Hillel shared her feelings after the difficult incident. “There is a sense of frustration and anger at [Palestinian] teenagers who wander around and instead of doing something useful with their time, they do things like this. I got an update from the army during the night that the military forces are really looking for [the perpertrator].”

“I hope that this will be the last incident, that the army will show its power in the area and that no more incidents like this will occur. We have to show them who is the boss, to show our strength in our country,” Hillel concluded.