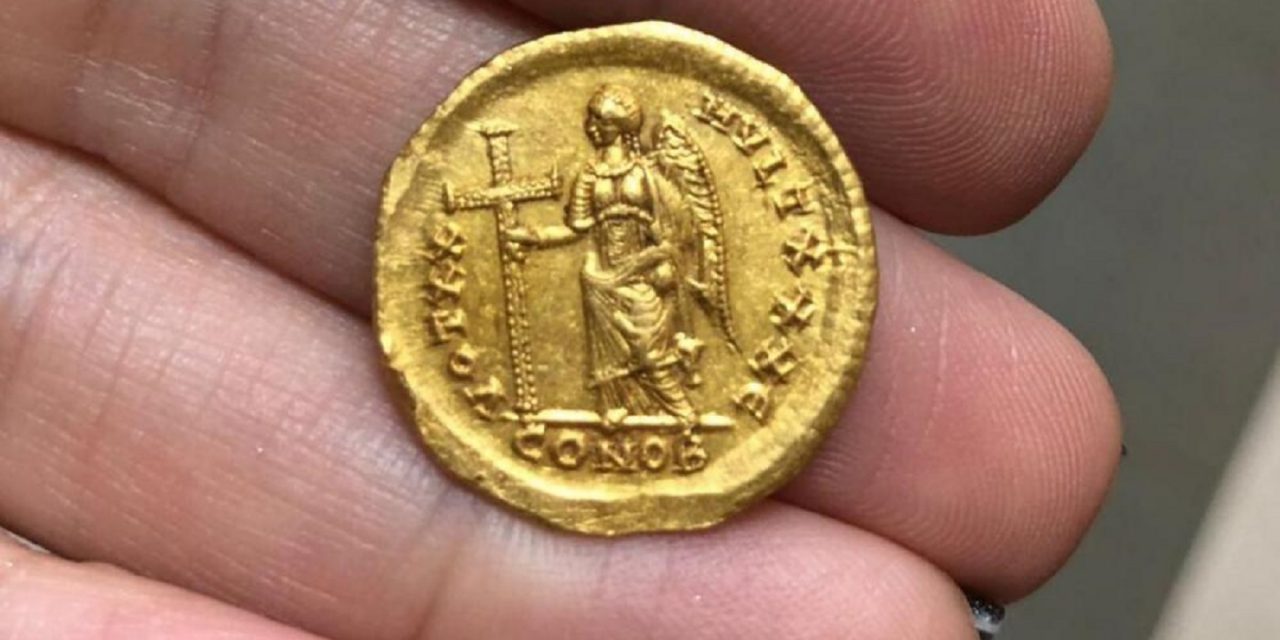 In February 2019, four ninth-grade students from the Haemeq Hamaaravi High School in Kibbutz Yifat in the Jezreel Valley found a gold coin minted by the Byzantine Emperor Theodosius II.

The four pupils, Ido Kadosh, Ofir Sigal, Dotan Miller, and Harel Grin, stumbled upon the coin while exploring the fields alongside the Zippori stream in the Galilee, adjacent to the Sanhedrin Trail. They immediately recognized that this was no ordinary coin and alerted their geography and history teacher Zohar Porshyn, who contacted the Israel Antiquities Authority.

“The gold coin is a solidus minted by the emperor Theodosius II in Constantinople (now Istanbul) around 420–423 CE (AD). Similar coins are known from the Eastern Byzantine empire, but this is the first of its type discovered in Israel. One side depicts the image of the emperor and the other shows the image of the [goddess] Victory holding the Staff of the Cross,” explained IAA numismatic expert Dr. Gabriela Bijovsky.

Theodosius II was one of the most influential emperors of the Byzantine Empire, compiling an Imperial Code of Laws, designated the ‘Codex Theodosius’.

Jews were banned from military and civil service and were not allowed to build new synagogues.

“The emperor Theodosius II abolished the post of the ‘Nasi,’ the Head of the Sanhedrin Council, and decreed that the Jews’ financial contributions to the Sanhedrin be transferred to the Imperial Treasury,” said Yair Amitzur, IAA chief archaeologist of the Sanhedrin Trail.

“The Sanhedrin Trail initiated by the IAA tells the story of the Jewish leadership in the Galilee at the time of the Mishnah and the Talmud in the Roman and Byzantine periods. It is symbolic that the gold coin discovered adjacent to the Sanhedrin trail reflects the period of dramatic events when the Sanhedrin ceased to function in the Galilee, and the center of Jewish life transferred from the Galilee to Babylon,” said Amitzur.