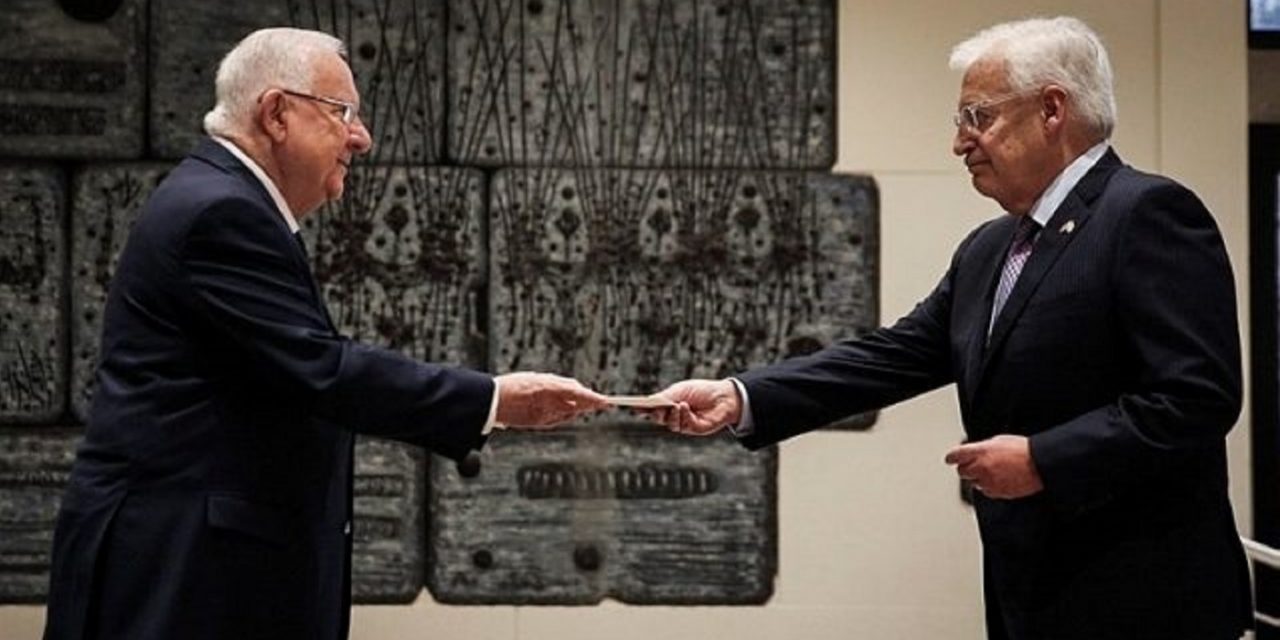 David Friedman, the new US Ambassador to Israel, officially took office on Tuesday when he presented his diplomatic credentials to President Reuven Rivlin at a ceremony at the President’s Residence in Jerusalem.

Friedman was accompanied by his wife Tammy and daughter Talia.

After Friedman presented his credentials to Rivlin, he signed the official guest book, and was joined by the president at the entrance to the residence for the Israeli national anthem, Hatikva.

In his remarks, Rivlin pointed out that although Friedman has been to Israel “many times before,” this time “you are an ambassador representing the USA, Israel’s greatest, and most important ally.”

Commenting on President Donald Trump’s visit to Israel next week, Rivlin said it “is very important. It is a sign of the unbreakable bond between Israel and the USA.”

Rivlin then touched on the issue of Jerusalem’s status, which may become a sticking point between Israel and the US. Trump promised to move the US embassy in Israel to Jerusalem, but has yet to announce the move.

“Next week, we will celebrate 50 years since Jerusalem was united, and the Jewish people were able to once again pray at the Western Wall. But Jewish Jerusalem is not 50 years old. Since the days of King David, this city has been our capital. It is time for the whole world to recognize Jerusalem as the official capital of the State of Israel. De facto, not just de jure,” he declared.

Friedman will reportedly take up residence in Jerusalem, while he will work out of the embassy in Tel Aviv and hold all official events at the ambassador’s residence in Hertzeliya.

In his remarks, Friedman noted that Rivlin, “as a seventh generation Jerusalemite, you continue the connection to Jerusalem that began with King David some 3000 years ago.”

He said that serving as the US ambassador to the State of Israel “is the greatest honor of my life,” and pledged to “do all that I can to strengthen and enhance the relations between our two great nations – that you accurately described as unbreakable and, I would add, without limits.”

He stressed that Trump sent him to his posting “with the unequivocal and unambiguous mandate to support the State of Israel in every way, and in all ways.”

“As you know, the President has chosen Israel as the site for his first international visit this coming week. His love for and commitment to the State of Israel is rock solid and enjoys his highest priority,” said Friedman.

“I look forward to working with you and the people of Israel to do even more to bring together the United States and Israel — in every field, from culture to education, life sciences, high technology, commerce, trade, and of course military and strategic cooperation and so many other things,” he concluded.