Israel offers support to Spain: “We are no strangers to grief” 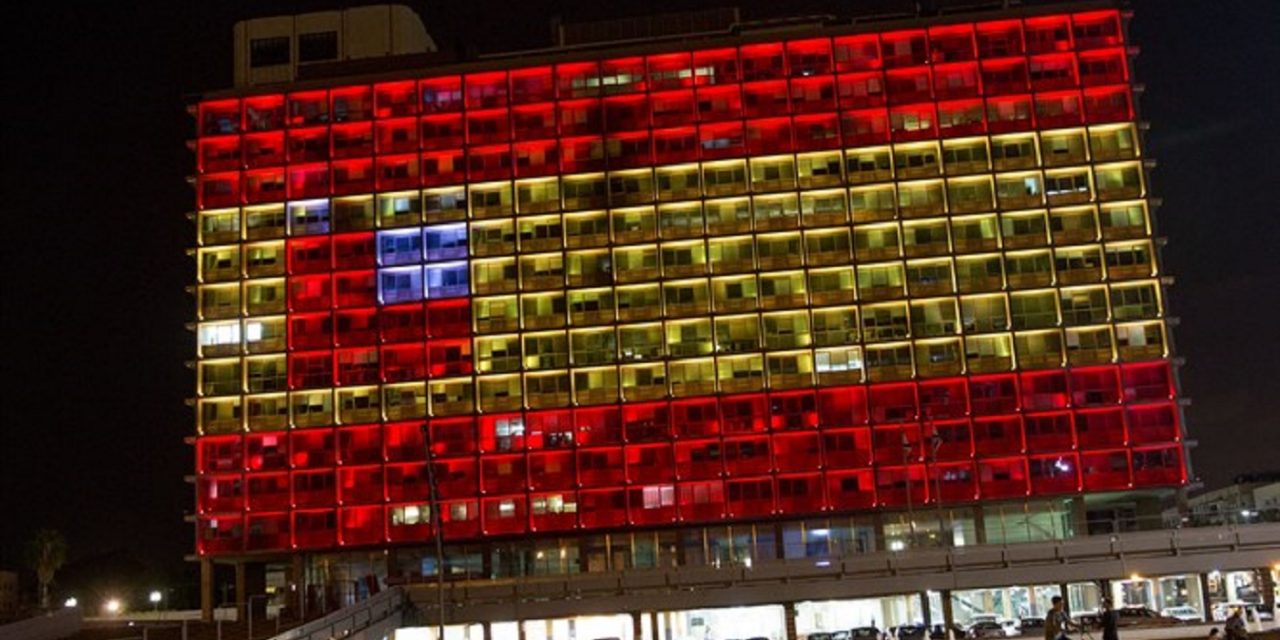 Tel Aviv’s City Hall lit up in red and yellow on Thursday night in solidarity with Spain after a deadly terror attack in Barcelona, joining other landmarks around the world.

In reaction to the attack, which has been claimed by Islamic State, Prime Minister Netanyahu expressed his condemnation, saying: “Israel condemns the terrorist attack in Barcelona. On behalf of the citizens of Israel, I send condolences to families of the victims and wish a speedy recovery to the injured.”

After todays #terror attack in #Barcelona the building of the @TelAviv municipality was lit with the flags of @SpainMFA and @IsraelMFA pic.twitter.com/jlDJrUYvgt

Fourteen people were killed and 100 were injured, 15 of them seriously, when a white van veered onto a promenade and barrelled down the busy walkway in central Barcelona on Thursday, swerving back and forth as it mowed down pedestrians and stopped in front of the Jewish restaurant, Maccabi.

Hours later, an Audi rammed into pedestrians in the seaside town of Cambrils, some 120 kilometers away. The attacks were thought to be linked.

“Terror is terror and Israel stands by the side of the people of Spain as we pledge to fight all those who seek to harm the free world,” a statement released by Israel’s Ambassador to the United Nations Danny Danon to his Spanish counterpart, read.

Prime Minister Benjamin Netanyahu has arrived at the @IsraelMFA situation room and is receiving updates on the events in #Barcelona. pic.twitter.com/NBECceLOcD

Israel’s Deputy Minister of Foreign Affairs Tzipi Hotovely said, “I condemn this deplorable act of terror and senseless death and stand with Spain with prayers for the fast recovery of the victims.”

Israeli President Reuven Rivlin on Friday morning sent a letter of condolence to His Majesty King Felipe VI of Spain, following the terror attack in Barcelona on Thursday night.

In his letter, Rivlin wrote, “We have heard with horror and shock of the vicious terrorist attack in Barcelona that has taken the lives of so many innocent people and injured so many more. Our hearts and thoughts are with the people of Spain at this difficult time.”

“Sadly, we, in Israel, are no strangers to the horror and grief that follows such murderous attacks and can truly understand the pain you all feel now.

“Terrorism is terrorism is terrorism, whether it takes place in Barcelona, Paris, Istanbul or Jerusalem. These horrific events once again prove that we must all stand united in the fight against those who seek to use violence to stifle individual liberty and freedom of thought and belief, and continue to destroy the lives of so many.

“The people of Israel stand with me in mourning the sad loss of life and the suffering.

“Please convey our sincere condolences to the bereaved families and to the people of Spain and our wishes for a speedy recovery to all the injured.”

Sending my condolences to King Felipe VI & the people of Spain. Terror is terror, & we must all stand united in the fight against it. pic.twitter.com/HhjRbwlax6