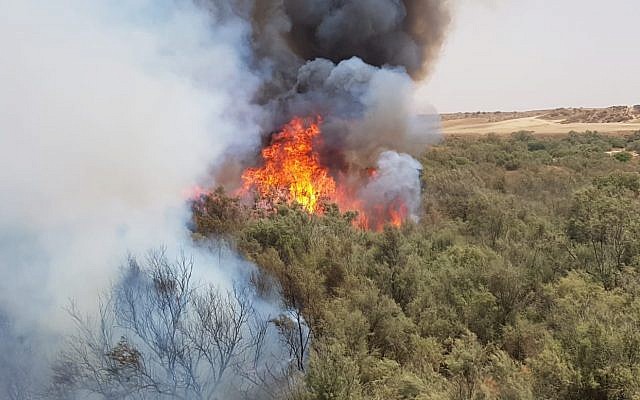 Firefighters battled a number of large blazes on Wednesday as Israelis sought to stay cool during an intense heatwave that set records for highest recorded temperatures in July.

The wave of fires came amid a serious heatwave throughout the country, with the Israel Meteorological Service recording temperatures as high as 43°C (109°F) in the Red Sea resort city of Eilat.

At Beit Dagan in central Israel and Negba in the south, the highest ever temperatures in July were recorded, while the 41°C (105°F) in the Gaza area was also the highest ever documented during July.

Several large fires broke out in the afternoon at the Horshim Forest in central Israel and the Ahihud Forest in the north, as well as at the Churchill Forest near Nazareth Illit.

Seven firefighting crews and four firefighting planes were also working to put out a massive blaze near Kibbutz Re’im east of the Gaza border, one of 10 fires that broke out along the border since the morning.

A spokesman for the rescue service said one of the fires near Gaza was sparked by an incendiary balloon. At this stage, he said, there was no indication the remaining blazes were caused by flaming airborne devices.

Elsewhere, police and firefighters were working to extinguish a fire at the southern West Bank settlement of Karmei Tzur. The army said the fire was caused by a number of Molotov cocktails that were thrown at the settlement’s security fence.

The fire spread toward the first line of homes in the hilltop community and caused significant damage to at least three of them. Emergency crews managed to evacuate residents from the area and no one was injured.

The Israel Meteorological Service said temperatures were set to drop substantially on Thursday to near their average for this time of year, with even lower temperature expected on Friday and Saturday.

Kahlon signed off on the recommendations of the drought committee on Wednesday, which brought together officials from the Tax Authority and Agriculture Ministry.

The decision frees up relief funds for farmers of crops that are expected to be affected by any water shortages. According to a Finance Ministry statement, these include wheat, barley, oats and chickpeas.