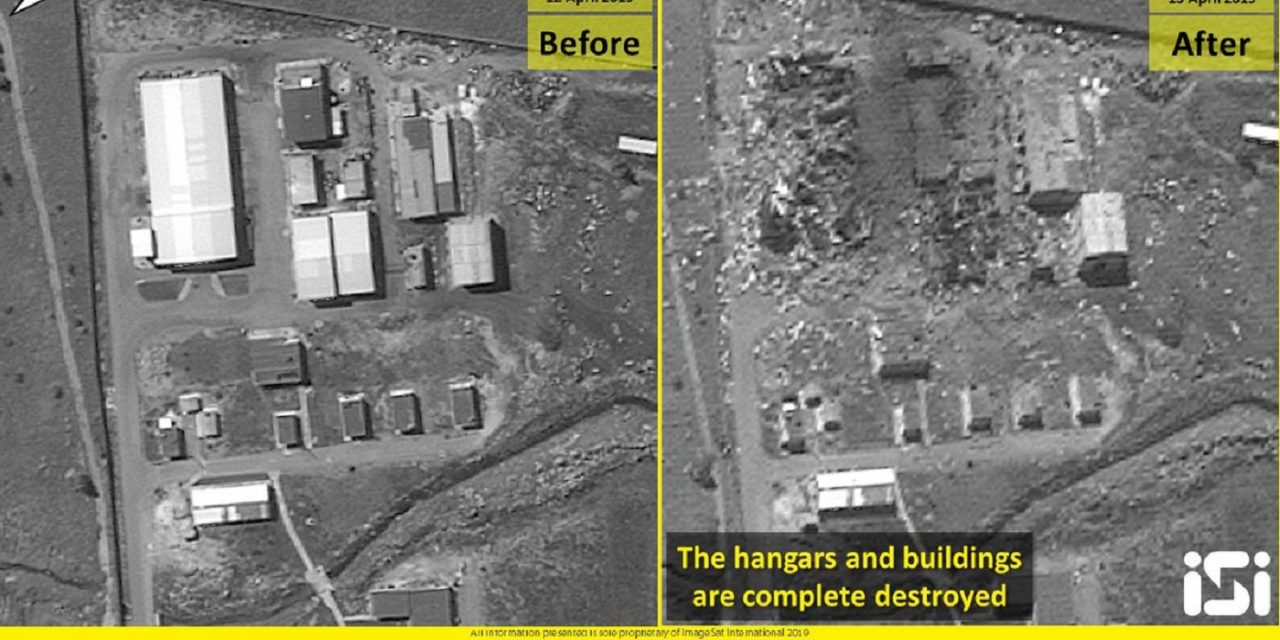 A Syrian missile production factory linked to Iran was struck in airstrikes on Saturday attributed to Israel.

According to a report by the London-based Syrian Observatory for Human Rights in Arabic, Iranian “elements” and pro-Iranian militants were killed in the alleged attack, and 17 people were injured.

Israel does not regularly comment on alleged strikes in Syria, though it has acknowledged some previous operations.

#Israel|i based @ImageSatIntl released a video of comparison on the Before and after 12 April strikes in #Masyaf, #Syria. Completely destroyed structures which were missile manufacturing hangars, related to #Iran (#IRGC) were located. pic.twitter.com/wS3QyXfIHv

However, comments by Prime Minister Netanyahu on Sunday alluded Israel’s actions in Syria.

“We are continuing to operate on all fronts, including the northern one,” said Netanyahu as he addressed an event in Jerusalem for families of fallen IDF soldiers.

“We are not hasty to enter into battle,” he said.

“Who knows better than we do that the price of war can be devastating,” he said, speaking to bereaved families and referring to the death of his own brother Yoni in Israel’s 1976 operation at the Entebbe, Uganda airport to free Jewish hostages held by Palestinian hijackers.

“But let no one be mistaken. We will not allow anyone to entrench its might and endanger the State of Israel,” said the prime minister,  who has often spoken of Israel’s determination to remove Iranian military influence from the north of Israel’s border in war-torn Syria.”

The Observatory said Saturday that the strike targeted a Syrian military college in the town and two buildings used by Iranian forces in nearby villages — a development center for medium-range missiles in Zawi and a training camp in Sheikh Ghadban.

Iran has been one of the top military backers of Syrian President Bashar Assad’s regime in the over nine-year-long civil war in the country, as has been its Lebanese proxy, the Hezbollah terror group.

@ImageSatIntl releases Sat Imageries and the analysis of the aftermath of the #IAF airstrike in Maysaf Area #Syria 13.04.19. pic.twitter.com/RmWPGJ0Y4F

SANA quoted a military source as saying on Saturday, “Around 2:30 am (2330 GMT Friday)… the Israeli air force carried out a strike targeting one of our military positions in the town of Masyaf,” adding that Syrian air defenses intercepted some of the missiles.

Israel is said to have previously struck the area near Masyaf, home to a Syrian scientific research center. Western officials have long associated the Scientific Studies and Research Center near Masyaf, known as CERS, with the manufacture of chemical arms.

Iran routinely threatens to destroy Israel, which has vowed not to tolerate an Iranian military presence on its borders.

The most serious wave of airstrikes on Syria this year occurred in January, when the Israeli military hit several Iranian targets, responding to an Iranian missile attack a day earlier. The Iranian launch followed a rare Israeli daylight air raid near the Damascus International Airport.