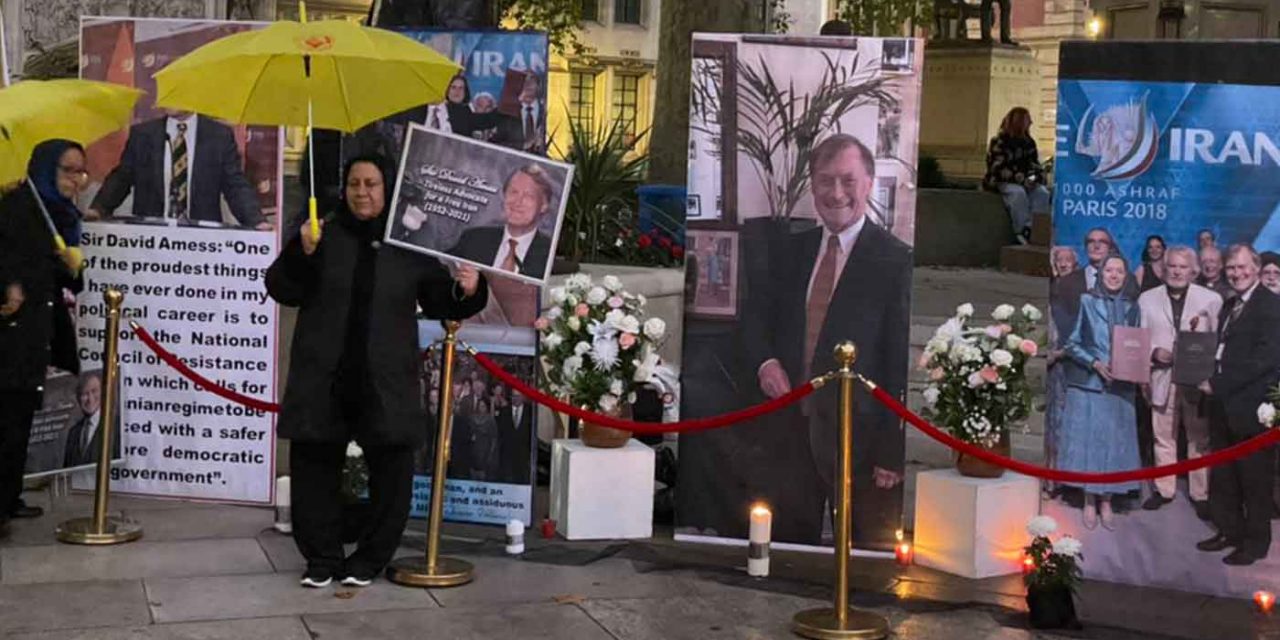 The Iranian resistance movement is mourning the loss of their good friend Sir David Amess who worked to bring about freedom and democracy in Iran for over thirty years and spoke out against the crimes of the Iranian regime.

The National Council of Resistance of Iran, which is the main opposition party to the Iranian regime but is outlawed in the country, have spoken out about the profound sadness of losing such a dear friend and close ally.

Sir David Amess was proud to stand with the organisation, once saying: “One of the proudest things I have ever done in my political career is to support the National Council of Resistance of Iran which calls for the Iranian regime to be replaced with a safer and more democratic government.”

Moving vigil to Sir David Amess put on by the Iranian Council of Resistance.

Abedini explained how the group had held a vigil for the late MP and over 3,000 had visited the event.

Maryam Rajavi, the president-elect of the NCRI, offered her condolences, saying, “Profoundly saddened, I offer my deep condolences on the passing of Sir David Amess due to a criminal stabbing. He was an honourable friend of the Iranian people and the Iranian Resistance in their quest for freedom and democracy.”

“Today, the Iranian Resistance lost an extraordinary friend, and the people of Britain lost a great advocate of freedom and democracy. David Amess was a staunch enemy of dictators, especially the mullahs’ tyranny. Sir David will always remain in our thoughts.”

Profoundly saddened, I offer my deep condolences on the passing of Sir #DavidAmess, due to a criminal stabbing. He was an honorable friend of the Iranian people and the Iranian Resistance in their quest for freedom and democracy. pic.twitter.com/DhehNjk2iG

In life, Sir David was an advocate for freeing Iran from the grips of tyranny.

He chaired the British Committee on Iran Freedom and regularly spoke out against the Iranian regime’s human rights violations, their funding of terror groups such as Hamas and Hezbollah and said Iran’s threats of “wiping the state of Israel out of existence is absolutely disgraceful.”

In 2018, Sir David led the UK delegation of parliamentarians to a Free Iran conference in Paris. Shamefully, the event was targeted by Iran, with Belgian police intercepting 550g of explosives, the same kind used in the Manchester Arena Bombing, which were transported by an Iranian diplomat. French officials later said the diplomat was running an Iranian state intelligence network and was acting on orders from Tehran.

Undeterred, Sir David continued his work against the regime. In fact, a few days before his murder, Sir David wrote an article on Iran and called for Iran’s President Ibrahim Raisi to be brought to justice for his part in the crime of sentencing 30,000 Iranians to death for opposing the regime.

In July 2021, speaking via video link to the event, he proudly displayed two books showing over 100 signatures from current MPs and members of the House of Lords that he had helped to personally gather. Sir David said proudly that the statement they signed “rejects the brutal religious dictatorship in Iran and supports the Iranian resistance.”