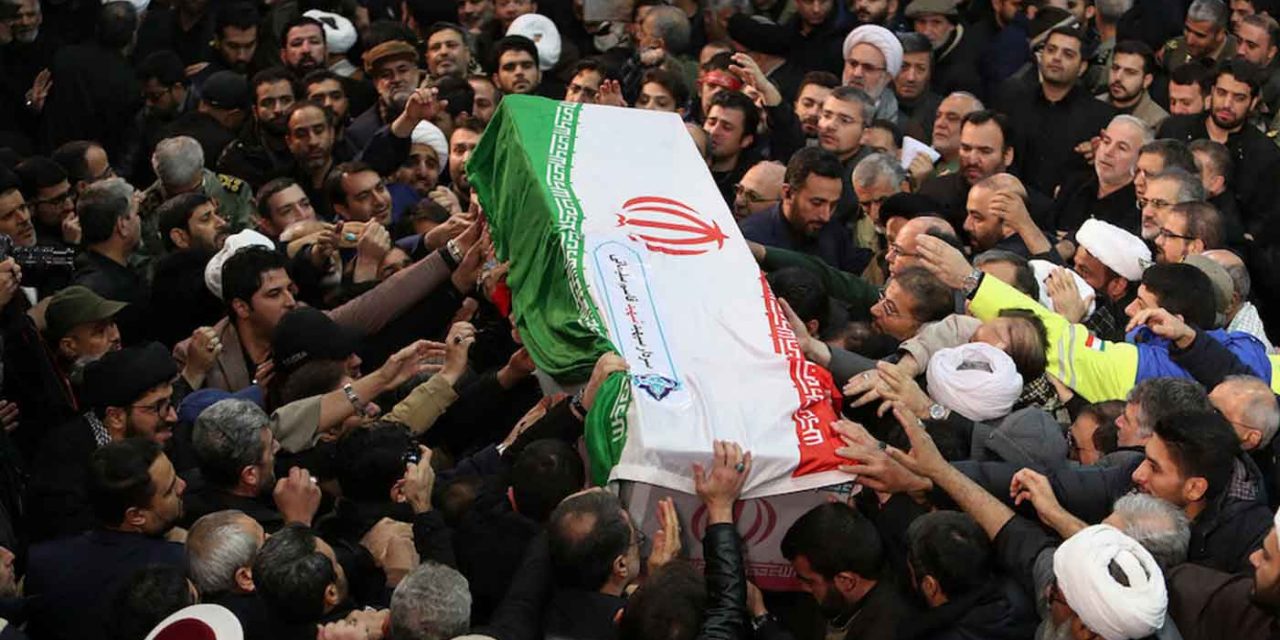 Iranian officials have threatened to kill British troops and level the Israeli cities of Tel Aviv and Haifa on top of their threats towards the United States.

The Iranian regime is seething after its top general and national hero was assassinated by a US drone strike last week. Qasem Soleimani was Iran’s point man on using terrorist organisations, including Hezbollah and Hamas, to sow chaos, death and destruction in the Middle East and beyond. Also killed was Abu Mahdi al-Muhandis, the commander of Kata’ib Hezbollah. Muhandis was a leading figure in the recent riots attacking the US Embassy in Baghdad.

On Monday, a senior commander in the Quds Force, the Iranian Revolutionary Guard’s international arm, said that British soldiers could be “collateral damage” in attacks on the US military.

“Our forces will retaliate and target US troops in Middle East without any concern about killing its allies, including UK troops, as this has turned into a fully-fledged war with much collateral damage expected,” the commander, who was close to Soleimani, said.

“We are very clear and have identified our targets and will fight with Americans. We request UK, the key US ally, and other western allies, including the Nato alliance, to not stand with this Trump regime, to avoid wider collateral damage in Iran’s response as it conducts foreign military operations against US after Soleimani’s assassination.”

In addition to the threats against the UK, Israel has also been threatened. A former Islamic Revolutionary Guards Corps commander on Monday threatened to attack Israel if the United States replies to Iran’s awaited military response to the assassination of Iranian General Qasem Soleimani.

“If the US takes any action after our military response, we will level Tel Aviv and Haifa to the ground,” Mohsen Rezayee, the Secretary of Iran’s Expediency Council, said in comments published the by Fars News Agency.

The main target of Iran’s anger, however, is the United States.

Speaking at her father’s funeral, Zeinab Soleimani directly threatened an attack on the US military in the Mideast and said that America and Israel faced a “dark day”.

Downtown Tehran was brought to a standstill as mourners flooded the Iranian capital to pay an emotional homage to Soleimani, the Quds Force commander killed in a US strike. State television said it was a “several million-strong” turnout.

“The families of US soldiers in the Middle East will spend their days waiting for death of their children,” Soleimani said to cheers, Al Jazeera reported, as a million people or more — according to Iranian estimates — gathered to mourn her father, killed in a US drone strike on Friday.

Mourners chanted “Death to America” and “Death to Israel” and waved flags of Iran, Iraq and Lebanon among others, as they marched down Tehran’s Enghelab Street on Monday morning.

Khamenei, who had a close relationship with Soleimani, wept at one point during the traditional Muslim prayers for the dead. The crowd and others wailed.

Khamenei is reading a supplication in Arabic and crying over the body of #QassemSoleimani and #AbuMahdiAlMohandes #Iran #العراق #Iraqi #Iranattack #USA pic.twitter.com/cfheS2QugY

What Soleimani “provided to Palestine and the resistance has brought them to the position they are in today in terms of power and steadfastness,” Haniyeh said, according to a report on Hamas’s website.

“I say that the martyr leader Soleimani, who spent his life supporting the resistance as the head of the Quds Force in the Iranian Revolutionary Guard…is the martyr of Jerusalem,” Haniyeh said.

Iran provides support to Hamas and more direct backing to Palestinian Islamic Jihad and Lebanon’s Hezbollah, all of which are sworn to Israel’s destruction.

“I affirm that the resistance project in Palestine to confront the Zionist project and resist the American domination project will not be broken, be weakened or hesitate,” Haniyeh said. “It will continue along its firm path, the path of resistance, until it drives out the occupiers from our land and Jerusalem.”

BREAKING: What has to be the biggest ever funeral seen in the history of the world is currently underway. pic.twitter.com/XOvWslBVU3

The UK’s Prime Minister Boris Johnson said in a statement released on Sunday: “General Qassem Soleimani posed a threat to all our interests and was responsible for a pattern of disruptive, destabilising behaviour in the region.

The Prime Minister warned that “all calls for retaliation or reprisals will simply lead to more violence in the region,” adding that the UK “is in close contact with all sides to encourage de-escalation”.