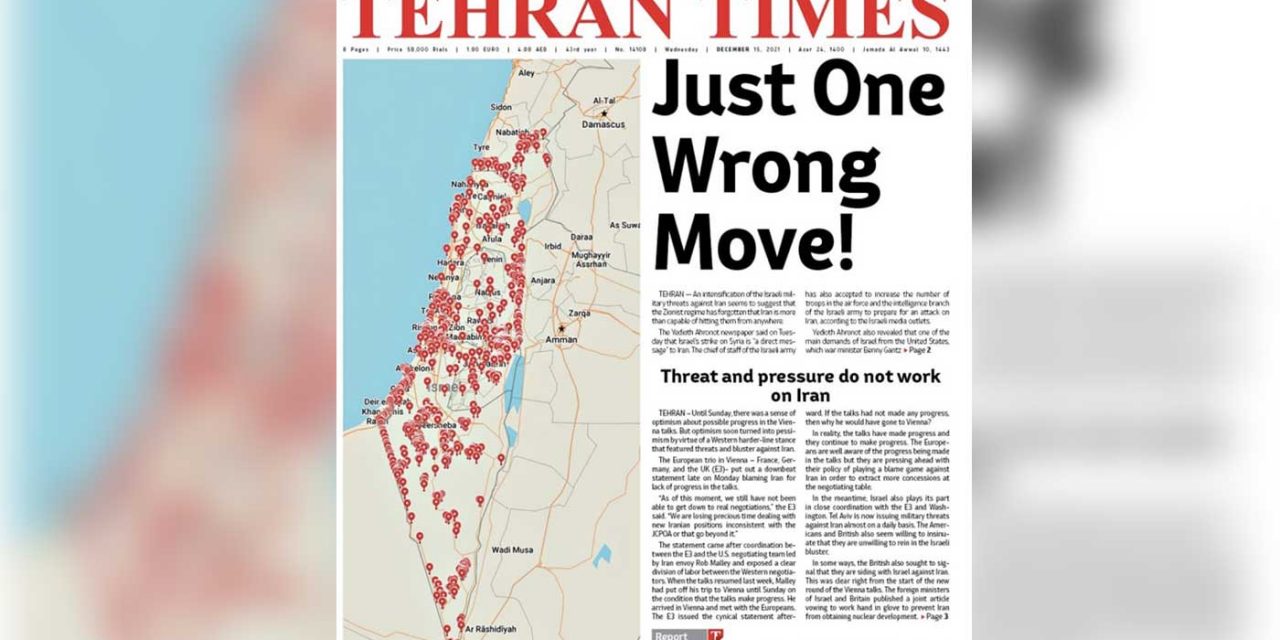 The Iranian regime’s mouthpiece, the Tehran Times, has printed a map of Israel marked with “targets” that it says Iran can strike “at any time”.

The map at first appears ominous, listing hundreds of Israeli locations for it to strike. And let’s be clear, Iran is a very real threat to Israel after all. However, when looked at closer, it comes off as a bit farcical.

The article begins: “An intensification of Israeli military threats against Iran seems to suggest that the Zionist regime has forgotten that Iran is more than capable of hitting them from anywhere.”

Regime-controlled Tehran times has illustrated a map of #Israel with pinned areas as rocket targets (like red alert map), apparently they’re not just threatening Israelis, check the pinpointed areas & find out that they are threatening Gaza and Palestinian cities as well!! #Iran pic.twitter.com/RvII09wZDg

The article continues with quotes from Iranian military Major General Mohammed Bagheri, who said that Iran “never underestimates” threats from an enemy.

“Despite our confidence in the deterrence situation… We are prepared for the smallest of threats in the strategic field,” Bagheri said.

Bagheri also told the Tehran Times that while Iran “does not intend to strike anyone,” it was prepared at the “operational and tactical level” for a “decisive response and quick and tough offensive.”

The article ran under the headline “Just One Wrong Move!” and featured a “map of Israeli targets,” which showed nearly every populated community in the country labelled with a red dot.

The targets on the map are presented by the newspaper as official targets of Iran’s military. If these really are the targets, then they are a little misguided.

Almost every location in Gaza is listed, the same with Palestinian towns in the West Bank (Judea and Samaria). These areas are claimed to be Palestinian, not Israeli. (Is Iran now admitting that the entirety of Israel is now Israel, including Palestinian lands?)

While the map appears to be inaccurate, we still have to be wary of the very real threat Iran presents to Israel.

The Iranian military clearly knows where Israel’s cities are and likely has some good intel on Israel’s military targets also.

The Iranian regime is developing weaponry to attack Israel from long range. Iran has also funded terror groups surrounding Israel, such as Hezbollah in Lebanon and Hamas in Gaza. Each of these terror groups has thousands of rockets ready to fire at Israel thanks to Iran.

We also have to be aware of Iran’s nuclear ambitions. The regime is trying to gain nuclear capabilities, acquire nuclear weapons and eventually use that weapon against Israel. It is a very real threat to Israel that the world must take seriously.