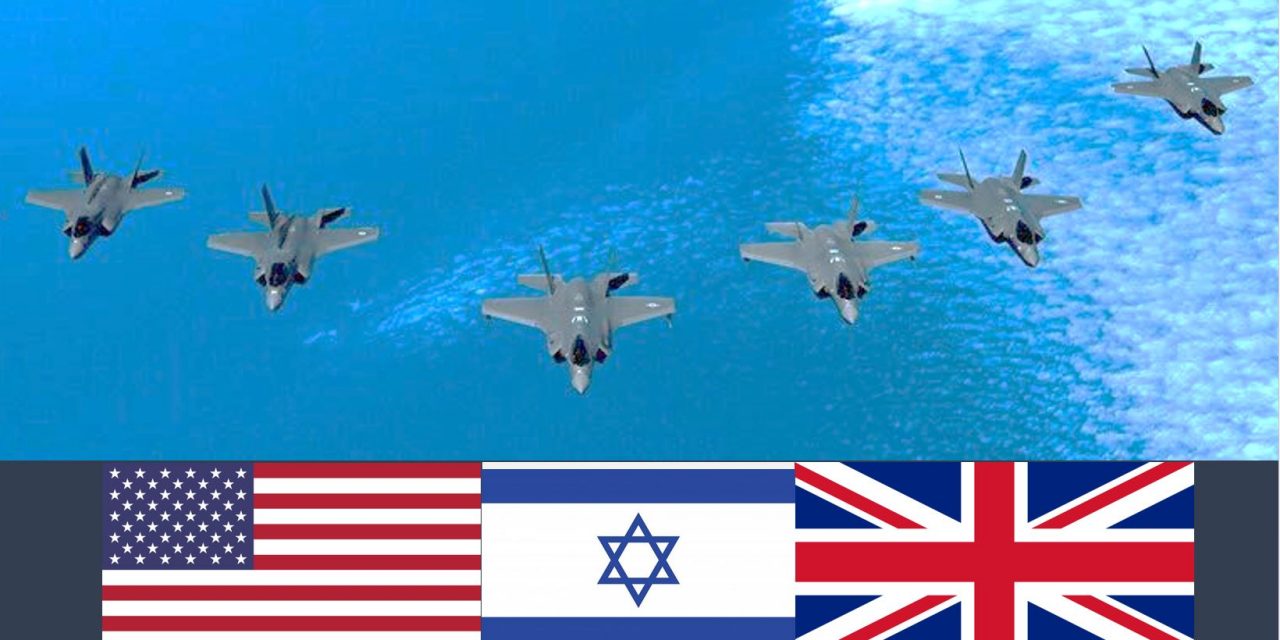 The UK, US and Israel have conducted the first ever F-35 joint exercise over the skies of the Middle East.

The IAF, USAF and Royal Air Force drill nicknamed “Tri-Lightning” was a “demonstration of the interoperability between the US, UK, and Israel.”

This marked a significant show of military cooperation between the three countries – the first to employ the Lockheed Martin F-35 Lightning II Joint Strike Fighter (JSF) in combat.

In the skies of the Middle East, 🇺🇸, 🇬🇧, and 🇮🇱 aircraft fly side by side as part of the Tri-Lightning exercise led by the @USAirForce that took place this week.

USAF reported, “This exercise is a demonstration of the interoperability between the US, UK, and Israel using the F-35A, F-35B, and F-35I, respectively”. The F-35s played the role of friendly, or ‘blue’, forces against other aircraft types playing the role of enemy, or ‘red’, forces.

On Tuesday, the United Kingdom said its F-35 fighter jets had also conducted their first missions, flying sorties over Iraq and Syria as part of the fight against the Islamic State terror group.

As one of the world’s leading air forces, the IAF regularly leads and participates in international exercises, including its flagship biennial Blue Flag drill.

“International cooperation between Israel, the US and Britain strengthens our joint interests and our new, exclusive capabilities in the Middle East,” said IAF Chief of Air Staff Brig. Gen. Amnon Ein-Dar.

📹 🛫 History has been made over the last week as UK F-35s have completed their first operational missions over Iraq and Syria #F35UK @RoyalAirForce @RoyalNavy https://t.co/40p34lErUc pic.twitter.com/ajOtKzPUTb

The Israel Defense Forces received the fifth-generation stealth fighter from the United States’ Lockheed Martin defense contractor in late 2016 and declared it operational roughly a year later. In 2018, the Israeli Air Force revealed it had used the F-35 operationally — including at least once over Lebanon — making it the first military in the world to do so.

“The first international air exercise involving Israeli F-35 planes alongside foreign F-35 planes was held yesterday. The exercise was held over the Mediterranean Sea and simulated survival scenarios and defense against varying threats from advanced aircraft, including the F-35 plane,” the IDF said in a statement.

The Israeli Air Force said it planned to hold additional international exercises with the stealth fighter jets in the future in order to “advance its capabilities.”

The Islamist terrorist who took hostages at the Texas synagogue made anti-Semitic and anti-Israel comments, despite the FBI initially claiming it was not directly targeting Jews.The FBI...
Read More
Share
Tweet
Email
More
594 Shares