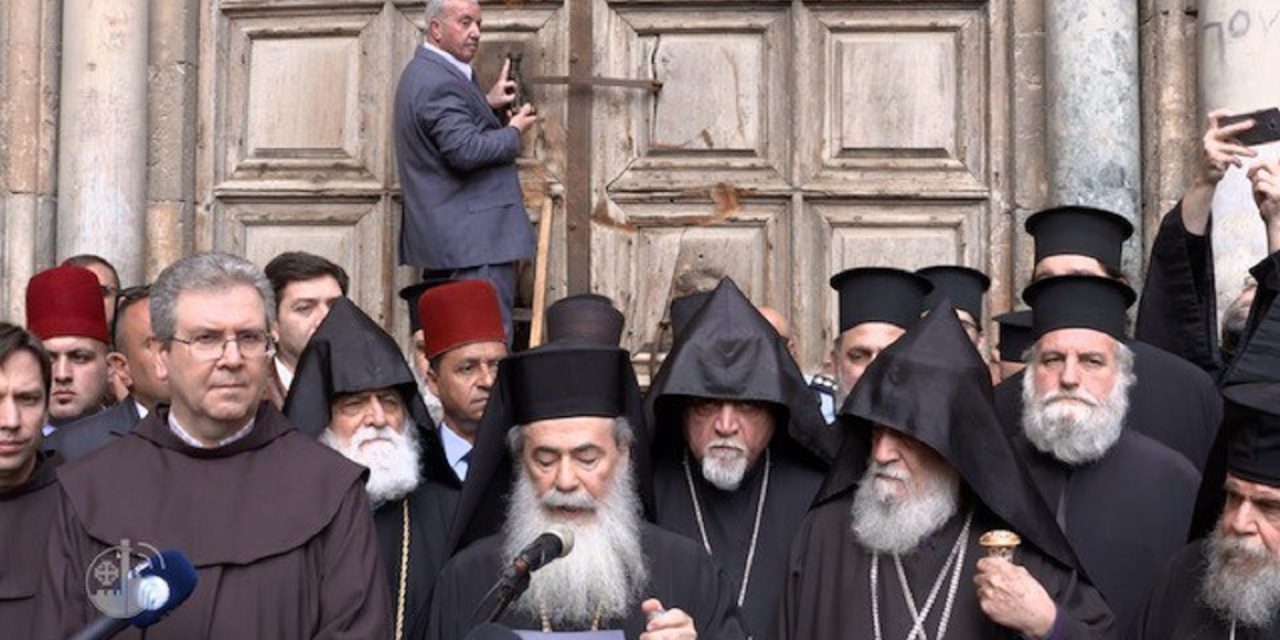 The Church of the Holy Sepulchre in Jerusalem took the rare step of closing its doors two weeks ago in protest of new measures by the Jerusalem municipality to tax commercial property belonging to the church.

The controversy prompted the Archbishop of Canterbury to write to the Israeli Ambassador to the UK in opposition to the plans, whilst the King of Jordan also weighed in. The protest was also used by Hamas in an attempt to demonise Israel and win over support from Palestinian Christians.

The church in Jerusalem, believed by some to be the place of Jesus’s crucifixion and burial, and visited by thousands of pilgrims each year, remained closed for three days, the longest closure since 1990. It was only opened after the plan was suspended following intervention by Prime Minister Netanyahu.

Protesters say that the status quo in Jerusalem, which dates from the 18th century, includes an understanding that land owned by the Churches cannot be confiscated or taxed. This article isn’t attempting to undermine those expressing genuine concerns about the new measures, but calls into question how the protest was used by some to demonise Israel.

Amid the dispute was an anti-Israel tone in which church leaders in Jerusalem called the decision an “attempt to weaken the Christian presence in Jerusalem”, a “systematic campaign of abuse against churches and Christians” and compared the city’s plans with that of antisemitic laws that Jews experienced in Europe.

The Church of the Holy Sepulchre, like all religious sites in Jerusalem, is exempt from paying taxes. This would not have changed under the new plan, despite those protesting not making this clear in their narrative. However 887 church properties, on which there are not places of worship, would have to pay a total of 650m shekels (£122m) in uncollected taxes.

Jerusalem Mayor Barkat said all churches were exempt from the tax changes and that only church-owned “hotels, halls and businesses” would be affected.

A separate property law has also been proposed by a Knesset member, but not yet been passed, which is meant to protect Israelis living on former church land sold to private developers from the risk these companies will not extend their leases.

But in a bizarre spin of events, church leaders in charge of the Holy Sepulchre – the Roman Catholic, Greek Orthodox and Armenian Church – said it “reminds us all of laws of a similar nature which were enacted against the Jews during a dark period in Europe”.

This attribution to the Jews was echoed by the church’s key-holder, Adeeb Joudeh Al-Husseini, Muslim custodian of the church key, who told i24news in a live interview that it was the “Jewish government” that wanted the church to pay taxes.

The legislator promoting the bill, Rachel Azaria, said, “I understand that the Church is under pressure, but their lands will remain theirs, no-one has any interest to touch them ever.

“My bill deals with what happens when the right over the lands are sold to a third party.”

Hamas and Palestinian Authority use protest to demonise Israel

Meanwhile, the Hamas terror organization used the dispute to call for an escalation of the “al-Quds Intifada” against what it called Israel’s “religious war on the Palestinians and their Islamic and Christian holy sites.”

Fawzi Barhoum, a spokesman for Hamas, which controls the Gaza Strip, said in a statement that the quarrel between the churches and Israeli authorities illustrated the “dangerous repercussions of US President Donald Trump’s decisions and the policies of his administration,” adding that these “target the Palestinian existence and the Palestinian rights, as well as reinforce the racist and extremist Jewish state.”

The Palestinian Authority also linked the Church of the Holy Sepulchre’s closure to the US plan to move its Israeli embassy.

“It’s time for President Trump and his administration to realize the consequences of their encouragement for the Israeli policies of occupation and exclusivity in Jerusalem,” Palestine Liberation Organization head Saeb Erekat said after the churches’ decision was announced.

“The dramatic reality of the Palestinian people in Jerusalem, and particularly of our churches, should be a reminder of the need to end the Israeli occupation,” Erekat was quoted as saying on the Twitter page of the PLO’s negotiations department.

The statements of Hamas and the Palestinian Authority are clearly using the protest to win support of of Palestinian Christians. The patriarchs and heads of main churches in Jerusalem were opposed to the US recognising Jerusalem as Israel’s capital and tried to urge President Trump from making the decision.

A Jordanian government spokesman said that the kingdom rejected the “systematic” measures by Israeli authorities to alter the status quo in Jerusalem, and urged Israel “to immediately reverse the decisions taken against churches and to respect its obligations as an occupying power in East Jerusalem in accordance with international law.”

In the joint letter to Mark Regev, the two leaders spoke of Israel’s “unprecedented, punitive and discriminatory taxation of Christian institutions” and their fears that the dispute could inflict long-term damage on relations between the two communities.

The letter said new laws to push through the tax demands “threaten to cause serious damage to the Christian presence in Jerusalem, to Christian families, and to the Christian institutions, including hospitals and schools, which serve many of the poorest people, regardless of their background”.

Punitive and discriminatory taxes on #Jerusalem's churches clearly threaten the status quo at the city's holy sites. @CardinalNichols and I have urged the Israeli government urgently to address this crisis and enter talks with churches: https://t.co/JuknoE5tUS pic.twitter.com/thzqXWcVpV

Jerusalem Mayor Nir Barkat noted in a statement that the Church of the Holy Sepulchre, like all churches, is exempt from city taxes and that nothing in the current proposal stands to alter that situation. “But does it sound logical to anyone that commercial areas like hotels, wedding halls and businesses should share this exemption, just because they are owned by the churches? Why should the Mamilla Hotel pay municipal tax while the Notre Dame Hotel across the street is exempt? I’m sorry to say that for too many years, the state has blocked the municipality from collecting these taxes for commercial areas, which have reached a staggering NIS 650 million! It’s illegal and illogical.

“Either the state has to give us back these funds, which are meant to develop the city, or we will continue collecting them from the churches, as the law requires. We will not agree to have Jerusalem residents cover the bill for these inordinate sums,” Barkat said.

Difference between worship and commercial facilities

Former Deputy Mayor and Hebrew University Law Professor Shimon Shetreet said, “There is a difference between worship facilities and commercial facilities owned by the church. Many years ago there was a similar issue with yeshivot (Jewish educational institutions focusing on Torah and Talmud) that have wedding halls. There was also the case of the Bar Association with a party hall. Places of prayer are not taxed. Places of parties are subject to taxation. There are also stores owned by churches and synagogues that pay tax. Why not? Nobody is charging houses of prayer, so these protests are totally misleading.”

A statement from the office from the Israeli Prime Minister said Benjamin Netanyahu and Jerusalem Mayor Nir Barkat have established a team to formulate a solution for the issue. The team will negotiate with the representatives of the churches to resolve the issue, and the Jerusalem Municipality is suspending the collection actions it has taken in recent weeks.

His office says “Israel is proud to be the only country in the Middle East where Christians and believers of all faiths have full freedom of religion and worship. Israel is home to a flourishing Christian community and welcomes its Christian friends from all over the world.”