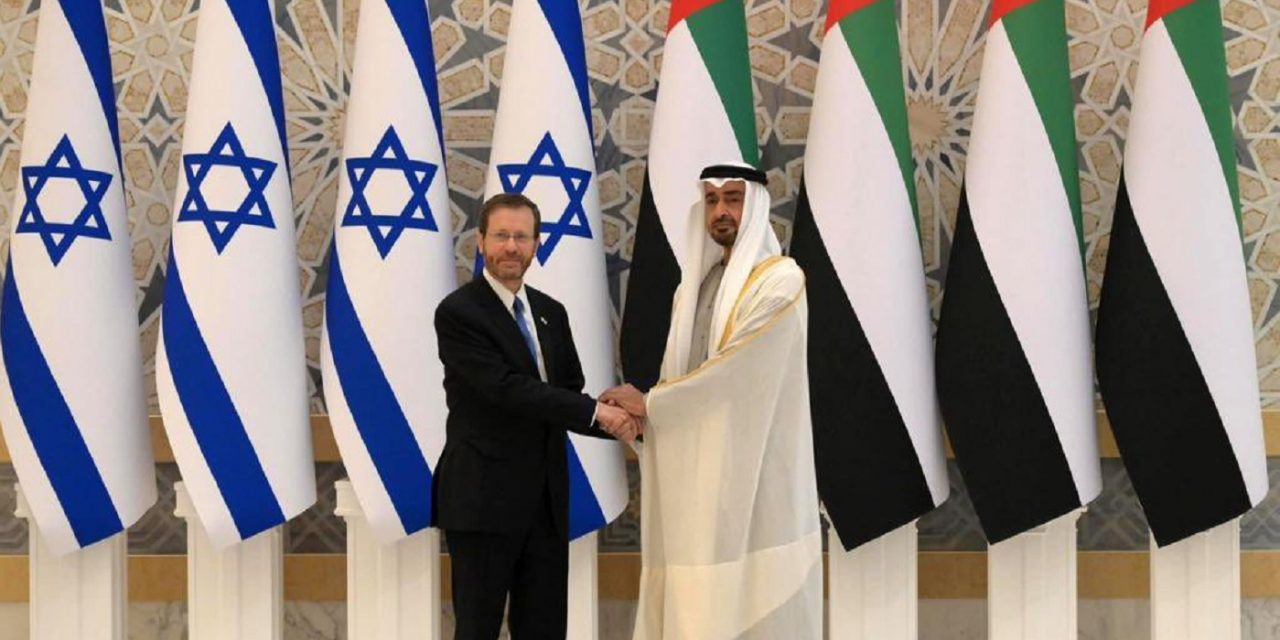 “It was emotional to see the President of the State of Israel here in an Arab country for the first time in history,” – Rabbi Elie Abadie, senior rabbi of the Jewish Council of the Emirates

President Isaac Herzog and his wife have completed a historic visit to the United Arab Emirates – the first for an Israeli president.

President Herzog and the first lady were welcomed at the Dubai expo with an honour guard, followed by the raising of Israel’s flag at the site’s central plaza and the playing of Hatikvah.

Opening Israel national day, he called the pavilion “a practical display of cooperation between nations, of the future we can all imagine”.

“This imagination turned into reality right here, when the UAE and its leaders daringly signed the historic Abraham Accords,” he said.

The night before, the UAE announced it shot down a ballistic missile fired at it by the Iran-backed Houthi terrorist group.

According to the President’s office, the two men discussed the bilateral relationship in trade, investment, tourism, and innovation.

History in the making! 🇮🇱🇦🇪

During the visit President Herzog said the Middle East had a stark choice of possible futures.

“There are only two alternatives for this region,” he said. “One is peace, prosperity, cooperation, joint investments and a beautiful horizon for the people, or alternatively, what Iran is doing, which is destabilising the region and using its proxies to employ terror. These are the two alternatives, and this visit symbolises hope, peace and a great future for our nations, the region and the world at large.”

Herzog also met with Jewish leaders on Sunday night. Rabbi Elie Abadie, senior rabbi of the Jewish Council of the Emirates, told Times of Israel, “It was emotional to see the President of the State of Israel here in an Arab country for the first time in history.”

Earlier in the day, Herzog met with the Crown Prince of Abu Dhabi, Sheikh Mohammed bin Zayed Al Nahyan, known as MBZ, for over two hours.

Israel's President Herzog landed in the #UAE today, a first for an Israeli presidential visit to the country. pic.twitter.com/oNOzBqNkz7

“We are sending a message to the entire region that there is an alternative of peace and living together, and that the sons and daughters of Abraham can reside and dwell together in peaceful coexistence for the benefit of humanity,” said Herzog.

The sentiment was echoed by MBZ, who stated, “Through peace, we in the UAE, Israel and the wider region can direct resources and capabilities towards serving our nations and paving the way for a better tomorrow.”